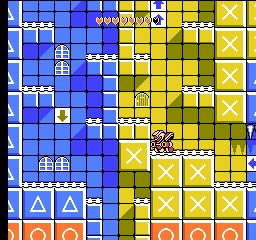 I really miss Taito as a publisher. I realize that technically they still exist as a part of Square Enix but between their arcade output and console games they were once a known quantity worldwide and that has been lost. They were somewhat underrated back in the day too; everyone knows Capcom and Konami but Taito were right there releasing classics like Bubble Bobble, Shadow of the Ninja, and Little Samson. One cool little game we didn’t get was Robocco Wars, an action game starring a transforming robot and its human pilot. The premise sounds reminiscent of Mega Man but gameplay wise it is anything but. Despite its Japanese exclusivity there is very little text so anyone can enjoy this little gem.

The best way to describe Robocco Wars is a platformer/shooter hybrid. Of the games nine worlds the focus is clearly on platforming as you control your mech as this comprises the majority of the game but you also take flight in ship form, and travel by sea as a submarine. Unlike most titles that span multiple genres equal attention has been given to all three parts making this an enjoyable ride from start to finish. While there is no standout feature Robocco Wars is still worth tracking down.

When in robot form the game is a standard platformer, albeit one on wheels. Since you have treads instead of wheels the physics are a little different with momentum playing a factor. Once you adjust you’ll find great level design along the lines of mega man. There aren’t many power ups to make things more interesting however your default weapon is plenty powerful as is and only gets stronger as you progress. It should be noted that they had to get a bit creative in terms of enemy designs considering these levels are comprised of land with train tracks. The level design is varied and creative, with multiple routes to the exit, vertical drops, and tunnels. It gives off a similar feel to Kirby’s Adventure although this was released a year or two before that game. Even the stage names such as Sweet Castle, Selena Island, Rainbow Syrup, Starlight Smile, and Mysterious Dream are evocative of that series. In my opinion that’s good company to be in although this isn’t nearly as varied.

When it’s time to move on to the next island you’ll transform into an airplane or submarine for some quick shooting action. These sections are nice diversions if a bit simple. Mechanically they are sound but compared to other shooters on the market they are a bit simple, especially the submarine. Granted the only thing to compare it to is Sqoon but they could have jazzed up the underwater portion of the game a little bit. Perhaps that is why there are only two sub levels compared to three plane sections.

Partially because of its excellent pacing but mostly by design, Robocco Wars is pretty easy overall. Your life bar starts at three hearts but every platforming stage will increase it by at least one and up to a maximum of eight. That is overkill in my opinion. Generally life restoring hearts drop regularly and the few tough bosses still have easy to recognize patterns. Not even limited continues poses much of a deterrent to most reaching the end in short order. The easy difficulty will make the game’s nine stages fly by, making you wish there more.

The simple visual style is bright and colorful along the same lines as Kirby’s Adventure but obviously not as great as that title. The presentation seems heavily tilted towards the shooter segments as it seems the artists really put a lot of work into making these levels look great. The backgrounds here are highly detailed and sometimes abstract and just look great. The lone outlier would be the submarine portions which are a bit bland. You can’t even use the excuse that it is underwater; Capcom’s the Little Mermaid did an awesome job of providing visual variety in the same environment. I found the music to simply be decent; there are a few catchy tunes but for the most part the soundtrack is simply unmemorable.

Robocco Wars would have been a cool addition to the NES library had it been released worldwide. Granted in 1991 some truly standout games in the action genre were released so it might have been lost in the shuffle but at least it would have been exposed to a wider audience. There is no language barrier to overcome so for those plumbing the system’s library this is an easy sell.