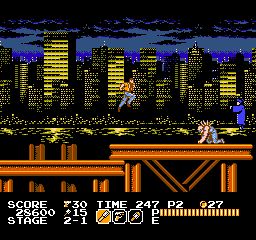 As with any console there are plenty of games that slipped through the cracks on the NES.  Considering the state of the industry at the time and the lack of publications extensively covering the system at first it should come as no surprise that some truly great games have gone unappreciated.  There were so many games to choose from I could make 3 or 4 of these lists (there’s an idea).  These are in no particular order and just some of the games I feel deserve more love.

Though the Bucky O’Hare cartoon was short lived gamers reaped the benefit as it survived long enough to produce a cool arcade game and this excellent, excellent platformer. To a degree you can view this as Konami’s take on Mega Man as you have free reign to rescue the members of your crew in whatever order you choose. The quest isn’t done once they’ve assembled as the game still has plenty of fun yet challenging levels to test your skills against. Konami once again work their magic with the NES hardware to produce one of its best looking games with an awesome soundtrack to boot. Unfortunately the game was released at the tail end of 1992 when the 16-bit war really heated up and so was overlooked. Don’t make the same mistake as everyone else and seek out one of the NES’s finest.

There were a slew of really great NES titles released in 1992 that flew under the radar and Little Samson might be the best one. This might be Taito’s finest game for the NES as it combines the best elements of many classics such as the character switching from TMNT and the tight platforming of Mario to create one phenomenal adventure. All four heroes will see their share of uses throughout the course of this lengthy quest and their mechanics will ensure that you can tackle the many levels in numerous ways. It also doesn’t hurt that this is probably one of the top 10 best looking games for the system. It sucks that it’s a bit rare so if you see it at a decent price snatch it up fast.

3. Monster in my Pocket

No not Pokemon. The confusion is warranted as I’m sure Pokemon would have been called Pocket Monsters if this did not exist. As a series of popular figurines and a card game Monster in my Pocket was ripe territory for a video game with Konami doing the honors. The concept of little characters in a big world has been done to death at this point but MIMP still manages to be entertaining through its nuanced platforming challenges and veritable rogue’s gallery of creatures. To some extent this is what Castlevania would be if Simon Belmont didn’t control like a senior citizen. Wow that came out worse than I thought. Regardless MIMP was not a popular game and can be found dirt cheap, which is a bargain in my book considering its quality.

Yes that is Jackie Chan throwing a hadoken at a frog.  I foolishly avoided Jackie Chan’s Action Kung-Fu based purely on its goofy commercial and super deformed style. That turned out to be my loss as it is one of the better action games for the platform, easily keeping company with Ninja Gaiden and Shatterhand. The large variety of martial arts moves at your disposal keep the game fresh as you punch and kick your way up the mountain to save your sister. The only real criticism I can lobby at the game is its short length but it doesn’t matter as you’ll more than likely play through it again and again since it’s so much fun. The stylized look not only gives the game a distinct look but also allows for larger sprites and better animation. For my money this was Hudson Soft’s best NES game.

Talk about obscure, there are still plenty of gamers who have never heard of Vice Project Doom. Released to little fanfare Vice Project Doom is basically what Ninja Gaiden would be if it traded ninjas and mysticism for good old fashioned spy espionage. Even that description is selling it short. The game covers quite a range of genres such as the driving of Spy Hunter, platforming and the first person action of Operation Wolf all while the story unfolds with cut scenes in between levels. But its primary focus is still its side scrolling action at which it excels. Why the game is still so underrated is a mystery but don’t pass it up as it is excellent.

A chef fighting waves of angry food come to life might sound ridiculous but it’s no more absurd than an overweight plumber stomping on goombas and eating mushrooms. Panic Restaurant takes its silly premise and runs with it, using its combination of responsive and balanced weaponry to create an enjoyable romp that’s over a little too soon. Chef Cookie will pick up various dining instruments to use as weapons such as a fork, spoon, and even dinner plates. The difficulty is perfectly balanced with a suitable curve that ensures that you won’t simply breeze through it. Sadly this is one of the rarest NES games and usually goes for hundreds of dollars.   But! If you somehow find a sucker selling it cheap go for it!

I love a good puzzle game every now and then and Kickle Cubicle is excellent. Residing in the same category as the Adventures of Lolo Kickle Cubicle tasks you with collecting all of the red dream bags in a single screen puzzle room. Unlike that game however there is a timer to add that extra bit of tension. Rather than pushing blocks and eggs like Lolo instead you’ll create and manipulate ice for numerous effects. The level design is downright genius at times and with a little bit of creativity there is often more than one way to solve a particular puzzle. There are even boss battles for that extra touch to make an already good game great.

My favorite RPG for the NES and in my opinion one of the system’s best the Magic of Scheherezade combines the action of Zelda with a turn based battle system in a strange combination that works. As the unnamed hero you are on a quest to defeat the evil wizard Sabaron and find your one true love. The adventure will remind you of Chrono Trigger as there is time travel involved and combination spells during random battles however Scheherezade came first. The Arabic setting is still unique within the genre and the bevy of features and mechanics all add up to one of the most memorable 8-bit adventures I embarked on.

We all love to hate the red bastard Arremer in the Ghouls n Ghosts series yet his solo adventures are so god damn good. Starting with his original Gameboy adventure Firebrand takes center stage as he fights to save the Demon World from disaster. His NES outing is criminally overlooked do once again to its release in 1992. As a combination action game with RPG trimmings the game excels in both fields has plenty of optional content to extend what is already a decently lengthy adventure. Structurally it bears some similarities with Metroid as more areas of the demon world are accessible once you’ve gained certain abilities. Capcom rarely disappointed in the 8-bit era and Gargoyle’s Quest 2 is another feather in their cap.

Kemco ported a number of point and click adventures to the NES and while I’m particularly fond of Déjà Vu I recognize Shadowgate as the better game. The game is dripping with atmosphere, from its ethereal and foreboding soundtrack to its tale of a lone hero sent to save the world from an evil warlock. The puzzles are downright clever at times but what really made the game stand out were its at times graphics death scenes. This was released when Nintendo of America were at their worst in terms of censorship so the fact that so much of Shadowgate’s content remained intact is a miracle. Shadowgate’s success would also lead to Déjà vu and the Uninvited, with all three being surprisingly playable despite the limited interface.