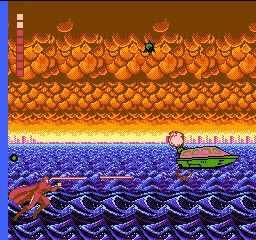 I can distinctly remember reading about so many NES games in Nintendo Power that were scheduled to be released in the US but were cancelled for one reason or another. For the longest time once a game was cancelled that was that and you would never hear about it again. But in these modern times those lost games can be unearthed and enjoyed by all thanks to thanks to kind folks like the guys over at the lostlevels.com.  Sunman was never even officially announced before it was cancelled so the fact that a more or less complete version of the game is available is a miracle. Sunman appears to be an innocuous release at first but it doesn’t take long to realize that this is really a Superman game under a different name.

I imagine the thinking behind Sunman was to do for Superman what they had already done for Batman. After the dire Superman game from Kemco anything would be better. But somewhere along the way, whether the license was unavailable or if they had cold feet when considering the NES market in 1992, Sunsoft changed gears and turned this into an original property. That wasn’t an unprecedented move for them; Journey to Silius was originally a Terminator game and changed for similar reasons. But to a greater extent than that game it is fairly obvious what Sunman originally started out as. Maybe that is why it was cancelled. While I’d like to say we missed out on a lost gem in all honesty Sunman has issues and would have needed an overhaul to make it more interesting.

Despite being developed by two separate companies Sunman is eerily similar to Taito’s Superman game for the Genesis which in turn was loosely based on their own coin op of the same name. The two games even have near identical first levels that begin on the rooftops before transitioning to a fast paced scroll up the side of a building. Both games severely limit their protagonist in terms of abilities except in Sunman’s case it is even worse. Aside from the ability to fly at any time you’ll have to rely on your fists to get by. Heat vision is restricted to specific boss battles which is incredibly lame. I wouldn’t have minded this so much if there were items or anything to break up the monotony but you get nothing at all, not even extra health. Combine that with stiff controls and the game is already off to a bad start.

The game’s Return of the Joker DNA is apparent in terms of the level design with many sequences seeming very familiar. Both games feature a level that takes place aboard a train and the many auto scrolling shooter stages further attest to this. At the very least these segments are enjoyable if not familiar. However the rest of the game’s level design isn’t as strong and is rendered moot since you can fly. The elaborate platform challenges and traps can simply be flown over although some of this seems to be intentional.

In spite of the game’s brevity actually making it to the end is a task in itself. The lack of any power-ups is a bad decision all around and makes the game incredibly frustrating, not to mention boring. Combine that with the short attack range and relentless swarms of enemies that attack at odd angles and you can die in seconds. You’ll have to either memorize each level’s layout completely or play to perfection since you can’t afford to make mistakes. The last two levels are especially brutal with a ridiculous number of enemies thrown in your path. Those two credits will disappear fast. Considering the game is so short I can see why Sunsoft bumped up the difficulty but it doesn’t make an already flawed game any more endearing.

With its large sprites, multiple layers of parallax, and bass heavy soundtrack its obvious Sunman is using the same engine as Return of the Joker. That means the game looks fantastic although not to the same extent as that game. Partially because this is short there isn’t as much variety in locales. The grittiness of Batman’s world lends itself to the NES’s limited color palette. The visuals presented here look as though they should be brighter but it is clear the artists were working against the system’s limits.

I can see the kernel of a good game buried in Sunman but it needed a lot more work. Chances are even Sunsoft knew this and weren’t willing to commit the time to get it right. We didn’t miss anything special.