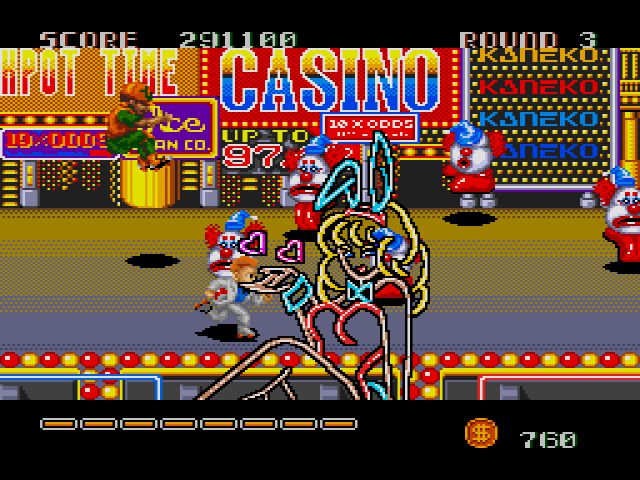 What the hell happened here? How could Kaneko mess up a simple port of DJ boy so badly? Let’s be clear, I’m not holding up DJ boy as some paragon of the genre. It was simply an enjoyable brawler with a unique aesthetic and well within the Genesis’ capabilities. This sad home port loses most of the arcade games charm and is simply a bad game.

Donald J. Boy is well known in the streets and when he hears about the Rollergames, a street fighting/racing competition he decides to sign up. However the Dark Knight gang say uh uh and kidnap DJ boy’s girlfriend Maria. It’s the typical save the princess shlock we are accustomed to and a far cry from the coin op.

That plot is wildly different from the arcade and if you can believe it only slightly less dumb. In it Michael Jackson and DJ Boy are break dancing to Beat It when a couple of Prince fans steal their boom box. Apparently they were angry that everyone thinks Thriller is better than Purple Rain and said enough is enough. The chase then ensues.

Alright I made some of that up but the difference in “plot” is only one of the changes made to the game. I call this a port in the loosest sense of the word. The Genesis version of DJ Boy is more inspired by its coin op big brother and that wouldn’t be a problem if the game were actually good. But between the terrible level design and flat gameplay I wonder why they bothered. This should have turned out so much better.

Mechanically this is a pretty simple brawler. Your offense is limited to simple punches and kicks with a jump kick and really weird double punch making up your roster of moves. Punches are drastically inferior to kicks due to limited reach. If you build up some speed and kick few enemies will ever be able to counterattack. It’s simple but what makes this so interesting is that it all takes place on roller skates. Skating around and building up momentum could have been an interesting mechanic but the limited move set means you’ll simply button mash all day. It also doesn’t help that the hit detection is suspect, rearing its head most often during boss battles. Where the standard enemies are brain dead idiots the bosses require a bit more finesse. Like your typical beat em up they have a life bar that dwarfs yours and can kill you in a few hits. Each will require a specific form of attack to take down making these probably the only engaging parts of the game.

New to this version is the shop in between levels where you can spend the coins dropped by defeated enemies. The store offers a variety of power-ups to spend your coins but outside of replenishing health and buying an extra life they are mostly useless. Supposedly you can increase the power of your attacks but I did not notice a significant difference.   Increasing your skating speed sounds useful but lining up attacks is already unwieldy due to momentum and the viewpoint. The game would have been better off if these items dropped during the levels instead of wasting your time.

There have been some changes to the game, mostly to tone down some of its more offensive elements. The first boss, Big Mama, was an offensive black stereotype nanny who farted constantly for no reason. Here her skin color has been lightened and she throws pies instead. The fire breathing homeless man (!) who undressed to reveal his Chippendale body is now fully exposed from the start. Some of the more….outlandish enemies that resembled flamboyant Village People have also been removed. But the largest and unfortunate change comes in the level design. While thematically similar they differ drastically and not for the better in my opinion. Stage 2’s Subway featured a large variety of enemies to battle but here has been reduced to a high speed run through the underground with an ill-advised segment that limits your view to a spotlight. The construction site of stage 4 is similar with none of the cool background interaction. There are good ideas in here buried under bad execution unfortunately.

If for some god forsaken reason you actually want to see this to its conclusion you’ll have your work cut for you. In the beginning when your life bar is do short it is pretty rough. As you progress however it gradually expands so that you can survive longer. But getting to that point is a hassle. The game is stingy with the burgers that refill health and the kids that drop them are easily missed. Worse than that however is the fact that there are no continues and you only have one life. It’s beyond stupid and will make you question if they wanted anyone to even play the game.

If you are brave (or stupid) enough to persevere and finish the game you will be treated to an overly dramatic and badly translated ending that is the perfect conclusion to a terrible game. I liked DJ Boy in the arcade and to see the game butchered so badly is just sad. This is among the worst Sega Genesis games I’ve ever played.