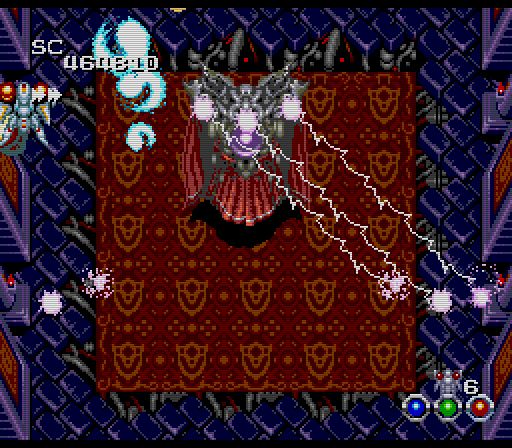 Games like Seirei Senshi Spriggan are the reason I wish the Turbo Grafx-16 were more popular in the US. Even taking into account the glut of shooters released in the 16-bit era Spriggan would have stood out. With the masters of the genre Compile behind the wheel that should be expected but even still Spriggan is still amazing even by their high standards. If you are both a fan of the genre and don’t mind imports (it’s not as though you are missing an award winning story) you should seek this out if you can somehow avoid the high price it commands.

As an offshoot of the Aleste series Spriggan should be familiar to anyone who has played M.U.S.H.A or Robo Aleste. For the less fortunate expect large giant robots juxtaposed against a Japanese setting although in this case the Japanese influenced design is traded for a high fantasy. You’ll spend more time fighting sorcerers and other fantastical demons rather than massive mechanized ships although those are still present. While it does share a similar look to that series Spriggan differs considerably in terms of gameplay.

In terms of weapons the list is kept short at only four. Each of the four colored orbs (red, blue, green, and yellow) correspond to a different elemental alignment and a unique power such as an extremely powerful spiraling ball of wind or a water shield. Aside from the elements the occasional smart bomb is dropped and you can also sacrifice your current weapon to use as a bomb as well. The game is extremely generous with power-ups with new drops appearing every 10-15 seconds. The frequent weapon drops will allow you to take advantage of the game’s greatest asset.

On their own each weapon is adequate and will provide a secondary shield that will protect you from one hit. What truly puts it over the top is the ability to mix and match weapons and combine their effects. Like Soldier Blade you can hold up to three weapons at a time however all three are activated simultaneously and depending on the combination will produce wildly varied effects. My favorite combination is red, blue, and green which provides a circular shield, and multiple large bursts of fire in a zig zag formation that covers over 50% of the screen. Some of the effects produced are actually pretty surprising and the system encourages experimentation. While the cut scenes depict the mission as a two-man team your partner will only occasionally fly in to assist in dealing with enemies but it isn’t long before she is shot down.

In stark contrast to most Compile shooters Spriggan is surprisingly easy. The game’s hit detection is extremely generous allowing you to brush up against the largest demons without taking a hit. All of the game’s weapons are overpowered and while some enemies can soak up damage most will go down in a few hits. Weapon drops are so frequent you can even spam bombs continuously since another item will appear in less than 10 seconds to replace it. Coming from someone who more or less expects shooters to crank up the difficulty this is a welcome surprise although it does mean even the worst gamers will complete this is one or two runs.

As this was part of Japan’s Summer Carnival competition it also comes with a two-minute score attack mode. More so than some of the other entrants in the competition Spriggan truly manages to pack its two minutes with intensity as the opposition is relentless in order to build up as high a score as possible. It is in this mode that your choice of weapon will truly matter since you need to concentrate more on destruction rather than staying alive. Normally I don’t bother with the score attack in shooters but the game is so compelling I gave it a shot and was pleasantly surprised.

Spriggan bears many surface similarities to its predecessor M.U.S.H.A. but differs in a number of ways visually. The medieval setting means you’ll spend more of your time flying around castles and dungeons rather than mechanized Japanese temples and such. But seeing as they are both loosely part of the same series the mech designs are still relatively the same. The beautiful parallax scrolling so present in that game is largely absent here but the game more than makes up for it with large sprites at every turn and a generally crowded screen that rarely slows down. The cutscenes are kept to a minimum compared to something like Macross 2036 but are still pretty cool as a reward for completing a level. The pulsing techno soundtrack benefits from CD audio as the sound quality is high, allowing you to enjoy the excellent soundtrack.

When stacked up against the more than plentiful shooters that fill the system’s library Spriggan still manages to stand out due to its setting, pacing, and awesome weapons system. Even though you will complete the game in short order it still remains fun and replayable since the challenge isn’t so high. I would still recommend this to those who have experienced shooter fatigue as it is just plain awesome.