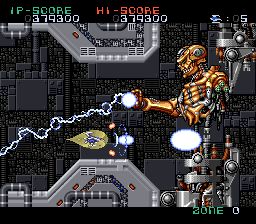 I wonder why Taito decided to rename Darius Force when bringing it to the US. Did Darius Twin leave such a bad impression that they wanted to distance themselves from it that bad? While I found that game middling it still had its good points. This isn’t the first time they’ve done this: Darius II was renamed Sagaia for some strange reason I’ll never know. Darius Twin borrowed heavily from both the original and its sequel and in that regard Super Nova is a much better exclusive effort and one that I recommend to fans of shooters in general.

When it comes to weaponry the series has always been a bit reserved which is to say it has been pretty lackluster. Thankfully that has been overhauled here. You have your choice of three silverhawks much like R-Type 3 although the difference in weapons isn’t as pronounced as that title. The green Silverhawk comes from the original Darius, the blue mirrors the ship in Darius II, but the most interesting is the new red Silverhawk. The three ships come with one primary weapon and two side weapons that can be changed with R. Each ship can upgrade its weapons to level eight at which point it changes dramatically. Personally I still found them to be a little weak (or maybe the bosses are insane bullet sponges) but you’ll needed that increased firepower as well as a shield to survive more than a few seconds in each level.

Unlike the other games in the series the way both bombs and your primary cannon are handled is different. Both weapons are upgraded at the same time here which is a plus as the game can be a bit stingy with power-ups. However using bombs reduces your main weapon’s power by one level when in use. It’s an interesting trade off and one that requires some nuance but I like it although it does make an already difficult game harder. Switching between bombs and lasers is a bit finicky in the heat of the moment but certain bosses almost require it due to positioning, adding even more strategy.

The Darius series has always marched to the beat of its own drum it terms of pacing and Super Nova is no different. This is one of the slowest paced shooters I have ever played but it is no less intense than some of the bullet hell games that have taken over the genre. Unfortunately part of that comes from the game’s reliance on enemies that spawn from behind far too often with no warning which is a petty tactic to take your lives. There is a rarely a moment when the screen isn’t crowded with 10-15 enemies as well as an array of bullets. Literally. There are plenty of enemies that explode into the stuff. You’ll never encounter any slowdown due to the pace although oddly enough you might wish for it for the second or two it would buy you to dodge fire. If you can survive long enough to reach the end level bosses you’ll be treated to multi-phase battles against all manner of crustacean that are one of the game’s graphical highlights.

Where Darius Twin scaled back the amount of choices when it came to picking a path through the game Super Nova has stepped it up. There are 15 levels altogether with a single run usually consisting of six or seven stages. Usually when there is a choice between two stages they will still share the same end level boss however the creators have given them unique attacks and patterns for the sake of variety which is really cool. Another cool feature is that there are a few stages with branching paths mid-stage! There are three critical paths to the end each with a separate ending which gives the game huge replay value for those skilled enough to actually reach the end as this is one of the hardest games in the series.

The series has a reputation for being challenging but I found Super Nova to be particularly brutal. Until you’ve upgraded your weapons to a moderate level (I would say about level 3 or 4) you’ll be hard pressed to take out every enemy in a formation and unfortunately it is necessary for items to drop. Enemies spawn from behind routinely which is completely unfair and I’m not exaggerating when I say that once you lose your shield death is not far behind. This is the only game in the series to feature checkpoints, one mid-level and another once you’ve reached the end level boss. It isn’t as much of a blessing as it sounds however. You lose all weapons upon death and starting off from mid-level where things really become hectic like Gradius often leaves you in an impossible situation. I wasn’t expecting it to be this hard but it is doable, you just won’t be finishing the game in one afternoon.

Super Nova tends to get lost in the conversation whenever SNES shooters are spoken of. While it doesn’t reach the lofty heights of say Axelay or Space Megaforce it is certainly one of the better games in the genre for the system and in my opinion one of the best in the series.