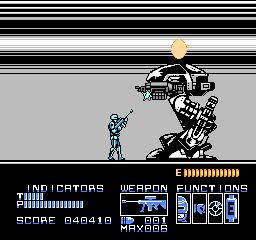 For those of you too young to remember Robocop he was sort of the Master Chief of the 80s to young kids everywhere.  He was a cool cyborg cop who dispatched criminals with extreme prejudice when necessary.  Sure you might look at him now and think his design is quaint but in 1987 this shit seemed high tech.  Hell, Detroit seemed like the worst place on Earth due to that movie in my child like eyes and then, you know, I realized it was actually true.  But I digress.  For such a brutal action movie (seriously go back and watch it, I can’t believe I was allowed to see it when I was 8) a video game adaptation was inevitable and Data East was ready and willing to take our dough.  But does it live up to our expectations?

The original bad ass in all his glory.

Released in 1988 the game roughly follows the plot of the movie.  After being murdered by Clarence Boddiker (Red Foreman you evil bastard!), Alex Murphy is reborn as Robocop, the latest attempt to clean up the streets of Detroit.  The plot follows Robocop as he tracks down the corrupt head of mega corporation OCP and Clarence Boddiker for a little revenge.  You would think this would be the perfect formula for a no frills action extravaganza and while it has its fair share overall it isn’t very compelling.

That isn’t for a lack of trying however.  Robocop was programmed with strict directives in the movie and the game attempt to mimic that.  Robocop is not allowed to use firearms in public spaces, leaving you to rely on your armored fists for odd stretches in most levels.  These instances are usually preambles to large masses of goons coming for a piece of your hide so when you can finally bust a cap in their asses again it’s liberating.

Robocop’s advanced systems are also featured, with 4 in particular: advanced vision will alert you to weak walls, the fist denotes residential blocks where your gun is a no go, the enemy detector which honestly is useless, you can see them in front of you, and a low energy alarm.  Your energy meter functions as a timer of sorts; if you lose all of your life points or your energy runs out its game over.

They stayed true to the character and it definitely separates the game from the ranks of lame Contra rip-offs.  But in some ways it hurts the game as well.  Due to his inability to jump the level designs are straightforward for the most part.  There are doors to explore here and there but it’s just fluff in most cases.  He’s not the most nimble protagonist either, so the game moves at a very plodding pace.  Look I’m not saying Robocop should be flipping like the Ninja Turtles or Bill and Lance (as ridiculous as it would look it would still be hilarious) but Jesus Christ he could move a little faster.  Your weapon selection is extremely limited, further removing any real reason to explore your limited surroundings.  The extra functions are underutilized and could have gone a long way towards sprucing up the action.

But in terms of making good use of the license it succeeds on that front.  In addition the previously mentioned gameplay features you’ll recognize some of the locations in the game from the movie and the boss battles are similarly intense.  The ED-209 is just as menacing as his silver screen counterpart and putting a bullet in Boddiker is satisfying.  See I don’t necessarily think Robocop is a bad game, just that its gameplay could have been handled better.

I’m of two minds when it comes to Robocop.  You’ll either like it for staying true to his character or hate it for being so rigid in its structure.   I certainly wouldn’t recommend this over Contra or Shatterhand but when you’re done with those you might want to give Robocop a glance.