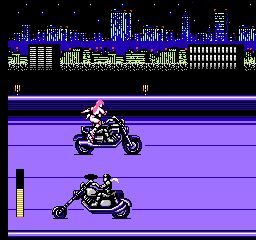 For the longest time I ignored Rollergames. In my mind I associated it with that corny TV show from 1989 that my mom probably watched and assumed that the game would be more of the same tripe. Well to a certain extent it is. But! Leave it to Konami to take such a simple premise and make a pretty decent platformer out of it. Unlike the arcade game (which they also produced) that was true to the show Rollergames is a brawler/platformer but it doesn’t do either exceptionally well. The execution of its constituent parts is not good enough to make the game enjoyable over the long haul.

Rollergames is based on the TV show from 1989 which saw 6 teams of three competitors battle it out inside a figure 8 track. There was definitely some wrestling style face/heel action going on as the teams were split into the Western Alliance and the Eastern Empire with ongoing story lines played out over the season. That carries over to the game as the Eastern Empire (consisting of the Maniacs, Violators, and Bad Attitude, you know these are the bad guys) kidnap the Rollergames commissioner and for some god forsaken reason only the “good teams’ can save him. Not the cops, dudes on roller skates.

The three selectable teams have their differences but honestly they aren’t as pronounced during gameplay. With three teams you just know they’re going to hit all of the clichés. The T-Birds put you behind a big, slow, and powerful truck of a man, able to knock out most enemies with two combos. The Rockers don’t seem to occupy any one niche and is just…there. Hot Flash puts you in the skates of a leggy model who is equal parts fast and powerful and is my go to. Aside from their physical characteristics they each have a special move that is really hard to pull off consistently, to the point where I didn’t even bother. You aren’t locked in to any one choice as each level lets you switch it up, not that it was necessary.

Calling this a brawler is a bit disingenuous. The majority of enemies you’ll encounter, from the rollerblading Guile lookalikes to bats and hawks will go down in one hit. The end of each section will usually throw 5 or six bad guys in pairs that take a little more time to go down. These are usually followed up with a boss battle of some kind and are the only parts of the game where you’ll really notice the differences between characters.

With less combat a large part of the focus is on platforming and that’s where the problems begin. Because you are gliding around on skates momentum plays a part in how far you move. The physics governing your speed and such are less than ideal however and with the viewpoint comes many frustrating deaths. Games like Konami’s own Ninja Turtles brawlers use the same viewpoint but wisely shy away from the type of precision platforming present here. In some ways it’s similar to Double Dragon with the added element of imprecise movement due to the skates on your feet. There’s some strong level design present that is vintage Konami but unfortunately you’ll have to deal with some jank to see it all.

It really shouldn’t come as any surprise then that Rollergames is incredibly difficult and not always for the right reasons. The game leans heavily on memorization like Battletoads and fortunately it isn’t as punishing as that title but it does come close. The forced scrolling levels are especially guilty of this as you’ll only have a second or two to either jump or move to the appropriate location or die. What should have been a welcome challenge of pace comes across as really cheap as a result.

Outside of that probably the main issue is the clock: because the clock ticks pretty fast it urges you to always stay on the move which unfortunately leads to many mistakes and cheap deaths. You can’t rush any of the platforming sections; at least not until you’ve learned the layouts which will take some time. The physics aren’t perfect and combined with the viewpoint and wonky momentum prepared to die a lot. These issues are pretty severe but not game breaking in my opinion. It’s just that these are the types of problems that really stick out when the rest of the game is so damn good.

Rollergames surprised me. I went into it not expecting much beyond a cheesy licensed cash-in and found a cool brawler instead. With just a few small tweaks this could have been really great instead of frustrating and I applaud Konami for trying something different but that still doesn’t mean it will be to everyone’s liking.