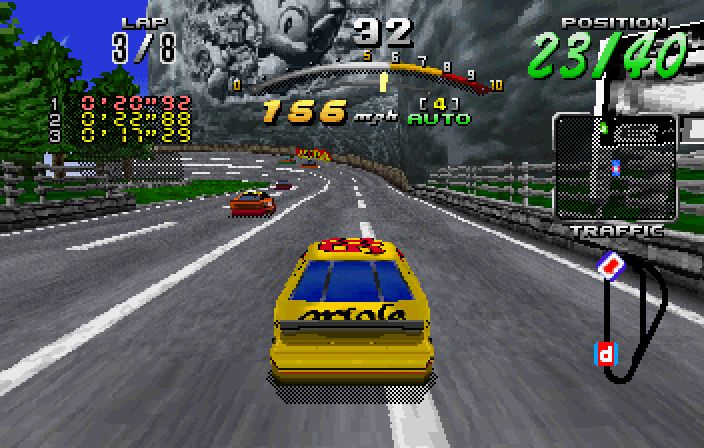 The anticipation for the Saturn port of Daytona USA was only matched by the disappointment of its technical shortcomings. For those that stuck with it the gameplay was more or less accurate but it’s kind of hard to appreciate when the game is damn near building the track right in front of your face. The message reached Sega loud and clear and so Daytona USA: Championship Circuit Edition was created as an apology in the same way that Virtua Fighter Remix made an already good game better. However unlike that title CCE doesn’t complete address the original’s flaws. Whether you can overlook that comes down to personal preference.

Forget about all of the other additions for a second, the primary reason for this version of the game to exist was to fix the first game’s technical flaws. On that front there is some good and some bad. The frame rate has been raised to a more consistent 30 which is amazing all things considered. Daytona pits you up against 19-39 other competitors and for the fps to still be that high is a miracle. Considering the vast majority of racing games from that era only bothered to fill their tracks with 5-8 rivals it makes the work Sega did here even more impressive.

It does come with a cost however. The ridiculous clipping and draw-in returns and is just as bad and in some cases even worse than before. I’m not exaggerating when I say large chunks of geometry will magically appear within seconds and the effect is jarring. Sega’s AM3 division did the majority of the grunt work on this and it’s disappointing they did not apply some of the technique’s they employed with Sega Rally (smart placement of background objects and such) to reduce or hide it.

The wealth of additional options and content make up for it in my opinion. The additional handling options really open the game up to novices as the arcade’s controls took a bit of an adjustment. Now you have the option of Slow, normal, and quick steering. The quick option lets you drift a little more, not to the extent of a Ridge Racer but less rigid. The braking is still a damn mystery to me but it could just be that I’m not very good at the game. Four new cars bring the roster up to a total 9 with some obviously performing better on certain tracks. Curiously the original Daytona car is not part of the starting lineup but once you unlock it you’ll why, its game breaking. The last piece that was missing from the original was multiplayer and that has been added in the form of two-player splitscreen Mario Kart style. The frame rate takes a hit which is to be expected but it is still playable although less than ideal.

The main attraction is of course the courses of which there are five. The previous three return but are slightly remixed enough that they seem familiar but also have new routes. The two new courses however are amazing. National Park Speedway takes place alongside an amusement park complete with Ferris wheels, a moving roller coaster and seaside buildings. Desert City is a narrow pass that features some of the most daunting turns in the game. It also has some nice scenery such as hot air balloons and a train running throughout the course.

As an extra kick in the nuts the Japanese version of the game was significantly improved over what we received the US and UK. The clipping was reduced significantly alongside new background textures. The option to race at different times of day is present which, while minor, does add to the atmosphere. Especially nighttime driving, it is awesome! For those that missed the fruity vocal tracks from B-UNIV they are present along with the remixes for a full audio package that gives you a choice no matter your preference. Not that many actually bought it but this version of the game also had Netlink support for online play. It should be noted that the Netlink edition of the game released in 1997 had all of these extras but it is also possibly the rarest Saturn game in the US.

While a slight misstep (at least in the US) to create the definitive home version of Daytona for its time the CCE version of the game is still a significant improvement over the original. With the better handling the game plays a lot better, enough that I imagine some will be able to overlook its technical flaws, especially if it’s the Japanese version.