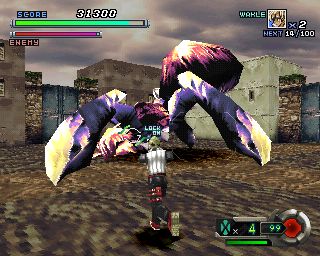 I wonder why Gungage was released only in Europe and Japan. There was definitely a shortage of arcade style action games and it wasn’t as if the two Contra games were filling that void. Games like One and Apocalypse were good but flawed, a trait that Gungage also shares. While this is not most accomplished game within the genre there were certainly far worse games shitting up store shelves that would have made this C-tier release stand out. If you can put up with its warts the game is an enjoyable if short romp.

Initially you control Wakle Skade, the stereotypical well rounder. Wakle is a bit nimble and comes equipped with a shield and paralyzing shot which freezes enemies in place. Once you meet certain criteria you can unlock a further three characters, each with their own special items, moves, and story path. I can tell you right now that Steyr seemed to be the creator’s favorite as she has four special moves compared to everyone else’s one or two. Her playstyle is faster paced as she can dash and duck in addition to sidestepping and strafing. Plus she has three weapons although they are weak. Kard is the strong but slow man of the group although that is a plus in my opinion as you can plow through the game with ease. Dee is harder to classify as his physical attributes aren’t anything special but his weapons are awesome.

Gungage uses tank controls which are my kryptonite. However in this particular instance they are at least functional although less than ideal. Unlike most games that employ this ridiculous control scheme you are adventuring in wide open areas rather than tight corridors. This isn’t the fastest action game on the planet so quick movements and such are rarely called upon. And even in that instance there are a number of additions that make up for it. You can strafe with the L1 and R1 buttons and in combination with the D-pad can keep your current target in view a good portion of the time. A double tap will execute a side step and you can center the camera and sort of lock-on although it is rather poor.

All of these amenities are nice but they can’t cover up all of the flaws with this setup. Character movement is incredibly stiff leaving maneuvering in a narrow space frustrating much like the Resident Evil games. Trying to line up your jumps to leap on platforms is far more frustrating than it should be although to the game’s credit it is rarely called upon. Turning is incredibly slow which is the biggest detriment; boss battles are usually against much faster opponents who will literally run circles around you; combined with the spastic camera this will lead to many cheap hits and deaths. This was released too early to adapt the lock-on method both Ocarina of Time and Mega Man Legends employed which sucks as the game would really have benefited from it like nearly all action games since.

The nine missions cover a lot of ground although there is very little plot connecting the locations you’ll visit. While the levels can sometimes be large they are mostly a series of small arenas mashed together. It keeps up the frame rate and tends to keep the action focused although camera issues do crop up. The few enemies you’ll face tend to appear right in front of you or conveniently are hiding out of sight which makes the slow turn speed a real hassle. Generally speaking I like the mission variety overall with only one (the Desert) being a conceptual nightmare. While the earlier missions are short and bereft of interesting enemies the late game picks up considerably although it’s over a bit too fast depending on your choice of character.

Since this is more or less an arcade style action game on a console it comes as no surprise that it is a bit short. There are nine missions total and those with a modicum of skill should be able to complete the game in a little over an hour. True, you can unlock a further three characters who each play differently but at the end of the day you are still going through the same levels in a different order with a few alternate paths. If the mission available were longer or if the additional characters had exclusive levels it would have greatly extended the life of the game.

As a 1999 release Gungage competed against games like Konami’s own Metal Gear Solid, Final Fantasy VIII, and Soul Reaver visually and in that regard it comes up short. The boxy environments suffer from low resolution textures, warping textures, and really bad draw distance. The art direction carries the game somewhat but in terms of the enemy designs but it is ultimately let down by this shoddy engine.

The one saving grace of the presentation would be the music. The soundtrack is absolutely fantastic and honestly sounds completely out of place here. Castlevania series composer Michiru Yamane contributed to the score and the orchestral sound incorporates a ton of rock, jazz, and techno that accentuates the atmosphere. Because of the composers involved the music wouldn’t seem out of place in a Castlevania title however it does fit here, even if the style is unusual for an action game of this type.

Gungage is far from the greatest run and gun action game for the PlayStation but still would have helped to fill an underserved genre had it been released in the US. Despite my misgivings with the controls I still enjoyed it and have no problem recommending it, especially since it is usually dirt cheap.