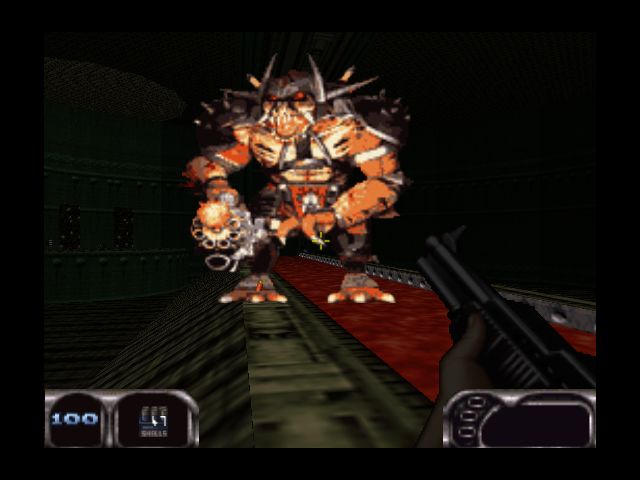 I would not own my own computer until 1999 so I could only look on with envy at the PC gaming renaissance of the mid-90s. While I would occasionally get the chance to dabble with Doom and Hexen I only got to experience the majority of the really popular titles that made PC gaming unique through console ports. Duke Nukem 3d came on the heels of a really great Saturn conversion done by Lobotomy Software and my excitement was high. This was a game I had read so much about and looked forward to but unfortunately the N64 game, while great technically, is a neutered version of a classic.

It isn’t a stretch to say there was some amount of anticipation for Duke Nukem 64. Midway’s version of Doom was fantastic and Turok (for its time) was pretty groundbreaking with Goldeneye showing that first-person shooters can work on consoles. The PlayStation and especially the Saturn renditions of the game were both excellent and one would assume the 64 version would be better. But thanks to some unwarranted censorship and a few strange omissions the game has turned out less great than it could have been.

Although Duke Nukem bears a slight resemblance to Doom it is actually a far more advanced game in subtle ways. The Build engine allows for more complex level design, namely a highly interactive world with more moving parts that entice you to click on everything in the environment. Pool tables, soda machines, toilets, fire hydrants, chances are if you see it you can interact with it in some way. The game’s realistic setting facilitates this as you venture from the streets of LA to an alien space station orbiting the planet.

At first glance this may seem like a typical FPS but the gameplay is far more involved than simply killing every bad guy on the way to the exit and collecting keys. There are some (admittedly) simple puzzles to solve as well as a number of secondary items such as scuba gear and a jet pack that break up the monotony of killing the repetitive rogues gallery of enemies. These elements were less impressive by the time the game came out in light of Goldeneye’s release but were still pretty welcome. The game’s sense of humor in the form of numerous nods or parodies of other popular games and Duke’s witty comments also gave it a unique identity within the genre.

Sadly however the game’s more risqué elements were either completely removed or outright censored. The strip clubs, adult video stores, the strippers, and even chapels have all been removed in order to create a more family friendly fps. Not that I particularly gave a damn about those elements but they were a large part of what made Duke Nukem 3d stand out so the fact that they were unwilling to allow the developers to go for a higher rating and keep it intact Is disappointing. It’s also a bit disconcerting that naked strippers and hookers are a big no no but seeing them skewered through the spine is alright.

The game’s 33 levels are played sequentially rather than being split into distinct episodes you can choose from freely. It’s disappointing but also means you are getting your money’s worth as this is one of the lengthier games in the genre. The levels are all taken from the original game and the Plutonium Pack expansion with a few original creations thrown in. Add in two-player coop and a fun but limited 4-player deathmatch and you have a pretty feature complete package.

This was an exceptionally good looking version of the PC original and bested even that game in a few ways. Thanks to the fact that Duke takes place in mainly indoor locations the dreaded N64 fog isn’t needed to keep the framerate high. The game moves at a blazing clip that rarely dips. The filtering effects of the N64 has reduced pixilation in the environments and enemies which gives it a clean look from afar but the low resolution textures are ugly when viewed in close. Many of the explosions and lighting effects have been given a polygonal makeover for that extra visual kick. Aside from the censorship they did a really good job cramming all of the visual detail into such a small cartridge.

The strangest omission though has to be the complete absence of any music. The soundtrack was most likely sacrificed to fit into a smaller cartridge and unfortunately it is very noticeable. This doesn’t come across atmospheric but very Spartan in its absence as the only sounds you’ll hear are monster grunts and gunfire. The extensive one liners have also been dramatically cut down to the point where you’ll rarely hear Duke say anything. Jon St. John brought that character to life so it’s disheartening that one of the game’s most defining traits is all but gone.

Although the censorship issues stifle the game somewhat at the end of the day Duke Nukem is more than just a vehicle for cheesy one liners and titillation. The great level design is still present which made this one of the better single player campaigns of that era. While it isn’t as great as Quake or Goldeneye Duke Nukem 64 is still a more than decent version of a classic game.