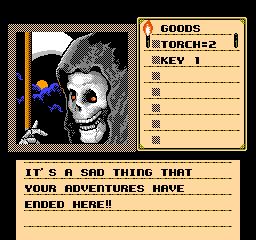 I’ve always loved point and click adventure games, dating as far back as some random Apple II game I played in an elementary school computer lab I’ve long since forgotten.  Despite my fondness for the genre I missed out on its golden age due to a lack of a computer; back then they cost about $2-3000.  And you thought the Neo Geo was expensive.  I had to make due with console ports such as the later Rise of the Dragon for Sega CD, Maniac Mansion, and this classic, Shadowgate.  Kemco and their partners produced a trifecta of adventure game ports from the Macintosh that all turned out excellent with Shadowgate probably being my favorite.

As a lone unnamed warrior you are teleported to the Castle Shadowgate by the Wizard Lakmir and tasked with preventing the resurrection of the Behemoth, a titan of old.  As these things typically go you are the last in a line descended from kings so only you can fulfill this task but I say they could have at least given you a little assistance.

Deep, dark, foreboding and full of mystery Shadowgate is one of the darkest NES titles released in the US.  While Nintendo of America were at their most aggressive in terms of censorship during that era there are plenty of little details that managed to slip past the knife.  Most of it is detailed explanations of how you’ve just died a gruesome death and I imagine that because it’s usually only text it was okay but that doesn’t stop the imagination from running wild.

Usually console point and clicks are an exercise in frustration but they’ve done a good job here simplifying the menu commands somewhat to make things faster.  You can pick up and examine nearly everything in the environment and in short order will have a massive list of items with no idea what to use them on but that’s part of the fun of the game.  The castle itself isn’t very large however you’ll frequently revisit old rooms once you’ve acquired new items in order to delve deeper into its depths.

The puzzles in the game are intricately linked, requiring some obscure combination of items in order to unlock doors or fell the occasional enemy to move on.  Even the most obscure pattern in the background might be an important item or clue needed later in the game.  The amount of items in the game is deceptively large; truth be told you’ll probably only use about 40% of the junk you’ll pick up but you can never tell what will be vital.  Graphic adventures are known for being tough but Shadowgate is particularly obtuse to the point that it is maddening.  It wasn’t until years later that I finally completed the game and I seriously doubt anyone who wasn’t a teenager or adult back in the day was able to figure out the obscure hints given.

Unlike most titles in this genre you can die and death visits frequently.  Make no mistake, Shadowgate is hard, with death lurking around every corner.  Many of these deaths are purely accidental and hilarious in retrospect but are so frequent that you’ll need to save in every room just in case.  Hell even standing still to think and ruminate on what this weird ass device you’re looking at actually does can be fatal; if your torch runs out Its an immediate game over.  Technically that means there is a time limit to complete the game but there are enough torches to steal that you would have to be really stupid to burn through all of them.  That being said Protip: steal every torch you see.

With all that in mind why would anyone stick around?   Because the game’s atmosphere is absolutely awesome.  The haunting soundtrack creates a pervasive feeling of dread that follows you around like a miasma from room to room.  When the music shifts, whether that be from impending danger or because your torch is about to fan out it’s actually scary.  The castle has many varied rooms despite its modest interior and while the puzzles will make you want to punch a wall in frustration there is a real sense of accomplishment once you’ve figured them out.

If you can accept that you’ll be using a lot of trial and error Shadowgate is an excellent port of a classic game that is still playable today.  It’s strange that the NES was host to quite a few adventure games that were all generally awesome and Shadowgate might be the best of the lot.