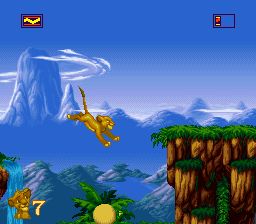 Once upon a time Virgin Interactive were one of the hottest development studios in the industry.  With the likes of Dave Perry, Tommy Tallarico, and Doug Tenapel on their roster they turned out some pretty awesome games, especially with the Disney license.  After Capcom and Sega Virgin would continue the quality streak set forth by those two titans using their Digicel process.  The Lion King was one of the biggest movies of 1994 and so the red carpet was rolled out for its video game debut, turning out one of the best platformers of the year, even if it’s a little too hard for its intended audience.

The game follows the plot of the movie, chronicling Simba’s journey from a young cub to an adult and future king.  There are no cut scenes but most of the film’s most important events are touched on in-game, though they wisely shied away from some of the film’s more “adult” themes.  The dichotomy between young Simba and his adult form’s abilities is used to great effect to provide gameplay variety as the game’s focus changes almost completely.  That variety extends to the rest of the game’s 10 levels forming a 10 level adventure that is rarely boring.

Young Simba is fairly weak and cannot face enemies head on.  As such most of his moves are used to set them up to take them out unhindered.  Since his claws are too small to inflict real damage he can only pounce on enemy heads.  His roar is also only strong enough to frighten smaller creatures like insects for a few seconds.  The roll is useful for bowling over tougher enemies like porcupines and beetles who have immune to your pounce when upright.  It also doubles as a nice speed boost in pinch.

For the first half of the game the events are more whimsical in tone as Simba stumbles from one level to the next in what almost feels like a slice of life tale rather than what will eventually become a story of revenge.  The levels are heavily focused on platforming with pinpoint accurate jumps more at home in a Mario game than a Disney adventure.  Many of the animals you’ll come across will actually help propel you from one location to the next such as monkeys, hippos, and even ostriches.

But the good times don’t last forever.  There’s a gradual shift in tone that is handled excellently as you progress.  The bright tones of the Pridelands and Can’t Wait to Be King are a far cry from the Elephant Graveyard with its decaying skulls and wild hyenas lurking about, a clear sign of what’s to come.  The stampede is fairly menacing as Simba tries to avoid being squashed by rampaging wildebeests in a pretty thrilling second person chase sequence that is a nice change of pace.  The game gives you one last glance at happier times in Hakuna Matata before the dark times ahead.

As an adult Simba is a force to be reckoned with.  As the literal T-Rex of the jungle you can slap the shit out of anything in your path with your claws and your roar will terrify just about everything.  You can no longer roll but if timed correctly you can throw enemies around.  The pace of the game shifts accordingly with far more combat involved now that you are better equipped to handle it.  There’s less platforming now but in comparison these levels are more maze like in their construction.

Overall the game is excellent but there are minor issues that add up and bring the game down a notch.  The challenge is high; far greater than I expected leading me to wonder who the intended audience is.  The hit detection isn’t perfect which becomes frustrating in the late portions of the game where hyenas and other animals attack frequently.  The timing of your jumps leaves little margin for error as young Simba and I honestly question if younger gamers would have the dexterity to manage some of the more intense levels like Hakuna Matata.  That waterfall segment towards the end and the gorilla boss battle almost made me punch a wall and I’m an something of an expert.  The maze of Simba’s return is confusing, as it should be, but gives no hints as to whether you’re on the right track or not.  Even as early as the second level the game pulls no punches; there are a series of jumps off the back of an ostrich that (anyone who has played the game will know exactly what I’m referring to) are infuriating.

There are some gameplay differences between the SNES and Genesis game that slightly favor the Sega version.  As a whole its better balanced; certain enemies are less aggressive and the timing of your hits on enemies (especially bosses) is more forgiving.  It isn’t so pronounced that it makes that much of a difference however; the factors that make the game challenging still exist in both games.

The Lion King featured some of the best animation during the 16-bit era and used the same process employed in creating Sega’s Aladdin except taken even further.  Simba and his antagonists animate with a grace rarely seen to that point and the backgrounds recreate scenes from the movie exceptionally well.  The perspective used during the Stampede was also a first in that period; Mickey Mania was the only other game to use it to my recollection.  Not only is it still an amazing technical feat to watch but It also drove home the danger of the situation quite effectively.

Once again both versions of the game have their differences in presentation but it’s quite evident that the SNES version is superior.  The Genesis game is darker in tone which works beautifully later in the game.  However the early stages of the game have noticeably less colors and dithering in the backgrounds.  It does feature a few more layers of scrolling in its backdrops at times.  The SNES version is more colorful throughout with no dithering creating smooth, exquisite scenery.  The sprites are also slightly larger.  In terms of music there’s no comparison.  The SNES game recreates the movie’s soundtrack excellently and features more instruments and background vocals missing from its counterpart.

The Lion King stands as one of the better Disney games during the 16-bit age and had the potential to be the best if not for its off kilter balance.  For the younger set it may be too hard and older gamers will find it frustrating but persevere and you’ll be rewarded with a long and involving quest.