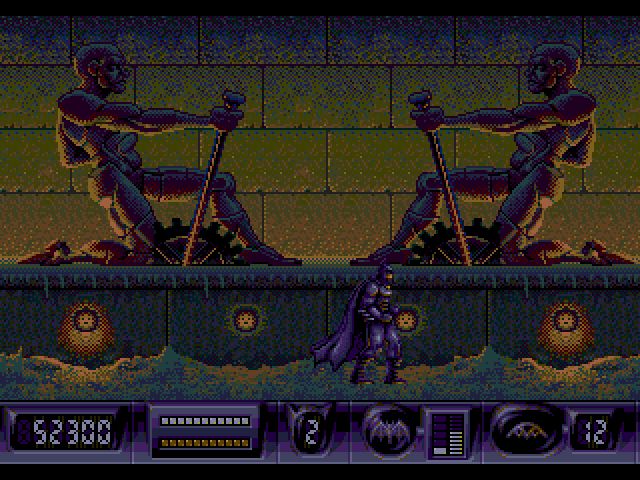 I freely admit to getting caught up in the hype leading to Batman Returns release in theaters.  For anyone that grew up reading comic books 1989’s Batman may as well have been the second coming of Christ.  It took certain liberties here and there but those were forgiven as we just wanted to see the Dark Knight on the big screen.  Batman Returns promised to be bigger and better and was certainly bigger.  But better?  That’s debatable.  The film has some glaring flaws which extends to this Sega Genesis tie in.  With a little more fine tuning the game could have been good but is far too cheap to be enjoyable for long.

The game follows the plot of the movie for the most part with the Penguin’s terrorizing Gotham after a failed bid at becoming its mayor with Catwoman inexplicably thrown into the mix.  The game picks up close to halfway into the movie’s events oddly enough with the short intro recapping all you need to know.  Or maybe it’s not so odd.  For a movie called Batman Returns he sure takes his sweet ass time showing up; it’s nearly 40 minutes into the film before you ever see the damn guy.

As a side-scroller Batman is armed with a few melee moves and I’ll tell you right now that the hand to hand combat sucks.  Luckily there are a variety of sub weapons in his utility belt that you can use instead for the most part.  Batarangs come in standard and heat seeking varieties, smoke bombs can stun enemies, and you can unleash a powerful flurry of bats.  Ammo for these is limited but refills are in ready supply almost as if they knew most would rely on them rather than standard fisticuffs.

At 5 Acts with multiple sub levels each this is a pretty long adventure that uses many of the film’s locations as set pieces.  Most levels are pretty wide open and allow you to choose your own route to the end while making ample use of the grappling hook.  It’s a nice idea in theory but in practice the level design is flat out confusing with little direction.  It isn’t always obvious which background elements you can swing from or even stand on.  Many of the game’s pitfalls and such are obscured by the numerous foreground objects leading to many a cheap death.

If those don’t get you then the many leaps of faith needed to find the proper path will.  There’s a heavy emphasis placed on using the grappling hook to navigate the levels and its one of the most finicky mechanics I’ve ever had to deal with.  You can never reliably get it to work in a pinch but thankfully it’s use is mostly relegated to finding power-ups.

Batman moves with the grace of an elephant which is problematic as nearly every generic enemy is an Olympic athlete by comparison, able to dart around the screen at a pace you can only dream of.  Trying to deal with most foes with punches and kicks is futile as your reach is too short.  The bat wielding clowns of Act 2 are a prime example of this; they will always nail you and run away unless you use some projectile.  The game is riddled with these kinds of cheap hits as clowns rain down from the sky or from off screen.  The motorcycle riding thugs at the beginning of Act 2 are the epitome of this; they move too fast for you to react and the few that you could possibly dodge will actually shoot you immediately.  With the scarcity of health packs chances are you’ll die at least once or twice on each level before clearing it which isn’t necessarily a bad thing; having to repeat certain tasks before completion is one of the most enjoyable aspects of gaming.  But when it’s due to unnecessarily fair elements like the ones present here that it crosses the line.

While the game’s flaws are frustrating when all of its constituent elements come together it does work.  There are some cool moments during the length of the game such as winding your way down a crumbling tenement building or some of the game’s boss battles.  Admittedly you’ll fight Catwoman and the Penguin a few too many times for my liking but at least these encounters are memorable.  Learning their patterns and taking them out without a scratch is actually pretty fun.  There are only a few that are outright terrible such as the battle against the Circus strongman so at least they are few in number.

Graphically there are elements that I like but the game does leave me with mixed feelings.  The game’s dark color palette captures the atmosphere of the movie pretty well and the sprites are decently animated.  There grainy look of the environments does get tiring as does the purple saturation of the entire game.  There’s a slap dash look to most of the stages with many random elements seemingly thrown together that makes navigation difficult.  At its best moments it is impressive, at its worst its confusing.

There’s a lot to like here buried under shoddy execution.  Had Sega spent more time play testing the game and ironing out its flaws this could have been an excellent title.  As is it reeks of a missed opportunity.