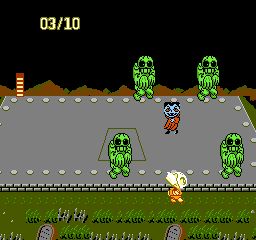 Namco’s Splatterhouse was a significant arcade release for a few reasons.  The protagonist with his vaguely Friday the 13thesque mask was an imposing figure and the gobs of gore spilled left and right was definitely unheard of at the time.  But forget about the violence, it was an arcade beat em up that didn’t focus on bashing street thugs or mutants.  It doesn’t sound particularly exciting now but back then?  It was a god damn revelation.

While most are familiar with its Turbo Grafx port or Genesis sequels the first actual home game in the series was a Famicom exclusive.  Obviously a straight port would never have worked (and considering Nintendo’s strictness would never have been approved) so Namco instead took a page out of Konami’s handbook and created a parody of it.  Splatterhouse Wanpaku Graffiti took the gory arcade game and instead turned it into a parody of Hollywood cinema and it actually works.  Not only is Wanpaku Graffiti pretty damn hilarious it actually might be the best game in the series from a gameplay standpoint.

Rick is dead, with Jennifer in mourning beside his grave.  Suddenly a lightning bolt strikes the grave and brings Rick back to life.  Curiously he was buried with the mask on but that detail is glossed over.  Jennifer’s elation is cut short when a second bolt of lightning reanimates the Pumpkin King who takes her away and sets Rick on his quest.

Forget about fisticuffs as Rick is always equipped with a meat cleaver, a strange choice considering the wacky nature of the proceedings.  While the variety of melee attacks is missed let’s be honest, up until the series third installment they were largely ineffective.  The game has been balanced around this as most enemies will explode in a shower of goo in one hit.  The number of weapons has also been stripped down to just the shotgun, which doesn’t make an appearance until the second half of the game.

What evens the odds in your favor is the level up system.  There’s a counter that keeps track of the enemies killed and at set intervals your life bar will increase in size.  It makes killing enemies completely worthwhile, to the point that you should probably spend some time cheesing the system, especially in the first boss encounter.  There probably is a limit to how much the life bar can grow however right until the end of the game there were still new plateaus to hit.

It’s a far cry from the relative stinginess of the arcade game and makes the game much more balanced.  Health power-ups are also far more abundant, with hamburgers and sodas dropped by enemies and also hiding in the environments.  To a degree it does make the game a lot easier but I’ll gladly take this over the artificial constraints the series would eventually adopt.

Each level is a thinly veiled parody of a Hollywood movie with many references blatantly on display.  The first boss you face doesn’t even engage you directly; he first performs a dance ensemble right out of Thriller before sending his zombie hordes after you.  There’s even a girl who has an alien bursting out of her chest, an obvious reference.  In a self-referential nod there are two levels based on Friday the 13th, which shouldn’t be a surprise considering how closely Rick resembles Jason Voorhees.  The parodies aren’t reserved for only popular films as even obscure films like Evil Dead are a target.

While the game is funny it definitely doesn’t lean on the comedy to save it.  This is more of a platformer than a beat em up as evidenced by Rick’s permanent possession of an axe.  It’s definitely a weird shift but welcome as the first two games became repetitive in short order.  There are very few bottomless pits to worry about as most will simply take you to an alternate path.  Speaking of which nearly every level has multiple routes with some far easier than others.

The seven levels take you to a variety of locales from the traditional Splatterhouse graveyards and haunted houses to Diamond Lake, and for some god forsaken reason it all ends in an Egyptian pyramid.  Well there IS a reason but I won’t spoil it.  Suffice it to say that it all makes sense within the context of the game.  Due to the leveling system the game is a bit easy and with passwords most will complete it in one or two sittings.  But I guarantee you’ll have an awesome time while it lasts.

Though presented in the super deformed format Wanpaku Graffiti is a powerhouse in terms of graphics.  Most levels feature one or two layers of scrolling which was practically unheard of at the time of the game’s release.  The sprites are extremely large and detailed with suitable animation to match.  Despite its cute exterior there’s still a decent amount of gore in the game; this is still called Splatterhouse of course.

Splatterhouse Wanpaku Graffiti is one of the best Famicom games of all time and one well worth tracking down.  Even if you aren’t a fan of parodies there’s enough good gameplay here to keep you interested.