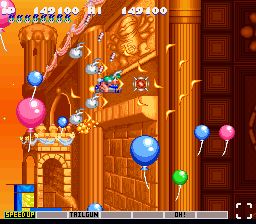 By 1994 the American arcade was dominated by countless fighting games, light gun shooters and some truly awesome 3d racing games.  This left the once popular shooter clearly on the outs, which sucked as that was about the point when some of the most unique games in the genre would hit the market.  Fans were left hoping for home ports as these games stayed in Japan, with Gokujo Parodius being one of them.  Take everything that made Parodius: Non-Sense Fantasy great and add 2-player coop (at least in the arcade) and you have this excellent port that America would be denied.

While it never saw an official arcade release in the US Gokujō Parodius! Was released on console in Europe under the name Fantastic Journey.  Well that’s one way to put it.  I don’t know how or why the name was changed to that as the official title loosely translates to Fantastic Parodius – Pursue the Glory of the Past but the fact that once again Europe got a cool exclusive over America still remains.  The Parodius games are the best Gradius games that never were, and at least on the SNES turned out even better than Gradius III.

Since the last Parodius title the roster has nearly tripled in size with new characters debuting from a few more series.  Actually to a certain extent you could say it’s tripled; in coop player two has access to a further eleven characters that are palette swaps/counterparts to player one.  With an increase in roster comes new weapon options and Konami really went to town in giving everyone some interesting weapon combinations.  While the returning cast members are still using gear from their respective series the newcomers draw from some really obscure Konami arcade games such as Thunder Cross and Xexex.  You’ve to respect that respects their lineage while at the same time lampooning it.

Gameplay is near identical to Non-Sense Fantasy although you do have a few more options like turning off the annoying weapon roulette.  The focus instead is on the zany hijinks at every turn and in this respect the game is literally insane.  The first level sets the tone as it takes place inside one of those crane machines that ate your money rather than doled out prizes.  Stage two is one long battle against a cat faced submarine; it’s an R-Type style assault against one huge battleship except this one makes cute noises and adorable faces.  The Speed up level takes its theme to heart as it takes place on a rural street with signs and hazard warnings all over the place.  Silly, but when you think about it it makes sense.

Other levels are cartoony takes on popular Gradius staples but the biggest source of the game’s weirdness comes from its bosses.  How do you fancy a battle against a panda ballerina, complete with tutu?  Or a mermaid with a pirate ship on her head?  The big core from Gradius makes an appearance but not in the way you expect.  Possibly my favorite boss is the capsule monster of stage five.  Shaped like an overgrown power-up it feels less like a battle for survival and more like a loot piñata as it shoots tons of power-ups in random patterns.  The only real danger of death comes from the occasional spike ball mixed in and its pathetic attempts to ram you.  If you take too long he simply flies away in disgust; how’s that?

Unlike the other games in the series the difficulty here is a bit more lenient and totally dependent on the character chosen.  The Vic Viper is well rounded and adaptable to any situation.  Hikaru/Akane’s weapons are very powerful, especially their boomerang shot which will rebound off destroyed enemies and take out others.  However their options are static and their shield only protects your face; shots from other directions can easily take you out.  I found I died a lot less to stray bullets than in the other games and that the game doesn’t reach the insane heights of its brethren.  It makes for a much more relaxing experience in that regard.

As a late 1994 release Gojkujou Parodius is a pretty damn good looking game.  In the arcade it ran on proprietary hardware and the SNES does a near perfect replicating its look, only suffering in terms of slowdown and the missing coop.  The levels are teeming with activity with many moving parts in its backgrounds.  There’s a great deal of variety from one level to the next and it overall has a more vibrant look compared to its predecessor.  They do recycle certain enemies and bosses such as the galactic dancer and the American eagle but that can be excused as plenty of other games do the same.

Once again the soundtrack borrows from classical music in the public domain.  The likes of Strauss, Mozart, and Tchaikovsky present and accounted.  The songs themselves are done justice through the SNES sound chip but I like the way that the game isn’t afraid to slow down or speed up the pitch to match the on screen action.  There are just as many original themes as well as clever remixes of music from Gradius to round out the aural package.

The only area that Gokujou Parodius comes up short compared to its predecessor is length: 8 levels versus ten.  But when you are having so much fun it won’t make a difference.  This is a bigger and better game than Non-Sense Fantasy in almost every way and one of the best SNES shooters of all time.  You don’t need to be a fan of parodies or Gradius to enjoy the fine shooting action on display here as it is simply a great game overall.