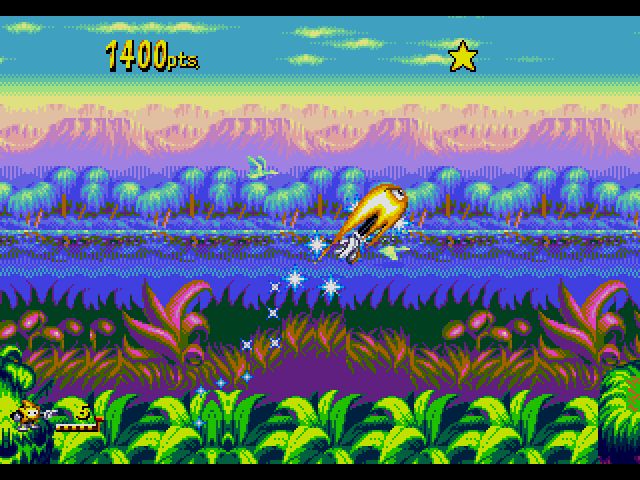 Releasing a new IP or sequel in a long running series towards the end of a console generation is equal parts risk and reward.  On the one hand you have potentially millions of gamers to sell to but also have to worry that said fans aren’t already awaiting a new console.  When it pays off the rewards are great; Grand Theft Auto V and the Last of Us have both done inhuman numbers.  But when it doesn’t great games are overlooked and forgotten by history and such was the case with Ristar.

Released at a point where Sega was already gearing up for the Saturn launch and simultaneously confusing the hell out of consumers with the 32X it received little marketing support and landed with the impact of a wet tissue.  Ristar’s creation is actually pretty interesting; his original design was created before Sonic but as the game’s design changed we wound up with the spiky haired protagonist still delighting children today.  No good idea goes unused however and with a retooling the concept of a character that attacks with his elongated arms was reborn.  Too bad no one played it.

Although he was the precursor to Sonic Ristar plays and controls nothing like him.  Your primary means of offense are your stretchable arms which can extend in eight directions.  Your arms can grab just about everything from enemies to every surface in the game.  Grabbing an enemy will pull them in to deliver a vicious head butt.  Seriously it sends the bastards flying all over the place.  The numerous poles that dot the landscape can be used to swing and build momentum to send Ristar rocketing in whatever direction you choose.

While they tried hard to distance the game from Sonic the Hedgehog there are still plenty of similarities despite Sonic Team’s best efforts.  Each planet follows the same general structure of the original Sonic, with two individual stages on a themed world followed by a boss level.  Unlike that game both levels are rarely ever just variations of each other but wholly separate.  The graphics are far better but still appear to share tile sets from those games.  It even has poles that whisk you away to bonus levels that allow you to gain extra items.  You aren’t collecting rings or any such trinkets and in fact have a life bar which does set it apart.

Luckily the level design is Ristar’s distinguishing factor.  The greatest asset of Ristar is its gameplay variety.  Although you are equipped with a solid set of mechanics each planet is wholly unique and offers up a different set of challenges to contend with.  The first world is a nice introductory planet with plenty of trees and poles to swing on to acclimate you to the game’s controls.  The second planet is filled with water however Ristar is still able to attack while submerged which is convenient as these stages are more combat focused.  In fact you move faster underwater.  Possibly my favorite is the planet Sonata.  This music themed world tasks you with delivering metronomes to four songbirds in order to grant passage.  However the levels are constructed so that there isn’t a straight path and you’ll often have to interact with various parts of the environment to reach your goal.  The levels are massive in size, often with multiple routes to its exit.  To some degree they can be too large and lead you to getting lost but I feel that is a minor complaint.  It offers some incentive for replay value and I’d rather that than a boring single path for every stage

Even the boss battles exhibit the same degree of variety.  Nearly every boss goes through multiple phases with ever changing tactics that make these battles fun and engaging.  It’s definitely a far cry from the simple fare the genre is known for.  The fact that the game manages to keep up this level of variety for the length of the adventure is mind boggling but shouldn’t be surprising.  After all the designers had plenty of years of experience to draw from in this regard.

All in all while I don’t like making the comparison again it still rings true; the game is a bit easy like Sonic.  The strict life bar does mean you aren’t perennially invincible but life restoring stars can be found in chests everywhere and head butting random parts of the environment.  Only the bosses are immune to this kind of tuning as you’ll have no choice but to learn their patterns and execute to survive.  There are a few choking points obviously but nothing too severe; getting to the end of the game is a matter of course, not skill.

As a late 16-bit release Ristar has fantastic presentation worthy to reside up there with the best of the generation.  Through some voodoo magic the game exhibits a level of vivid color that defies the system’s limitations.  But even more impressive than that is the attention to little details.  Diving deeper underwater causes the screen to get darker as you get further away from the sun.  There’s an insane degree of parallax scrolling, up to 7 or 8 levels with some absolutely beautiful backdrops.  The game can’t help but occasionally show traces of its Sonic Team roots but those games have exceptional art direction which was also brought over here.  The music is pretty excellent with appropriately catchy tunes that only suffer from terrible sampled speech.

Ristar is one of the best platformers of its generation, one that that very few have played.  Fortunately it has been rereleased on numerous platforms and can be found dirt cheap.   If you are a fan of platformers you’d be a fool to pass it up.