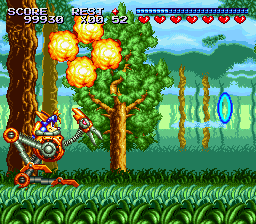 Every successful platform will have tons of awesome titles to choose from with many going on to enjoy massive success.  However not every game gets to enjoy its time in the limelight.  These are the unsung heroes, the games that are just as good if not better than the classics everyone defaults to and help fill out a console library.  And before anyone asks these are not in any specific order, its just the way I wrote them.

Years before Sony would become a major force in the console market they were a third party publisher to Nintendo and Sega.  And they were terrible.  Holy shit, you think Akklaim’s licensed titles were bad, Sony took it to another level with crap like the Last Action Hero, Cliffhanger, and 3 Ninjas Kick Back.  However!  Occasionally they published a gem, of which Skyblazer counts.  As the title character you possess a wide array of magic spells that will help you as chase the evil god Ashura and rescue the princess Ariana.  Skyblazer has the kind of nuanced platforming that made the 16-bit era so great on top of excellent graphics and music.  Unfortunately it received little marketing and was summarily forgotten.  However those that have played it love it, of which I count myself a member.

The Assault Suit series has a long history in Japan but its American presence is non-existent.  In 1992 Konami took a chance and localized Cybernator to the US and while it didn’t set the sales charts on fire the few who played it were extremely lucky.  The game perfectly encapsulates what it would be like to pilot a hulking mech as you guide your suit through the game’s many varied missions.  The level design is excellent with your mission objectives changing rapidly throughout.  While the game is a bit hard (you have to adapt to its pace or else) it is more than worth sticking with for the amazing art direction and sadly truncated plot.

Rocket Knight Adventures was great and so Konami produced two sequels for the SNES and Genesis.  Both are different games however the SNES title is the one that sticks closest to the tenets laid down by the original.  There’s only been one new addition to Sparkster’s arsenal, a short range rolling attack but that’s all that was needed.  The true star of the game is the level design and this is Konami at the best.  Sparkster’s rocket pack is just as fun to use this time around and the new set of levels are quite spacious to allow you to jet around.  There are just as many multi jointed bosses to face and the graphics are spectacular as you would expect.  Honestly I’m clueless as to why this isn’t more popular but I’m here to sing its praises.

Wild Guns harkens back to an earlier time in arcade history when third person action games such as Nam 1975 and Cabal were somewhat common.  With its Wild West meets hard sci fi theme had heavy shooting action if the game were made today it would be a cover based action game like Gears of War.  You get no such amenities here, forcing you to use your lasso to stun enemies and stay active.   There wasn’t anything else like Wild Guns when it was released and hasn’t been since making its unique mechanics that much more special.  With arcade quality graphics and a decently long adventure Wild Guns was a reminder that Natsume used to be a force to be reckoned with in terms of action games.

Next to Skyblazer Hook is the then Sony Imagesoft’s second best published game.  No surprise considering both are from the same developer, Ukiyotei.  It’s simply amazing how deftly they were able to take the flawed movie and turn it into video game gold.  The game makes ample use of Peter’s limited ability to fly through its wide open levels full of secrets and plenty of nuanced platforming action.  Similar in feel to Castlevania 4 it also has the graphics and soundtrack to match that SNES classic.  Since this is the platform it was originally created for the SNES edition is the overall best, easily outpacing its Sega ports in all areas but sound; the Sega CD soundtrack is amazing.

As the last official Turrican game to see release Super Turrican 2 deviates from the rest of the series heavily.  Rather than large open levels full of exploration it is more of a straightforward action game. While slightly disappointing to longtime fans of the series it is truly exceptional at what it does.  Factor 5 were known for pushing whatever hardware they worked on pretty heavily and this is no exception as you are taken from one action movie set piece to the next.  It maintains this pace right up until its closing moments and never stops being amazing, with some of the best graphics the SNES had ever seen.  It’s hard to find now but oh so worth it.

Lufia 2 was a last minute localization by Natsume at a time when new SNES games were rare and US gamers reaped the rewards of their efforts.  Lufia 2 fully fleshes out the prologue of the original game and reveals the history behind the conflict between mankind and the Sinistrals.  While the story and how it plays out is nice what truly makes the game special is its gameplay.  The game strikes the perfect balance between turn based combat and puzzle solving by making enemies visible inside its numerous dungeons and castles.  This way you can focus on the at times head scratching puzzles and even use them in your solutions.  There were many legendary RPGS brought to America in those years and Lufia 2 is easily one of the greatest.

Strider was never ported to the SNES oddly enough however Nintendo fans received the next thing in Run Saber.  As a genetically enhanced soldier you’ll notice the similarities to Strider run a little too deep but that works in the game’s favor.  Your nimble protagonist has access to a wide range of offensive attacks in an adventure that is over far too soon.  But you’ll enjoy every moment as you fight a continual stream of creative bosses all alongside very pretty backdrops.  If the game were a level or two longer it would have been a classic.

Lucas Arts and JVC had already digitized the three Star Wars films on the SNES by 1994 and so turned their attention toward giving Indiana Jones the same treatment.  Rather than three separate games however you get all of them in one mega package, a huge bonus proposition.  Each film is a full length adventure that fully covers their respective stories through gorgeous cutscenes and through gameplay.  Though developed by Factor 5 rather than Sculptured Software there are definite similarities in terms of feel.  Indy controls like Han Solo except armed with a whip instead of a blaster.  Nearly all of the film’s greatest moments have been captured in one form or another, be it boss battles or Mode 7 vehicle stages.  A bit difficult but still an awesome package.

Who would have thought one of the SNES’s earliest shooters would rank as one of its best?  Space Megaforce is part of the long running Aleste series of shooters and is one of its greatest.  The weapons system is one of the deepest in the genre, with 8 weapons that can be leveled up a whopping six times, with each different from the last!  Taking it a step further each weapon has an alternate firing mode that you can use as the situation dictates creating even more possibilities.  With 10 varied levels plus 2 bonus stages you’ll have plenty of time to experiment to see which are your favorites as the game is pretty tough too.  With excellent graphics and an involving quest shooter fans would do well to track this down.