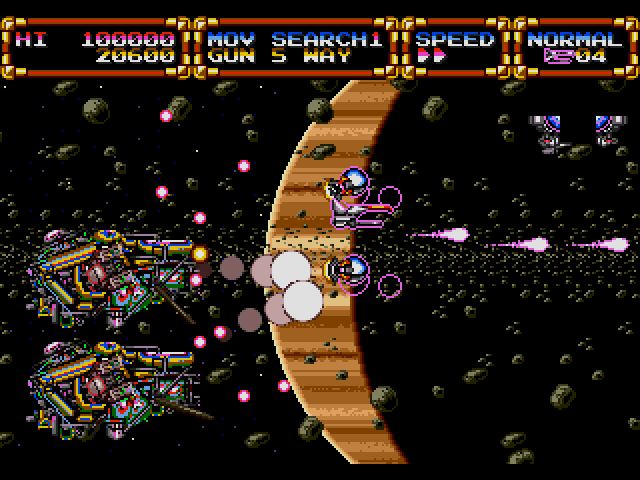 On its face Gleylancer shouldn’t be so great.  It has many features in common with the vast majority of shooters such as its weapons and even the look of its stages.  But through its clever gameplay additions and actual plot it manages to become greater than the sum of its parts.  Released in 1992 it is one of the few shooters that didn’t see an American release until recently and is one of the best shmups for the console based solely on its gameplay.

Gleylancer unlike most shmups is a shooter with a plot.  In the year 2025 an unknown alien race declares war on the human race.  Ken, a high ranking officer in the Federation Navy is teleported to a far corner of the galaxy by an enemy weapon.  This prompts his daughter Lucia to hijack a prototype fighter to mount a rescue.

The story is told through frequent cut scenes reminiscent of Phantasy Star IV (although Gleylancer came first) and while it isn’t going to win any awards the added presentation is certainly welcome.  It has that late 80s anime aesthetic that I miss so much.  Of course the story is lost on those who can’t speak Japanese unless you play the fan translated rom, which will provide the context for your actions.  There are two possible endings depending on your actions, not that they are all that different but the effort is at least appreciated.

From a gameplay standpoint Gleylancer takes many of the standard weapons present in nearly all shooters and skews a little too closely to Thunder Force at first glance.  But what truly sets it apart is the amount of control you have over your gunners.  Much like options the gunners add to your firepower when you collect any of the special weapons and can attack independent of your target.  Plus you can lock them in place when necessary.

This control is further enhanced by the numerous formations you can choose from at the start.  The option to stick with standard gunners is there but the game becomes far more interesting when you begin to play around with the other six.  Some are the basics that you would expect such as the reverse formation.  Shadow essentially turns them into Gradius style options with the caveat that they can only fire forward.  Roll turns them into a rotating shield.  It gets more interesting with the Multi formations.  These restrict their movements within a 180 arc along the top and bottom of the ship but essentially creates three-way fire.

The most useful and game breaking is the search option.  Although the game tries to warn you that it isn’t very accurate in reality it is the most versatile and aggressive.  Not only do they actively target every enemy that appears on the screen they can also be set up to seek out their own individual targets.  It’s like a combination of almost every other option combined in one.  When combined with a strong weapon like the laser you won’t even see most enemies until the second half of the game.

The level design tends to run hot and cold.  When the game is at its best it will challenge you to make the most of your gunners, switching between focused fire and setting them at fixed angles for maximum impact.  But in its lazier moments you can sit in the middle of the screen and barely move if you have a particularly strong form.  Normally this would be disastrous but because the game is so long it evens out.  You learn to appreciate the game’s quieter moments and test out different positioning without fear of heavy consequences.

I found the game’s challenge to be at the perfect level.   The first few levels are simple enough and present enough situations that you’ll want to experiment with the different formations and their behavior for maximum effect.  The second half picks up considerably, with larger capital ships attacking in groups as well as more elaborate stage designs that will box you into a corner.  Once you’ve mastered the intricacies of controlling the gunners it becomes easier to escape the most dangerous situations unscathed.  Despite working off a checkpoint system weapon drops are frequent enough that you won’t be powerless for long and can get back up to speed in less than a minute, a far cry from most shooters where death means you might as well reset.

Graphically because the game resembles Thunder Force so closely comparisons can’t help but be made and in this regard it comes up short.  Lightening Force was released the same year and looks almost a generation ahead of this despite the similarities in stage themes and such.  That isn’t to say Gleylancer doesn’t have its moments but the presentation is definitely uneven.  Some of the outdoor backdrops such as the fiery planet and the battle among the clouds are truly impressive, with layer upon layer of scrolling creating the illusion of depth in its backdrops.  But for every level such as this there are many that are flat, drab, and bring out the worst in the game’s low color palette.

The sound production also suffers from this same rough design.  The music is nice and catchy but the sound effects are weak and lack sufficient punch.  Plus there only seem to be four or five sound effects that are repeated too much.  There’s some sampled speech thrown in here and there with the announcer offering little bits of commentary on what’s coming ahead and giving quick advice to survive.

Gleylancer is a triumph of gameplay over graphics, with plenty of options to entice any shooter fan to play through it three or four times.  With eleven levels you won’t finish it in an hour and will get plenty of bang for your buck.  If the graphics and sound were of a higher standard this could have been the best all around shooter for the system.