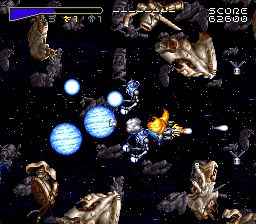 It really is shame that due to licensing issues Macross hasn’t been able to develop a presence in America despite being one of the major series that introduced anime to the US.  The series has seen many installments over the years, from Macross 7 to the semi recent Macross Frontier with none of it reaching our shores.  And yet in spite of that the fandom is still tremendous.  Too bad we aren’t given the opportunity to show just how much we love it.

That said we really aren’t missing anything on the video game front.  There have been a long line of Macross video games spanning multiple console generations and almost all of them have been terrible.  Which makes Macross Scrambled Valkyrie such an anomaly.  I don’t know who the developers are but they work wonders with the hardware with Scrambled Valkyrie being not just an excellent technical showpiece but one of the best shooters available for the SNES.  And since it’s a shooter no knowledge of Japanese is necessary to enjoy all it has to offer.

The VF-1 has three different modes that can be switched at any time, each with their own form of attack.  The weapons for each form can be powered up three times individually, with any hits setting it back one level.  Your choice of the three heroes at the start will affect your approach to the game as their weapons are also individually tailored.  Hikaru Ichijou (Rick Hunter to us) is well rounded with his weapons skewing close to a typical Gradius style.  The Gerwalk form is near useless for him.  Maximilian Jenius is faster than Rick but suffers from a low life bar and only displaying his true worth when his weapons are maxed out. If you can adjust to his speed he is easily the best choice.  Millia Fallyna has the strongest weapons but they come with the caveat that they are hard to use due to only firing straight forward.

Probably the coolest “weapon” in the game is the Minmay cannon.  If you avoid firing any shots your Veritech fighter will glow.  Nearly any of the fodder enemies you touch will immediately join your side as an invincible drone.  The extra firepower is more than welcome and although you don’t directly control their actions you can still position them to abuse their invulnerability.  The completely random gunship I converted on stage 2 valiantly fought by my side until I ultimately died two levels later.  The game is frustratingly selective in terms of the enemies that you can alter but the fact that this feature is even in the game is awesome to begin with.

The controls are kept simple at just two buttons, one for shooting and another to change forms.  Switching fighter modes plays heavily into the gameplay as each has their own individual quirks beside their weapon.  Fighter mode is the smallest and fastest, GERWALK kind of occupies the middle ground while Battroid offers the heaviest firepower but makes you a larger target.  The game is designed such that you can’t simply stay in one form and call it a day.  There are many situations where a given form is more suited such as the black holes in stage one; the fighter is fast enough to escape their gravitational pull while the Battroid would get sucked in.  That’s not to say that it is mandatory.  With some skill I’m sure the best pilots can manage but you’ll be hard pressed to convince me that it’s possible to beat the stage four boss in Battroid form.

The game covers a lot of ground despite only having seven levels.  This is a slower paced shooter outside of stage four, not that it diminishes the game’s intensity one bit.  The initial asteroid field filled with space debris, black holes and corpses is fairly impressive and the game continues to ramp up from there.  You’ll eventually invade an enemy base, fly around the rings of Saturn and even navigate the insides of the UN Spacey.  As each stage is pretty long the game does a pretty good job of varying up the layouts right up until each boss.  Another cool touch, with a few exceptions each level has completely unique enemies.

Even in light of the fact that you have a life bar and frequent power-ups this is still one tough beast.  One life and seven continues isn’t all that much to work with, especially since you are kicked back to the beginning of the level when continuing.  The levels are a bit long so having to retrace your steps, especially on some of the more brutal arenas might kill your motivation to continue.  But the game is so accomplished in every other facet that you will, if only to see the next set piece.

Visually Scrambled Valkyrie has few peers within the shooter genre on SNES or even during the 16-bit generation.  There is a ridiculous attention to detail spent on nearly every sprite and background, so much so that you’ll probably pause the game just to marvel at your surroundings.  The debris filled space graveyard of the first level sets the tone for the rest of the adventure with some levels such as stage six’s cloud filled moon featuring layers of scrolling as far as the eye can see.  The show’s various mecha provide ample material for the various enemies you’ll face in the game with some of the larger ships and bosses bearing an almost pre-rendered look.

The game is heavy on the special effects, transparencies in particular.  The numerous black holes and teleporting ships never cease to amaze as they make a smooth transition from a complete void.  There is some slowdown in some of the more hectic parts of the game but these moments are very few.  The soundtrack features remixes of some of the show’s more popular songs and while they are good they are still cheesy in that 80s anime way.

Too bad this never saw an official release in America.  But that doesn’t matter in the slightest as no knowledge of Japanese is required and what little text is in the game is already in English (very bad English).  This is one of the finest shooters of the era regardless of platform and one fans of the genre should track down.