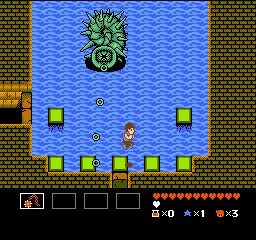 These days there are probably few who remember Star Tropics as it seems Nintendo has washed their hands of it completely.  While some remember it fondly to others it has a bad rap as a cheesy Legend of Zelda rip-off.  To some extent it’s true; it’s immediately obvious where the game’s inspiration came from.  But in my opinion there are enough unique ideas in Star Tropics that it can stand on its own two feet as an enjoyable action RPG for fans of the genre.

Mike Jones is visiting his uncle, archaeologist Dr. Jones for the summer on C-Island only to find him missing on arrival.  After questioning his assistant Mike decides to explore the surrounding islands for his uncle after discovering a letter addressed to him, stating that he was in fact abducted by aliens.

From its interface, puzzles, and many of its items Star Tropics is a blatant clone of Zelda.  Created specifically for America I wonder if the reasoning behind its creation is that Zelda might have been too complex for most gamers.  As a linear experience it’s much easier to get into and its mechanics and puzzles never reach the abstract levels of its older brethren.  While the feeling of déjà vu is ever present the game’s story and setting are at least interesting enough to make up for it.  Despite the massive coverage Nintendo Power dedicated to the games the series never caught on as well as it should have, leaving guys like me to extol its virtues.

Since the game is divided into 8 chapters you won’t have to explore the overworld for your next objective.  The overworld map is littered with many towns, dungeons and other locales to explore.  In most cases you’ll enter the towns to learn of a problem that needs solving in order to progress, leading to a cave or dungeon.  Though linear you are still free to explore the confines of each chapter’s section of the world map.  Heart containers and are hidden in clever locations for those willing to seek them out.

The caves and dungeons are where you’ll spend the majority of your time however and this is where Star Tropics takes its cues from Zelda.  All dungeons are room based and reach pretty sizable proportions early on.  There are enough hidden rooms, fake exits (you’ll curse when it happens), and traps that it’s conceivable that you’ll die often.  By Chapter 4 the number of instant death traps like spiked pits, rolling balls and my favorite, water traps increases significantly.  To say nothing of the game’s tricky puzzle elements.

The vast majority of puzzles you’ll encounter in the game are of the switch pushing variety.  The special switches perform numerous functions such as opening doors, destroying passages, revealing items, or even assisting in killing bosses.  It could very easily have become repetitive in short order but Nintendo has varied up the switches so that each one feels unique.  In most cases you’ll see the switch but will have to figure out the proper route to hit it.  There’s a heavy dose of platforming in the game that steadily ramps up in difficulty. You might not think it’s possible to die seeing as you can only jump when there are blocks to reach but disappearing blocks or approaching enemies will throw you off your game.   It’s in this regard that Star Tropics manages to distance itself from Zelda despite its surface similarity.

As well as its puzzles Star Tropics manages to avoid bogging you down with an extensive inventory.  Your initial weapon is a yo-yo that will upgrade to a Morning Star and finally a Super Nova.  Your weapon is dependent on your life bar as it degrades once your life dips below certain points.  There are a slew of secondary weapons such as baseball bats, bolas, and lasers that are limited in use.  There are a few special items that only see use in the dungeons as well, such as the Rod of Sight (to see ghosts), the lantern, or stop watches to freeze enemies.  While the burgeoning inventory of Zelda and other games of its ilk is missed it does keep the game flowing.

What doesn’t however are the game’s rigid controls.   Like the blocks that you spend copious amounts of time jumping on the game’s movement is grid based.  You can’t make slight movements, it’s all or nothing.  While the original Zelda limited movement to the four cardinal directions it was designed around that restriction.  With the exception of the floor tiles each room here is not.  Speaking of tiles, because you move so slowly (especially when jumping) the later portions of the game that feature excessive platforming become tedious.  It’s not to say you can’t adjust but the game suffers slightly as a result of this.

Star Tropics is a solid alternative to Zelda and a game that I urge any fan of action RPGs to seek out.  Nintendo’s use of Zelda as a starting point works in the game’s favor and in the end Star Tropics is unique enough that it shouldn’t be a deterrent.