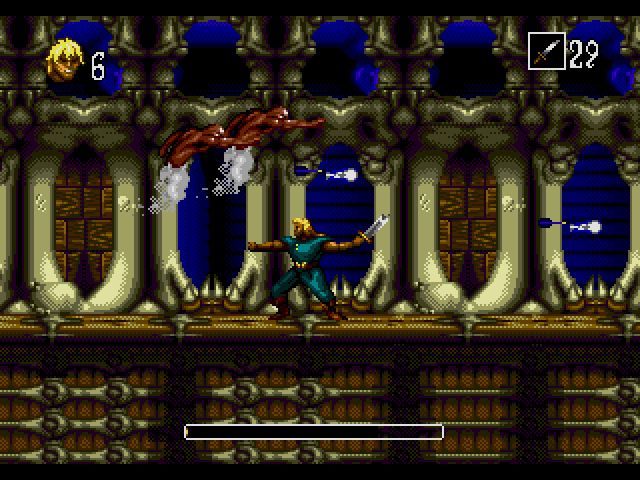 Now here’s a cartoon that I had all but forgotten about.  The pirates of Dark Water was an intriguing opus in a unique world that was a bit darker than other children’s cartoons of the time.  Although my interest in the show waned I always assumed it completed its run however apparently it wasn’t popular and so was cancelled midway through its second season.  But not so unpopular that it wouldn’t eventually have a few games under its belt.  The Sega edition takes the form of a flawed action adventure that skirts the edge of greatness but is let down by a lack of polish.

The world of Mer is beset by the Dark Water, a substance of unknown origin that consumes everything it touches.  Legends say that if the thirteen jewels of Rule can be assembled the Dark Water can be vanquished and it falls upon the young prince Ren and his crew to find them before the pirate Bloth can use them for his nefarious ends.

Since the show was cancelled the 16-bit games are the closest fans will ever have for any sense of closure.  This is a story heavy adventure, a bit uncommon for the genre.  Pretty much every character from the series makes a cameo in one fashion or another and a great deal of information about the world itself is espoused.  Perhaps a bit too much as the story is told through giant reams of text; everyone has plenty to say and you’ll want to just get to the point.  It sounds nitpicky but it’s something you’ll have to see for yourself.

All three heroes can be chosen on each stage however the differences between characters aren’t as pronounced as you would expect.  Ioz can kill most enemies in one hit, Ren is the most balanced while Tula is the fastest but weakest.  All three have a double jump, melee attacks and various projectiles and there may be slight differences in jumping height and distance, not that I ever noticed.  If you feel a change is in order you can feed 10 watermelons to monkey bird companion Niddler to switch.

Each level usually has a set objective that needs completing be it collecting one of the jewels or other item needed to progress in your quest.  Each level is pretty large in size with many hidden items, traps, and foes to fight.  While huge areas with plenty of secrets to discover is nice the game’s structure does its best to dissuade you from wanting to explore.  In every stage there are NPCs who will block your progress until you perform some task or provide the items they seek, usually gold.  Fetch quests aren’t so bad by themselves however in every case you’ll have to go back through the levels and face all of the respawning enemies again just to make progress.  Gold in particular is a pain in the ass as there have been many occasions where I had to walk through walls to find hidden stashes just to make the cut.

It’s a pretty big world with many different regions that are all distinct and a treat for fans of the show but for every good idea put forth the game’s slip shod execution holds it back.  The hit detection is problematic as I’ve watched enemy’s ignore multiple sword swings in a row, a feat that is compounded by the fact that they attack in groups.  There’s a heavy emphasis on platforming with multiple routes to the end at times.  But once again there are elements that make this seemingly easy gaming staple a chore.  There is some dubious enemy placement and the most common occurrence will see you falling off a ledge due to being knocked back.  It’s possible to end up in a loop as the game will return you to the same platform if you fall too far.

All of these issues might lead you to believe that the game is unfairly hard but it’s actually the opposite.  Extra lives can be found pretty easily and seemingly every third enemy or so drops life restoring meat or hearts.  You can even hold a few in stock for a quick boost when necessary and in combination with the near game breaking invincibility potions you can breeze through the game.  In fact when you die you respawn right in the same spot!  With all these factors in mind sloppy play won’t come back to bite you in the ass.

While I have been a bit harsh on the game it’s not because I find it terrible.  When all of its parts are working as intended Dark Water is an engaging action adventure.  But every time one of its flaws crops up (which is frequently) it becomes apparent that the game needed a tuning pass to iron out the smaller details that make a truly excellent game.

The Pirates of Dark Water had the makings of a fine escapade but in the end has a few rough spots that are hard to ignore.  In spite of that however there is plenty to like as the graphics are pretty detailed and the quest is long.  If you can overlook its flaws you’ll be rewarded with a solid adventure.