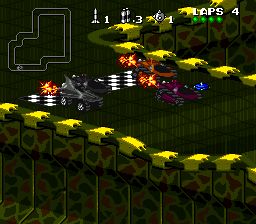 Of all the genres that are hard to go back to pre-3d racing games probably rank first.  It’s not to say every 2d racing game is bad but the move to 3d gave the most benefit to the genre.  Stand out titles like Super Mario Kart and F-Zero still hold up but for the vast majority the varying attempt at simulating 3d can be pretty laughable.  But when a game did something different it was really special.  Blizzard’s Rock n’ Roll Racing was one such game and infused its isometric racing action with a shot of heavy metal to create one of the more unique experiences of that era.

The game certainly does take the Rock N Roll part of its title seriously.  Each of the six playable characters looks as though they could have been the frontman of a hair metal band from the 80s.  Aside from looking pretty groovy each comes with a bonus to two of their stats such as cornering, acceleration, and jumping.  It’s a tough choice to make since your decision means you’ll possibly have to shore up any weaknesses through car upgrades.

Aside from its front end rock & roll plays naturally shows up as the game’s soundtrack.  These aren’t generic guitar riffs however as the game makes use of five of the most popular rock songs of the time: Highway Star by Deep Purple, Born to be Wild by Steppenwolf, Bad to the Bone by George Thorogood, Paranoid by Black Sabbath, and the Peter Gunn theme by Henry Mancini.  The game does a pretty damn good job of recreating these masterpieces minus the vocals as they are instantly recognizable within the first few notes.  I do wish there was more as these five songs are repeated throughout the entire length of the game.  What does help to distract from the repetitive music is the color commentary provided by Larry Hoffman.  Though limited to certain key phrases there’s a decent variety and he also refers to individual racers by name.  The fact that they even went the extra mile and included this much speech is commendable and is only topped by later sports games.

The game has many similarities to R.C. Pro Am, from its viewpoint and controls to its emphasis on destroying your AI controlled opponents in addition to placing in each race.  Being blown up doesn’t end the race but does cost precious seconds as you respawn which can potentially cost you the match.  Weapons come in the form of mines, rockets, and turbo boost with each replenished after each lap or for landing a finishing blow on an opponent.  The weapons also change depending on your current ride although the functionality is more or less the same.

Placing in the top three awards different cash prizes that can be used to upgrade various parts of your current vehicle or buy a new one.  Buying a new car isn’t as cut and dried as you would expect; not all cars share the same parts with some missing the option to upgrade certain aspects such as jumping ability or tires.  In some cases it sticking with what you have and shoring up its weaknesses is a better prospect.  The Battle Trak has great handling and works extremely well on New Mojave but starts to slip once you reach the ice planet whereas the Havac completely ignores all terrain hazards but is also expensive.

Each planet is divided into two divisions with a set point total needed to progress.  You are only awarded points for placing in the top three and with each division only featuring a set number of tracks there’s little margin for mistakes.  There’s a ton of tracks in the game, over forty or so in total as each planet increases the number of races to correlate with the rising number of points needed to progress.  While you can earn the necessary points to move on early if you are good enough it’s advantageous to milk each division for extra cash while you can easily dominate them since you’ll need it.

The difficulty curve in the game is well tuned and near perfect.  Early on the AI controlled cars are less aggressive and more prone to mistakes that you can exploit for easy wins.  But by the second planet you’ll notice an increase in their aggression as they’ll start each race with nitro or even unleash a flurry of missiles in an effort to destroy each other.  Those mines and puddles that you’ve been driving over with reckless abandon now cause spill outs and loss of control and even instant destruction.  If you haven’t been upgrading it comes as a shock to see that you’ve been blown up seconds into a race.  It’s definitely a challenge but in a good way; there’s no rubberband AI to cheapen your victories either.  The game’s pacing does suffer in that Division B is simply the same courses but a little harder.  Having to complete the same set of levels twice, especially on later worlds where you’ll need to complete at least 10 to advance gets old fast no matter how good a game is.

With great graphics, an amazing soundtrack and more content than 3 racing games combined Rock N’ Roll Racing has definitely stood the test of time and is still fun even today.  The game is available on the SNES, Genesis and even Gameboy Advance and all three versions are worth your time.