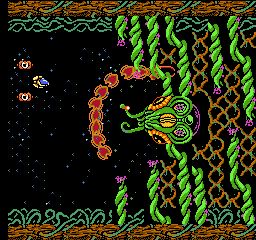 In the pantheon of great NES shooters you’ll generally see names like Gradius, Life Force, and maybe Zanac thrown around. For the import savvy Crisis Force and Recca: Summer Carnival 92 will undoubtedly make the cut. But you’ll rarely hear about Over Horizon. This Japanese and European exclusive has maintained a low profile throughout the years but is easily one of the greatest shooters for the system. Once scheduled for a US release it was unfortunately cancelled; I guess Hot-B figured fishing games were a hotter commodity. Publishing screw ups aside Over Horizon is another in a long line of games that should have been released here. The US market missed out on a truly great game that is only let down by its brevity.

At first glance Over Horizon doesn’t seem to be any different than the majority of shooters on the market. The weapons are fairly standard for the genre, a homing shot, bombs that explode on impact and powerful but thin lasers. These can all be upgraded to increase their power though nothing too dramatic. Options are available and can be slightly repositioned by pressing both buttons at once. The control scheme enables you to fire both in front and behind which is needed as enemies stream in from both sides frequently.

While the weapons are fairly unimpressive on their own the game puts the tools in your hand to tailor them how you want. The Edit mode is one of the most innovative features in the genre and gives you the power to tweak each weapon as you see fit using a simple interface. You are given five points to allocate per weapon and imbue them with characteristics of the other two. The more points put into a choice the more it will favor it. For example when editing the laser if you put four points into homing and one into bombs the new laser will aggressively track enemies with a small explosion on impact. Putting points into the laser can increase the power of the weaker homing shots, shoring up its weaknesses. There’s a large amount of choices and the game even provides a brief test level so you can see how your edits will play out in practice.

Options can also be changed up, allowing you to place them literally anywhere on the screen. You can even place them on the extreme edges on the screen but you would have to be pretty damn stupid to try that. Depending on their placement it does have a profound effect on your immediate firepower and in certain positions they are useless; since they fire in whatever direction you are placing one immediately behind you is ill advised. You can even customize the direction your options will rotate when both buttons are pressed although managing this one is trickier in the heat of the moment.

The level design is Over Horizon’s second best trait. Each of the six world’s you’ll visit is wildly different and presents new obstacles to deal with on top of the fodder enemies. It makes flying through each stage far more enjoyable then normal as a result and adds to the challenge. Stage 5 has multiple waterfalls that slow your movements and constantly push you down. The ice fields in stage 2 have to be manually pushed in order to build pathways to survive, oftentimes leading to nail biting last minute saves. Throughout all of this your weapons are never overpowered to the point the game feels trivial; up until the game’s closing moments it is easily possible to be shot down.

The one area that Over Horizon comes up short in is its length. The game is only six levels long which is absolutely criminal when the mechanics are this accomplished. Thanks to the game’s generous respawn system it’s possible to blitz through its tougher moments, especially when extra lives are awarded at a decent clip. One or two more levels to allow you to fully experiment with its weapon editing mode would have given it a shot at being the best overall shooter for the system. It’s that good.

The production values of Over Horizon are no slouch but aren’t in the same league as technical beasts such as Recca. The game’s graphics are carried by its phenomenal artwork. Most ship and enemy sprites are small, leaving plenty of room for the game’s exotic worlds to be fully realized. There’s a high degree of detail in each level, from the giant vines and plants of stage 1 to the massive ice flows of stage 3. Speaking of massive the bosses are often screen filling monstrosities that often try to use their size to box you in. You can tell the majority of the game’s budget was lavished on them and it pays off. There is some slowdown in the late stages of the game but surprisingly it has been kept to a minimum.

Even with its short length Over Horizon is one of the NES’s best shooters. The edit mode is a feature that I wish more games would have explored, not only just shooters. It is thanks to this element that you’ll more than likely play through the game a few times just to see how creative you can be. With one or two more stages this would have been a classic.