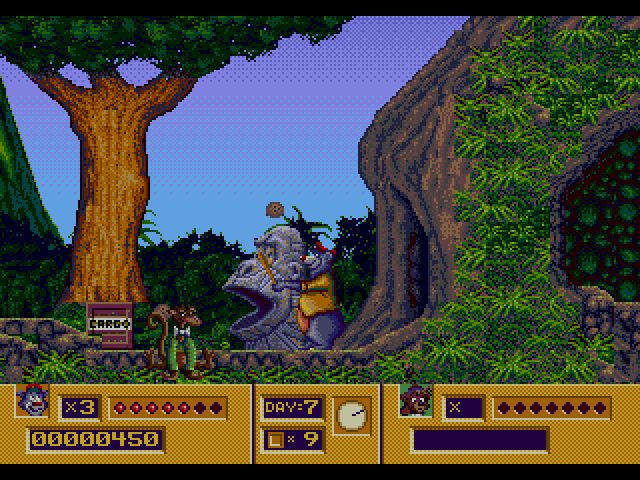 TaleSpin really can’t catch a break when it comes to video games it seems. The NES game was heavily flawed but had the kernel of a good game buried underneath shoddy execution. The Turbo Grafx game…..the less said the better. There was reason to hope the Sega Genesis game would turn out okay as Sega consistently did right by the Disney license but that simply isn’t the case here. Whereas the red carpet was rolled out for Donald and Mickey Mouse Baloo received no such treatment as this game is just as bad as the others.

At the very least the game’s plot wouldn’t seem out of place in a random episode of the TV series. The mayor of Cape Suzette is holding a flying contest with the winner receiving a lifetime contract with the city. Unfortunately Higher for Hire has a stiff challenge ahead of them as they must beat Shere Khan’s time in under 7 days to win.

I don’t know if Sega should be commended for creating a platformer rather than the obvious shooter that the show’s premise would suggest. There’s nothing wrong with going against the grain so to speak but only if the game has the proper execution, which in this case TaleSpin doesn’t. Aside from the terrible hit detection and repetitiveness lies a game that is too hard for the younger set and too frustrating for the average gamer to deal with.

The controls are pretty simple with Baloo using a paddle ball as his offensive weapon and Kit is equipped with a slingshot. Random unmarked crates can be picked up and later stacked to climb unreachable areas. The differences between Baloo and Kit are slight; the slingshot has a longer range however in the game’s few shooting stages Baloo pilots the Sea Duck. If you chose Kit the computer controls the plane while you are tethered by a cable and I’ll tell you right now that the AI is borderline retarded and will actively fly you into enemy ships.

The object of each level is to collect crates of cargo to open up the exit and move on to the next country. Each individual stage is pretty massive in size and is littered with cargo, more than enough that you don’t have to track down every single box before progressing. The cargo crates can be anywhere; behind walls, underwater, etc. so if you’re having trouble reaching a particular area chances are you can skip it and find an easier catch. Technically there is a time limit as you have 7 days overall to make it to the end of the game however the clock is so slow that I made it close to half way through the game before it ticked down to day 6.

The list of flaws are pretty significant and weigh the game down almost from the start. The main one is the terrible, terrible hit detection. Most enemies can only be damaged during very specific frames of animation; the fodder enemies don’t pose much of a threat as they go down in a single hit. It’s the game’s bosses that are the most frustrating when it comes to this. Smacking Don Karnage’s henchmen in the face 10 times only for one hit to register is flat out bad game design. Having to wait until they attack in order to damage them when you should be trying to run away to avoid trading blows is not fun at all.

When you aren’t dreading each boss encounter you’re going to get sick of the overabundance of snakes and crabs at every turn. Seriously its overkill. Nearly every time you take a dip in even ankle deep water chances are a tiny crab will attach itself and drain your health. Granted there’s usually a burger nearby to restore your health but god damn, show some restraint.

As much as I like how wide open the levels are it does get repetitive after a while. Aside from dealing with the same snakes and crabs time and time again there are only three bosses that are recycled until the end of the game with their means of attack being the only difference. They even take place in the exact same room each time (well sometimes there’s a crack in the floor for no good reason). The shooting levels are all exactly the same with the only change being the number of enemies you face and their level of aggression. The controls are loose in these segments but somehow still workable but you would think they could at least get the shooting portion of the game right (as that was the main focus of the show).

Graphically TaleSpin is decent but could have been better. There’s a high level of detail in the game’s backgrounds but they are a bit generic. This is a shame as the show took place in the 30s and had an art deco influenced style. There’s none of that here and it could have been used to really distinguish the game from everything else on the shelf, let alone Sega’s other licensed titles. As it is the grainy color scheme places it below the Castle of Illusion series.

TaleSpin isn’t completely terrible but its flaws are frustrating enough that I imagine most won’t put up with it for long, leaving the game without an audience. TaleSpin deserved better than this.