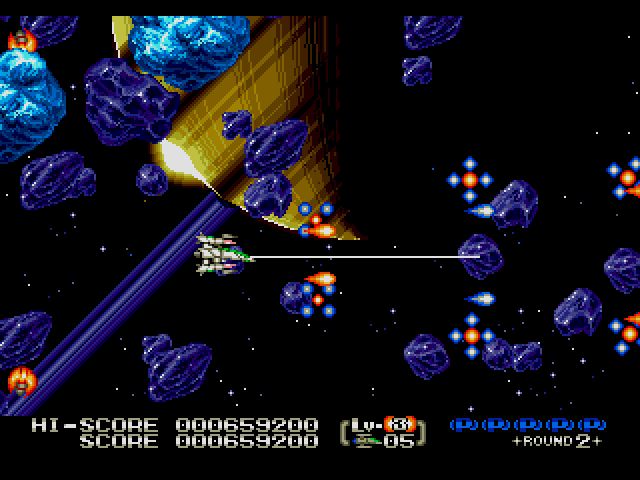 Shooters were a dime a dozen during the 8 & 16-bit era in the US, to the point we were drowning in them.  From R-Type to Gradius there were many interesting takes on the genre across many platforms and the arcade with most placing a focus on fast action and quick reflexes.  As such the Genesis was the perfect home for these games due to its fast processor and saw many a classic release in the genre’s heyday.  There are probably close to 50 shooters altogether in the system’s library and that’s not including the Sega CD.  These are the greatest in my humble opinion.

Trouble Shooter was an odd localization choice from Vik Tokai but also one that turned out to be one of their best titles. Controlling two characters at once and managing their positioning and direction of fire offered an interesting take on the standard “options” of the genre. It only came up short in length and challenge, two areas that Battle Mania has cleared up beautifully, creating the classic it could have been. Battle Mania offers more of everything, bigger and more destructive weapons, significantly improved graphics, and more of the same humor and charm that made the first game so endearing. The level design is some of the best among shooters for the platform and with that comes a bump in difficulty. Despite the increase in difficulty the game never feels cheap and is always fair, enticing you to keep going. With a longer quest you get your money’s worth, especially since this is one of the most expensive Genesis imports due to a low print run.

Lightening Force set the bar high and is quite possibly the greatest shooter for the platform, no small feat considering the heavy competition.  But this is no ordinary game.  Lightening Force refines the series mechanics and pushes the system harder than most and breaks it but the game never suffers too heavily in the process.  All this and the game was released in 1992! There wasn’t much that needed to change in terms of mechanics and so Technosoft merely polished what was already a solid set of mechanics. The weapons have been upgraded and the CRAW is fun to play around with but the game will still kick your ass repeatedly but you won’t care because you’re having so much fun. With damn near Neo Geo quality graphics, an excellent soundtrack, and pitch perfect gameplay it is the definitive Genesis shooter and one that every fan of the genre should track down.

Gaiares is probably remembered more for its silly advertising campaign than for its stellar gameplay. Don’t let the guy with the mullet fool you though, this is one of the absolute best shooters ever released for the console.  That’s hefty praise but the game itself lives up to the hype and then some. It has everything that would place it in classic status, excellent graphics, innovative gameplay, and tight controls but the challenge is higher than the average gamer is used to.  The option to steal weapons from enemies was innovative for its time and the game offers plenty of opportunities to use this mechanic with a wide assortment of armaments to test out. If you’re the type that can stomach a game that puts up a fight Gaiares is everything you can possibly want.  But if you’re a weak sauce gamer who needs his hand held look elsewhere.

Eliminate Down is the only title developed by Aprinet and had they stuck around I have no doubt that they would have been spoken of in the same tone as Cave and Compile when it comes to shooters. The game’s weapon system provides you with all three at the start and allows you to level them up at the same time. It’s a wise choice since each stage will provide ample opportunity to put them through their paces. The level design is the strongest aspect of the game as it scrolls in every direction and tosses you from one insane scenario to the next. Next would be its graphics. While bearing some resemblance to Wings of Wor and R-Type visually ED is a step above those two with some of the best art on the system. Sadly to sample this greatness will cost you but I dare say it’s worth it if you are a fan of the genre.

On the surface Gleylancer closely resembles many other Genesis shooters but after just a few minutes it distinguishes itself with its unique and customizable gameplay. The many formations you have to govern the behavior of your Gunners and the control you can exercise when it comes to positioning places it above Gradius. And it has a plot! While it isn’t the greatest it is told through anime style cutscenes that serve as nice bonuses for completing the levels. Playing around with the different formations is incredibly fun and provides some impetus for replaying the game more than once. While it lacks the hardware defying graphics of its peers it beats the pants off most of them in gameplay.

What a difference a year makes. As much as I wanted to like Thunder Force 2 it was heavily flawed. Thunder Force 3 tosses out the aggravating vertical levels and puts a laser focus on its stronger side scrolling stages and does it with aplomb. It does just enough to feel different from R-Type and Gradius while still incorporating the best elements from those games to create one cohesive whole. The ten levels cover nearly all the video game staples but you’ll rarely see them look this good. There’s a great deal of variety in each of the game’s worlds since the game is so long that is appreciated and will keep you from becoming bored in combination with the awesome graphics. In stark contrast to many of the games on this list I found it a bit easy as the weapons are a bit overpowered but that isn’t a complaint on my part as I’ll gladly take overwhelming force over hitting like a wet noodle any day. Thunder Force 3 would become the standard other Genesis shooters would be measured against until its sublime sequel.

The Aleste series of shooters has a long lineage spanning multiple consoles and computer formats but this Genesis installment is possibly one of its strongest. Developed by the masters at Compile you already have an idea of what to expect in terms of gameplay but even in spite of that M.U.S.H.A will surprise you with its highly detailed world and extensive back story. The most unique aspect of the game is its world; although set in the distant future the aesthetic is decidedly retro.  You’ll see many massive warships designed after ancient Japanese temples and the like as you fly over the many cities of the world. While its only seven levels long M.U.S.H.A is one of the most intense shooters ever released for the Genesis; so intense in fact that the system is forced to tap out resulting in slowdown and occasional flicker.

God I love Steel Empire. If there’s one criticism you can lobby at the shooter genre it’s that most recycle the same tired space theme. Steel Empire is set in an alternate version of the 1930s where steam powered dirigibles are commonplace. Right then and there it deserves your attention. You have a choice between a high powered zeppelin or fast but weak airplane as you plow through its seven levels of steam punk influenced adventure. The setting alone warrants attention but the engaging gameplay and beyond beautiful graphics are what will keep you coming back for more. It’s a bit tough in in its later stages but never to the point you will feel its cheating. Plus you’ll be having so much fun gawking at the visual design that it won’t matter.

Take the side scrolling levels in Legendary Wings and give it a lethal shot of steroids and you might have an inkling of just how amazing Wings of Wor is. Your angelic avatar is packed with more firepower than 2-3 lesser shooters combined and yet the game still manages to kick your ass. The demons you’ll face are an odd fusion of man and machine that look both bizarre and awesome at the same time. The graphics are incredible, with huge screen filling bosses you’ll have to see to believe, all accompanied by a nice orchestral score. This could very easily have passed for an arcade game but is a lucky Sega Genesis exclusive that has flown under the radar for some god forsaken reason. If you’re a shooter fan do not pass this up.

Robo Aleste is probably the best overall shooter for the Sega CD and one of its best games to boot. As a follow-up to M.U.S.H.A it doesn’t take place in the same world but follows the same general theme of ancient Japan meets futuristic technology. Unlike that game RA has a longer quest and more involved story. Speaking of which, this is one of the longer shooters on the market, topping out at 10-12 levels long.  Each stage is of varying length with some lasting a scant few minutes and come across as more of an interlude.  Others drag on a bit too long but you certainly won’t feel cheated as there is a lot of content to mine. Either way you more than get your money’s worth as the gameplay is so damn refined that you’ll relish the game’s length just to play around with its mechanics. While there isn’t much here that required the CD add-on it’s a welcome addition to its library.