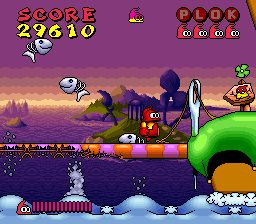 The 16-bit generation certainly didn’t need another mascot platformer but any game that at least tried to do something different was appreciated. Plok is a little known platformer from that era that went unnoticed yet managed to introduce elements that would show up in far better games a year or two later. While it has its flaws it does enough right to endear itself to fans of the genre.

Plok is the king of Akrillic Island and wakes up one day to find that his grandfather’s flag has been stolen. In anger he goes in search of it on a nearby island but this is merely a distraction. Fleas take over in his absence and colonize Polyesta, replacing his flags with their own. What’s a Plok to do? Kick some ass of course.

Criminally overlooked during one of the SNES’s slow years in some ways I can see why. The Claymation cover art is eye catching but who or what the fuck is Plok supposed to be. No seriously, what the hell is he? He looks like a blanket with arms and boots and certainly not cool, especially during the era in which Sega were successfully appealing to preteens who wanted to feel older than they really were. Many games have suffered similar fates but it was especially sad in this case. While Plok won’t win any awards for character design it was an excellent platformer with a phenomenal soundtrack that deserved better.

Years before Rayman burst on the scene (okay one year) Plok did it first. Like Ubisoft’s limbless hero Plok can also fire his hands as projectiles but takes it a step further, with all of his limbs serving as ammunition. It does come with a drawback, as you have to wait for your body parts to come back and suffer from lessened mobility. It’s pretty hilarious to see the guy reduced to a hopping torso but the fun stops when fleas or other enemies are kicking your teeth in, so to speak.

The levels have been designed with this in mind as limb tossing is used to solve puzzles as well as attacking. Many times you’ll have to sacrifice a body part temporarily to activate a switch needed to progress through a given level, sometimes even all of your appendages. The initial phase of the game is relatively simple as your only goal is to make it the flag at the end of each stage, much like Mario. There’s a balanced difficulty curve as more is expected of you and new mechanics are introduced.

About a third of the way through the game the pace picks up considerably and the game shifts in focus form flag collecting to flea extermination. New gameplay elements are introduced at a rapid clip at this point that go a long way toward relieving the game’s repetition but aren’t always completely successful. The optional suits such as the firefighter outfit, hunting gear, and even a boxing costume appear more frequently and Plok even receives a few new abilities such as a screw attack like Metroid and an amulet that converts sea shells into a mobile attack. Later in the game you’ll even get to drive a few vehicles like a tank, helicopter, motorcycle, and even a flying saucer. These vehicles are hard to control and result in many cheap deaths. All these items add some variety but can’t hide the fact that a large number of its levels are near identical and you are simply going through the motions. Hunting fleas gets old fast and you spend far too much of the game doing just that and the final levels in the Flea Lair blend together in one long unenjoyable sequence.

The game doesn’t take itself seriously and has a kitchen sink like approach in its design. It works to some degree but it isn’t perfect. As much as I like the variety in gameplay the level design isn’t as tight as it should be. The entire game world seems to be composed of interconnected islands built on hills and inclines. This leads to issues on almost every level where there are no immediate paths, leaving you to take far too many leaps of faith. There are navigational prompts that are supposed to direct you but they don’t take into account any barriers that stand in your way and will often lead you in the wrong direction.

Trying to hit enemies is also frustrating. You can only fire straight ahead and with the uneven terrain your attacks either can’t reach or fly over the heads of enemies. The first half of the game sees little combat but the balance swings the other way by its end. To some degree you can simply avoid most enemies but that completely defeats the point of having so many options and weapons.

Plok is noticeably harder than your typical platformer due to these flaws and in general. Although your life bar looks pretty lengthy in reality you can only sustain four or five hits before death. Life restoring fruit isn’t common but it’s at least easy to build up a decent stock of extra lives. What doesn’t sit right with me is the lack of passwords or battery backup. This is a pretty long game at close to forty stages and while a decent chunk last a scant minute or two it’s asking a lot to expect everyone to want to complete the game in one sitting.

Plok’s world is bright and lively to a degree not too common during the 16-bit era. It resembles a cartoon with its emphasis on bright colors and weird character and world design. The backgrounds are drawn in a hand painted style that allows the foreground to really stand out and are exquisite although repetitive. Of special note is the flashback sequence which takes place completely in black and white. As I’ve mentioned the character design isn’t the most appealing yet somehow the game is still endearing in spite of it. The soundtrack is fantastic, one of the best composed on the SNES. The music spans a range of genres, from upbeat dance to mellow, peaceful arrangements and even guitar riffs. Tim Folin, a name with a long association with some of the best soundtracks of the era along with his brother Geoff were behind the music and together they knocked it out of the park.

While it isn’t perfect there are many aspects of Plok that you’ll grow to love. It’s interesting to note that some of its ideas would make it into far better games (vehicle transformations were used to great effect in Yoshi’s Island). Plok is a flawed yet fun experiment that I’m sure some absolutely adore.