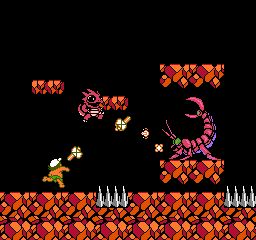 As much as I wanted to like Adventure Island it skewed a little too closely to the platformer archetype laid down by Super Mario Brothers. It was also a reskin of Wonder Boy, a game I was never too fond of. However while it was fairly unremarkable there were the kernels of a good game and Adventure Island II makes good on that initial promise. Adventure Island II goes a long way toward giving the series its own identity and is the game the first should have been.

Master Higgins has succeeded in saving island princess Leilani however her sister isn’t so fortunate. The surviving minions of the Evil Witch Doctor have kidnapped her and so Master Higgins sets out to make his girl happy.

Where the Wonder Boy series would eventually evolve into a series of action RPGs and confuse the shit out of gamers and the press alike with its numerous ports under different names Adventure Island has remained a pure platformer. Not much has changed with Master Higgins but his mechanics have been refined. The annoying high jump from the first game has been changed so that now Master Higgins will always reach the same height. The depleting life bar returns however fruit restores more health so there are fewer instances of really close calls due to bad game design.

Unfortunately you can no longer upgrade the basic tomahawk to fireballs. While the skateboard returns it is now joined by four animal helpers that hatch from eggs and will lend you their power. Each has a specific specialty such as the Pteranodon’s ability to fly (which is damn near game breaking), the Elasmosaurus’ faster swimming and the two Camptosaurus who attack with their tail and fiery breath respectively. If you complete a level with any of these allies they can be banked and stockpiled for later use which definitely comes in handy for some of the trickier stages.

The game uses the same setup of eight islands with multiple sub levels except this time there are more than just 4, oftentimes as many as 7. This time out however the levels are significantly shorter; I would say about half the length of any in the first one. With this there are no checkpoints but it doesn’t matter since you can retrace your steps so easily. With shorter stages each is more to the point, usually focusing on a single platforming element such as springs or navigating spikes underwater with the occasional tricky enemy placement thrown in. The layouts are tighter with less frequent enemy ambushes from behind or sudden pitfalls. The entire game seems as though a list of flaws in the first adventure was compiled and stamped them out, producing a more solid game overall.

There’s a greater amount of level variety since there are eight separate islands to explore. The first game only had 5 or 6 themes that were repeated throughout its 32 levels with very little variation. True the islands span nearly every platforming trope such as forests, ice, and desert but you can hardly hold that against it. When a theme is recycled it is done tastefully, with new enemy placement or even traps to contend with.   There are hidden items all over the place, most of which can be found in a more sensible manner this time around. If you hit a secret area it will play a sound and whisk you away with the rewards being extra lives, animals you can stock or my favorite, completing skipping the current island altogether.

It’s funny to compare the two but Adventure Island II has a lot in common with Super Mario Brothers 3. Both have eight individual worlds, let you stockpile items for later use and feature end level bosses that move to a new location if you happen to die. It makes sense as SMB 3 was released years prior and had a heavy influence on any platform game going forward. Of course it isn’t anywhere near that game’s quality but Hudson should be commended for not simply creating what would essentially amount to an expansion pack.

The gameplay overhaul turned out well enough but they could have done more with the graphics. This could very easily pass for the first game as they both share an almost identical look with some graphical elements carrying over wholesale. After staring at the same damn forest, cave, and plain blue skies for the length of the first adventure seeing them all over again is a friggin nightmare. At the very least the bosses of each island are unique and actually put up a fight. This was released in 1991, a year in which the very best NES developers were on fire with the hardware and this looks like a game straight out of 1986.

Adventure Island II is a solid platformer that corrects all of the flaws of its predecessor and introduces elements that would go on to further define the series. While more could have been done with its presentation that does little to diminish its value.