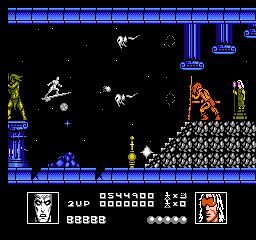 Of all the superheroes to star in a videogame I can honestly say I never would have expected the Silver Surfer to be one of them. Don’t get me wrong I love the character (the Ron Marz/Ron Lim team made some of the best stories with the character) but he is the definition of obscure, especially in the 80s. I imagine the likes of Akklaim and such took all the most important licenses and left everyone else to pick up the scraps. Speaking of Akklaim, developer Software Creations has done their best LJN impression and created one of the most difficult video games of all time.

Galactus alerts the Silver Surfer to an incursion from the Magik Domain and the imminent destruction of the universe. Five components are needed to create a cosmic device that will stop the threat but they are held by some of the Surfer’s biggest adversaries. Fans of the comic book will recognize Mephisto and Firelord but the other three? Even I had to struggle to remember them. Reptyl has only appeared in a few issues of the comic and wouldn’t have been my first choice for the game. The Skrull Emperor? I could see it. But who the fuck is the Possessor? The disappointing rogue’s gallery is the least of the game’s problems however. Where do I even begin?

You have a choice of any of the first five levels before the finale in the Magik Domain. Each level is broken up into three shorter sections and alternates between horizontal and vertical shooting, much like Life Force. That’s about as far as I’ll go with that comparison since the two games couldn’t be further apart in quality.

It’s pretty god damn hilarious that the Silver Surfer is one of the most overpowered characters in the comic realm and yet here he is reduced to a feeble leper. Your offense consists of a single bullet no more effective than the standard gun in Contra with the only power-ups coming in the form of orbs that function like options and icons that increase the power of your shots. In the horizontal levels these can be repositioned to fire beneath you or behind. There’s also smart bombs for all the good they do.

There’s nothing wrong with sub-par or lacking power-ups in a shooter; Starship Hector remained relatively decent all things considered. In this case however it just doesn’t work. You are woefully underpowered compared to the opposition you’ll face but that isn’t the reason why this is one of the hardest games to occupy a cartridge.

Get used to this screen.

Everything can you kill you in the game which follows shooter typical shmup conventions but it is taken to the extreme here. You aren’t allowed to so much as graze a wall or ceiling without the Surfer keeling over like a little bitch. It’s the same in nearly every other shooter however it seems extra touchy here. Prepare to see that death many, many times as the level of touchiness is off the charts here. The levels were consciously designed with this in mind as there innumerable tight corridors and passages to navigate through. All while enemies never, ever stop spawning. If you don’t have a turbo controller don’t bother.

And to make matters even worse, death throws you back to a checkpoint without your precious few power-ups and like Gradius you might as well reset because you sure as hell aren’t going to come back from that. And to pour salt on the wound there are no continues or even passwords. Not that this is a long game but you fight for every square inch of progress and to expect someone to finish the game in one sitting and to start over from the beginning every time is borderline insane. I honestly don’t know what possible reasoning there could have been for no continues other than to hide how bad the overall game is. Or the disappointing ending, which is the final kick in the nuts for those who persevere.

Do you want to know what is the most shocking fact in light of all the game’s issues? There were the makings of a decent shooter buried underneath all the frustration. Once you are decently powered and can survive for longer than a few seconds the game is actually thrilling once you can focus on dodging bullets and maneuvering through tight spaces. And the soundtrack is actually pretty amazing. But it all means nothing when these moments are so fleeting.

There’s nothing wrong with a game that is difficult; gamers around the world have absolutely fallen head over heels for Dark Souls. But that is because the game remains fair above all else. The Silver Surfer falls far short of that and is cheap by design and in the end a game that is not worth your time.