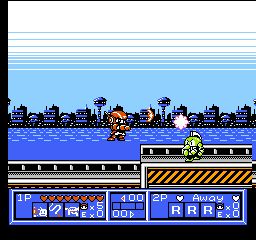 Konami’s Wai Wai World was one of the most interesting imports that never made it to the US. As a crossover starring their most famous intellectual properties it had many good ideas buried under some slight missteps. Though flawed it was still a solid game with fantastic graphics. Wai Wai World 2 came three years later and completely tossed aside everything that made its prequel unique. But in its place is a more focused quest that is truly excellent and, thanks to the work of fan translators can be enjoyed by everyone (not that it was necessary).

Wai Wai land is finally at peace after the brave Konami heroes saved the world. One day however the evil sorcerer Warumon steals the Parsley Castle along with the Princess Herb. Dr. Cinnamon escapes and does his best Dr. Light impression and creates an android named Rikkuru, who can transform into several Konami characters, to save the day.

With Rikkuru as the protagonist the Konami twins are relegated to a cameo role. Rikkuru is a far more capable protagonist since his default attack is a mid-range sonic boom. Along with his double jump there is very little that he isn’t equipped to handle. There are very few power-ups to pick up, one for invincibility, extra power bombs, and health kits. The most important are the C icons that will allow you to transform into one of your chosen heroes.

Unlike the first game the selection of heroes has been cut down to just five: Simon Belmont from Castlevania, Goemon from Ganbare Goemon, Bill Raizer from Contra, Fuma from Getsu Fūma Den, and newcomer Upa from Bio Miracle Bokutte Upa. The returning heroes are mostly unchanged with the exception of Goemon, whose pipe now functions as a boomerang. Upa is a baby whose rattle transforms enemies into clouds that can be ridden but suffers from short range. Bill is possibly the all around best character as he can shoot in four directions which breaks the game.

You have a choice of 4 groupings of three characters that you’re stuck with until the end. Curiously Upa is featured in three of them which sucks as he is the worst character. He has the shortest range and riding clouds isn’t as useful as you would think. Personally my go to team would have been Goemon, Simon, and Bill but alas, I have to work with what I’m given. You can’t freely change whenever you want; whenever you collect the C power-up it cycles between your chosen trio until you hit Up + A . The transformation lasts sixty seconds and you are functionally invincible, with any hits taken subtracting five seconds from the clock. It comes around often enough that if you choose you can stay changed indefinitely. It’s different but the restrictions imposed make sense and are so trivial that they don’t even matter.

The Metroid style adventure element of the original is gone and in its place is a straightforward platformer. While I do miss the freedom to futz around in the levels as I please the move to a dedicated action game has certainly done wonders for the game’s action. You won’t get that impression from the game’s first level though as it is an overly long forward scrolling stage that will at least introduce you to the game’s mechanics. After this initial stage however it picks up considerably and at various points you are given a choice between two stages with wildly different gameplay styles. As far as variety this might even have the original beat despite featuring less characters.

Each subsequent level after the first is a trip down memory lane as they revisit popular levels from each protagonist’s respective series. The familiar jungle from Contra makes an appearance as well as Dracula’s castle, an Edo era village, a land made of candy (from Bio Miracle Upa) and Hell itself. Some of these references are lost on US gamers as those games never made it to our shores but they can be enjoyed just as easily as the rest. What makes these tributes/mashups work so well is that they’re still just as fun regardless of the hero you’ve currently chosen. Can you imagine trying to play Super Mario Brothers using Simon Belmont as he is in Castlevania? Yeah.

Stages 3 and 6 are both different from the rest in that you have a choice at both points. Both levels are homages to Twinbee and while I’m not too fond of most of the games in that series it’s actually a pretty nice recreation of that game’s action. Stage six offers you a choice between a weird ass sliding puzzle and a terrible bump n jump clone. It’s the only weak level in the game and unfortunately you can waste a good number of lives on either one. Stage 8 is a send up of Parodius except you control the Vic Viper, not that it’s too far-fetched.

The original Wai Wai World was unfairly difficult due to some bad design decisions and it is apparent Konami set out to rectify that. This is a far more balanced game but I think they leaned a bit too far left as it is very easy to cheese your way through the entire game outside of its shooter segments. Since you are technically invincible when transformed you can keep another roulette going to change once again as soon as your current one ends. Certain heroes are literally game breaking; Bill Raizer and his ability to shoot in four directions makes most boss encounters trivial. Watch as the final boss goes down in less than 15 seconds without needing to move around.

As much as I liked the graphics in the original Wai Wai World I think the sequel is even better. All of the sprites are larger and have been stylized for a more uniform look and the consistency elevates the game tremendously. The backgrounds are insanely detailed and extremely colorful and yet somehow maintain a serious tone. The music is also better with cleverly remixed tunes from each game it draws from alongside nicely composed original selections.

Any way you slice it Wai Wai World 2 is a much better and more focused game than its prequel. Aside from its ease it is easily one of the best action games for the platform and very easy to muddle through without knowledge of Japanese.