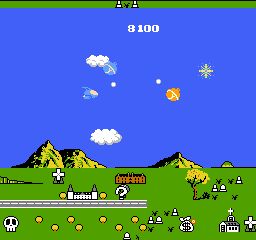 In creating the Gradius series Konami made one of the most durable and beloved shooter franchises in console history.  With its unique power-up system countless other games have been “inspired” by Gradius with some degree of success.  The Gradius formula is so well defined in fact that a separate series created as a parody of Gradius named Parodius has spawned its own line of sequels.  One splinter series that is little known in the US is Twinbee of which North America has only seen two installments, one for the Nintendo DS and this game which was renamed Stinger.

Since the first game in the series stayed in Japan certain……liberties were taken with the American localization.  Alien beings from the planet Attackon have kidnapped Dr. Cinnamon to learn the secrets of his bio nuclear sweetener.  The Attackons want to use this “weapon” to turn Earth into a giant ball of cotton candy.

While Twinbee started out as a series of vertical shooters it would eventually grow and encompass a range of genres, from platformers to RPGs.  The focus shifted from the shooting action to the characters as the series has a long running plot full of wacky characters.  Like Parodius the Twinbee series doesn’t take itself too seriously and has enough unique features to forge an identity of its own.  While Twinbee was insanely popular in Japan and Europe it didn’t leave much of an impression in the US, where Stinger was the lone entrant to reach our shores until 2007.

The unique hook of Twinbee is its power-up system.  Rather than collect items the bells that spawn from clouds can be juggled with your shots to change its color, bestowing a number of different weapons.  These cover a number of typical shmup tropes such as the twin cannon, laser, speed-up, options, and a shield.  Changing the color of the bells for new weapons takes practice and skill and the game is more than generous enough to supply a ton of clouds in case you mess up.

While most of the Twinbee games are vertical shooters Stinger bucks this trend. Like Life Force the levels alternate between side scrolling and vertical shooting.  The change in viewpoint affects the gameplay significantly as it’s easier to keep track of bells in the vertical levels.  There is a heart shaped shot added to the side scrolling that makes bell blasting easier but it’s still annoying.  Since the heart shots would be useless you have the option to bomb the ground in the vertical levels for power-ups.  Here you can take a glancing blow that only removes your bombing ability which can only be restored by a medical power-up.

The overall tone of Stinger is a bit wacky.  It isn’t strictly because of the fruity US story either, all of that weirdness existed in the Japanese version, and the American story merely contextualizes it.  You have angry coat hangers, mad sneakers, and TV sets screaming for your blood.  And don’t get me started on the bosses.  The quirkiness is dialed up to 11 as you battle a boom box, a seed spitting watermelon and other assorted food and household items.

For all of its unique features Stinger is a bit weak overall.  The horizontal levels all feel and look identical since they share similar environmental detail.  In my opinion these levels are a clear indication that Twinbee was always intended to be a vertical scrolling shooter.  Speaking of which, the vertical levels are the most intense with a seemingly never ending wave of enemies coming at you.  I’ve never been fond of juggling the bells for power-ups and my issues with it are apparent from the start.  It takes entirely too many shots to cycle through the different weapons; in most cases you’ll only see the blue bell for speed or white for twin cannons.  I realize juggling the bells and dealing with enemies is the whole point of the game but it could have been balanced better in this regard.

While the later Twinbee games are excellent and borderline phenomenal Stinger is not the strongest entry.  While it’s better than most of the early NES shooter lineup there are far too many classics to work through before Stinger would warrant purchasing.  At least if they would have kept the 3-player coop it would have merited look from coop fans.