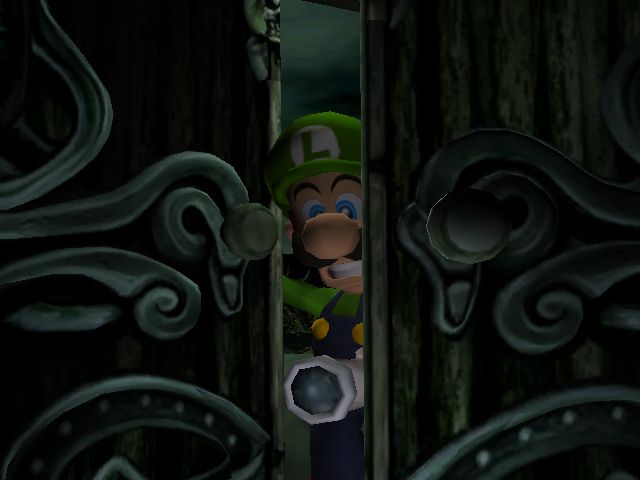 It’s hard to believe that it took nearly 20 years for Luigi to finally get the starring role in his own game (I’m well aware Mario is Missing exists but if you consider that a game I have a copy of Captain Novolin to sell you).  For the entirety of his existence Luigi had been overshadowed by Mario but with Luigi’s Mansion Nintendo used the opportunity to define his character and show that he is a unique character in his own right.  While you would expect the game to be a platformer it is instead the Ghostbusters game we’d always dreamed of (to an extent).

The crazy plot sees Luigi winning a mansion in a contest.  Oddly enough he had never entered the contest in the first place so agrees to inspect the place with Mario.  Unfortunately Mario is kidnapped by ghosts before Luigi arrives, leaving the cowardly member of the duo to save his bro.  With the assistance of Professor E. Gadd and his Poltergust 3000 Luigi plans to save Mario and rid the haunted mansion of its ghostly inhabitants.

As an action adventure game Luigi’s Mansion is armed with a raft of play mechanics.  The primary pair are the Vacuum sucking Poltergust 3000 and the Flashlight.  Throughout the adventure there are tons of ghosts that first need to have light shed on them to expose their heart, leaving them vulnerable to the vacuum’s gust.  Once you’ve begun the process of trying to reel them in it becomes a frantic battle to trap the bastards as they fight tooth and nail to get away.  The entire process calls to mind the best episodes of Ghostbusters and it’s everything you can possibly imagine and more.

More mechanics are introduced as the game progresses and the game does an excellent job easing you into their uses.  The Game boy Horror serves as a map and in game hint guide; should examining objects prove futile taking a picture will provide further clues. Later in the game the vacuum can gain elemental properties of fire, water, and ice, which increases the number of ways to capture ghosts.  The dual analog setup takes some getting used to but comes in handy when dealing with faster ghosts but for those who can’t wrap their heads around it isn’t mandatory.

Obviously the ghosts are aware of their weakness and so will hide in everyday appliances, forcing you to flush them out.  Each room of the mansion is dark until you’ve cleared the ghosts restoring light and protecting them from further manifestations (at least initially.)  The mansion is divided into 4 Areas and a basement, with access to each blocked off until you’ve met certain conditions.

While there are a ton of standard ghosts to learn the ropes on it’s the 21 Portrait Ghosts that truly bring out the game’s best elements.  These apparitions are more savvy than the typical fodder you deal with and require more meticulous methods to defeat.  It isn’t immediately obvious what needs to be done to get their attention, and their complete lack of interest in your presence certainly doesn’t help.  Snapping a picture with the Game boy Horror will give a slight hint at times but you’ll need to observe your surroundings to parse out their weakness.

One of the first examples would be Lydia, the mother ghost.  While she is oblivious to your presence as she constantly combs her hair the more observant will notice that the window is open.  Pulling back the curtains will let in a draft that will interrupt her.  As she gets up to close them her heart is vulnerable.  There’s a nice ramp up in terms of steps necessary to bag each one.  Mr. Luggs (an optional ghost) is another example.  Normally invisible, lighting the candles at his dinner table makes him corporeal.  If you suck in his dinner completely as well as the servants that attempt to bring him a replacement he will become furious and attack.  Waiting it out will exhaust him and expose his heart.  There’s a high degree of creativity poured into each one of these signature encounters, sometimes more than 2 or 3 games combined.

This makes it all the more frustrating that there aren’t more of them!  In between these fresh battles the game becomes incredibly formulaic since each room can be boiled down to the same 3 or 4 steps.  Outside of the boss battles at the end of each area there’s very little challenge or sense of danger, meaning you’ll blow through the game pretty quickly.

That highlights Luigi’s Mansion’s biggest problem: its length.  Even a novice gamer should be able to complete the game in 5 hours or so, which is a decent length in most cases but not here. This is the type of game that has zero replay value; once you’ve captured all of the ghosts the mystery is gone on successive play through.  There are 50 optional boos you can go back and capture if you so choose but aside from the initial thrill of tracking them through previously cleared rooms isn’t as rewarding.  You are awarded a score based on the amount of cash you’ve acquired throughout the game which unlocks the hidden mansion, which is the same mansion with parameters changed, such as mirrored rooms, alternate locations, and faster antagonists, but once again, it’s still the same content you’ve already seen before.

Before it blossomed into a full game Luigi’s Mansion was a tech demo used to demonstrate the GameCube’s advanced functions, a task that it does beautifully.  The lighting and shadowing effects in particular were beyond the vast majority of games to that point and are still impressive today.  Waving the flashlight around illuminates and casts shadows on nearly every surface in a realistic manner.  The cloth physics employed when using the vacuum are eerily realistic as well.

The character models exhibit a wide range of expressions, especially Luigi.  His fear is instantly palpable when a ghost sneaks up behind him and his nervousness is portrayed perfectly in his shaky knees and worrisome expression.  The ghosts themselves look almost as though they were plucked from a cartoon; this is expert art direction at its finest.

The sound design has its highs and lows.  The music is a bit Spartan, with very few tracks that tend to repeat frequently.  At the very least they are catchy.  It’s in the moments with no music that are fantastic.  Luigi is a coward so he’ll nervously whistle the game’s theme song to try to calm his nerves or hurriedly call for Mario when terrified.  the sound effects from the ghosts are pretty hilarious as well, lending to the game’s cartoon like atmosphere.

It might have been a bit unfair to look at Luigi’s Mansion as the GameCube equivalent of Super Mario 64 at release but in the end it manages to stand on its own two feet.  Had the game been longer it would truly have been excellent, but will have to settle as a solid foundation for its upcoming sequel.