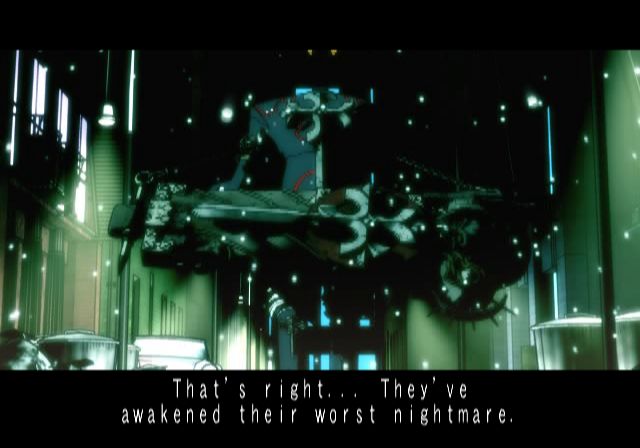 For many years the action genre suffered in the transition to 3d.  Whether it was an atrocious camera, terrible combat mechanics, or a simple lack of understanding as to how to move the buttery smooth gameplay of the best action games of the times into the third dimension, the PS One era was rough for fans of the genre.  While other genres such as platformers had games like Super Mario 64 that laid down a foundation for others to follow, most action games during that time were merely adequate.

All of that changed with Devil May Cry.  Finally we had a game that knew exactly how to push all the right buttons for fans of games such as Castlevania and Ghouls and Ghosts.  DMC still serves as the model for most modern action games to this day and it wouldn’t take long for others to follow, such as Sega’s Gungrave.

Released in the summer of 2002 Gungrave tells the tale of Beyond the Grave, an undead soldier on a mission of revenge.  Once known as Brandon Heat, Beyond the Grave was once part of the organized crime organization Millenion until he was betrayed and killed by his best friend Harry McDowell.  In the ensuing years Harry seized the reigns of Millenion and has overrun the world with his monstrous Deadmen and now Brandon has been revived to stop him.

Gungrave is as simple as it gets.  Shoot everything that moves and move on.  There are no intricate puzzles to mull over, switches to throw, or even items to collect.  This is a game built all around its combat, which it does amazingly well.  Your primary weapons are the dual Cerberus pistols equipped with infinite ammo.  Since they auto target the nearest enemies you can go wild and expect to reasonably hit your targets.  As an added bonus repeated hits of the fire button will produce a stylish twirl that nails every enemy surrounding you.  For melee you can swing the massive coffin strapped to your back to knock back enemies that get too close and can perform various dives to avoid fire.

The game is built around the mechanic of never letting up on the fire button as it builds up beats on the combo meter with every object hit, be it enemies or parts of the environment.  The game provides a generous amount of crap to destroy at every opportunity, from relentless waves of enemies to tons of destructible objects, letting you build up combos in the hundreds so long as there is no break in the action.

Aside from looking good the beats racked up serve additional purposes.  As the combo meter increases you are granted extra demolition shots which can be used to clear the screen or refill health.  Initially you only have one type of shot but more are earned at the end of every level when your performance is tallied up.  There are a number of parameters that are taken into account when calculating your performance such as the time to complete the level, highest combo earned, overall damage taken and whether you’ve used a shot to refill your life.

That last point might seem unfair but in Gungrave’s favor there’s a reason.  Grave is armed with a regenerating shield like Halo, which means the shield must be depleted in order for you to actually take damage.  Functionally you might seem invincible but your life bar drops fast without the shield.  Waiting for the shield to regen carries its own penalties in that whatever combo you’ve accumulated will drop as well as increasing the time taken to complete the level.  In a minor way it forces you to approach each fire fight with a bit of caution to maximize your grade.

The difficulty curve is moderate throughout the game.  The first 3 missions are easy enough that you can recklessly dive into packs of enemies with very little chance of dieing and provide the perfect opportunity to learn the game’s mechanics.  Once you begin to fight the leaders of Millenion it jumps significantly.  The bosses in particular can one shot you but have recognizable patterns you can exploit.

In the end however Gungrave is a short game that can be completed in under two hours.  In combination with the game’s short length there are very few incentives to replay the game.  In spite of the game’s brevity however I found the game to be replayable just on the merits of combat mechanics.  Unlike similar games that become repetitive due to a limited repertoire of moves or enemies the way every encounter in Gungrave is staged leaves room for improvement like many a 16-bit classic.  And with you performance being graded you can see fruits of your efforts.

The combination of Yasuhiro Nightow’s character designs and Kosuke Fujishima’s mechanical designs gives Gungrave a distinct look compared to nearly every other game on the market.  The cel shading enables to the art to transition to 3d flawlessly.  There’s an insane degree of destructibility to the environments and sometimes up to 10-20 enemies on screen at once.  Slowdown does rear its head during the most hectic moments, usually when a demolition shot is used but for the most part this is a smooth ride.  You can see where a few corners were cut to maintain performance as the game has a short draw distance and enemies are less detailed but its handled very well.

The cut scenes use the same 3d assets but at a higher quality and look phenomenal.  Aside from looking cool as hell it’s a stylistic choice that remains consistent with the rest of the game’s look.  Though brief they do an excellent job of telling the back story between Beyond the Grave and Millenion and make me wish to see a game completely rendered in that style.

The only point of contention in the end is whether a short game is something you can handle.  At this point you can find Gungrave for $5-10 bucks and honestly it’s more than worth it at that price.  Outside of the game’s length Gungrave is one of the most solid action games in the PlayStation 2 library.