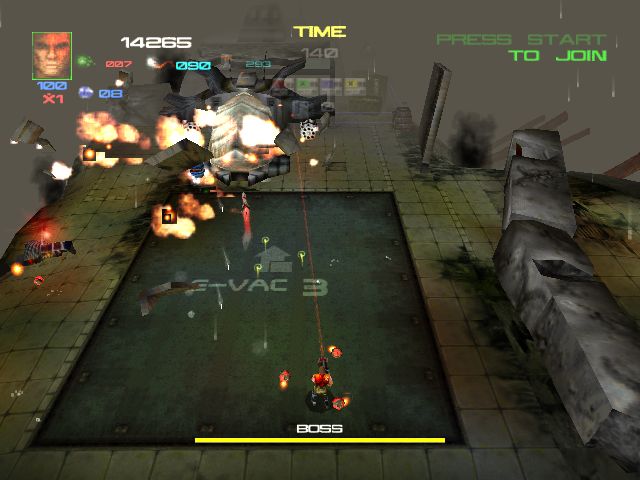 I remember Rage software as a developer who was all style with little substance.  Quick to jump on any new piece of technology chances are if a new console or video card debuted Rage would be there with a shallow game that would at least wow you with its visuals.  The PC game Incoming is just one such example.  When the Dreamcast hit the market its compatibility with Windows CE meant a slew of PC ports were coming with Millennium Soldier Expendable being one of the first.

In the distant future Earth has been conquered by an unnamed alien race.  In order to free humanity scientists begin the Millennium Soldier project, cloning two super humans to face the aliens.  As an added bonus, since these soldiers are clones they can send a near endless parade of them in succession, hence the title Expendable.

Mechanically Expendable is similar to the old PlayStation game Loaded in many ways.  Both games are top down shooters, go overboard with the light source shading, and are as simple as it gets.  As a shooter Expendable does its job well, but as a fun gaming experience it falls flat.  This feels like a 1995 era game that has arrived 5 years late to a party that has already ended.

Designed as an arcade style shooter there is rarely a moment in Expendable where something isn’t blowing up.  Whether it’s the aliens, barrels, hell even the random hostages caught in the crossover, everything explodes into nice little chunks.  There are a total of 10 different weapons available and you can store 5 to switch between at will.  Weapon drops are so frequent that you’ll almost forget about the standard machine gun and with large chunks of the environment being destructible you’ll never be at a loss for extra firepower.

While you might want to make a mad dash for every weapon that drops showing a little restraint does have its rewards.  You can power-up certain weapons up to three levels which almost becomes mandatory the deeper you progress because of the often strict time limit.  Of course all bets are off if you’re playing in coop but some form of cooperation should be established as the seven credits are shared between both players.

Expendable was released before the era of the almighty twin stick shooter so it has to make do with the Dreamcast’s single analog stick and is serviceable at best.  Since you can’t move and aim separately the strafe button is forced to compensate and is only a marginal band aid. The enemies attack in large enough numbers that locking yourself into one direction isn’t advisable and you are forced to take many unnecessary hits.

The control issues however are the least of Expendable’s problems.  In spite of the non-stop action the game is flat out boring.  Each level is simply a mad dash to the end where you’ll face a bullet sponge boss before moving on.  Occasionally you’ll have to find pass cards to unlock laser gates but “find” isn’t the appropriate term considering they’re usually a few feet away.  Killing the same repetitive androids and mutants grows old in short order and at 20 levels I doubt anyone will find the experience compelling enough to bother slogging through it that long.

The most impressive aspect of Expendable would have to be the graphics, the lighting in particular.  Remember the early years of the PlayStation, where it seemed every game tried to one up the previous with how crazy the lighting effects would get?  Now imagine that on steroids.  The light source shading and particular effects are truly a sight to behold when the screen erupts in a shower of explosions and body parts.  For its time the textures in Expendable were incredible and despite over a decade are still pretty at times.  The modeling of the enemies isn’t on the same level however and looks like a high resolution PlayStation game.

Speaking of PlayStation, the PS One version of the game is a missed opportunity.  Obviously the graphical fidelity is lower but considering the hardware it’s still something of a technical marvel.  Rather than utilize both analog sticks on the dual shock controller this version adapts Resident Evil style tank controls which is borderline retarded for a full on action game such as this.   My hatred of tank controls is legendary at this point so I’ll only say that if you are one of the nut bags who like that style of play this version might work out better than the Dreamcast game.

Expendable tries to be the 3d equivalent of Contra and Gunstar Heroes but falls short in its execution.  If the controls weren’t so cumbersome it might be possible to overlook the repetitive gameplay.  As it stands this is simply a forgettable action game that is better left in the past.