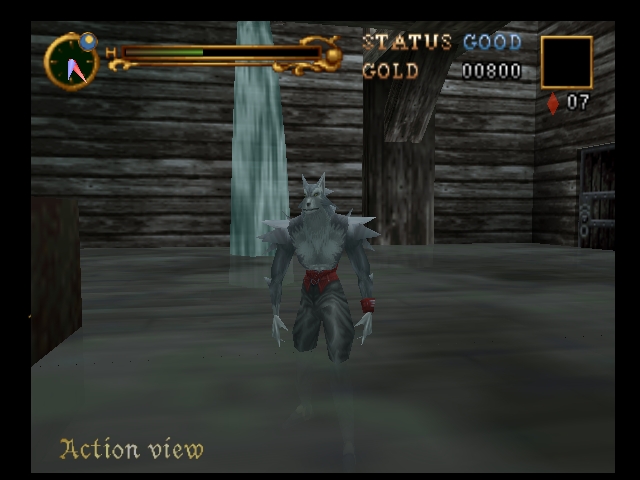 Konami had lofty plans for Castlevania 64, setting out to create one of the most ambitious 3d adventures of the time.  However between their developmental inexperience and the reality of the monster they were trying to create Castlevania 64’s initial release was a scaled back version of what they originally planned.  Less than a year later they would return with Castlevania: Legacy of Darkness their original vision fully realized.  Despite more content it can’t be helped that this feels more of an expansion pack than a fully realized sequel.

Cornell has spent the last few years training to control the beast inside himself and is unaware of the attack on his home village by Dracula’s minions.  Upon seeing the massacre he also learns that his sister Ada is to be used as a sacrifice to resurrect Dracula and sets out to save her.

Legacy of Darkness is literally composed of the leftover assets and art created during Castlevania 64’s development.  Art for both Cornell and Henry were both shown as well as different outfits for Reinhardt and Carrie.  They’ve managed to make sense of all this material by setting the game up as a prequel.  Despite its status as the complete version of what the designers intended Legacy of Darkness still suffers from many of the same issues as the first game and as such is not for everyone.

As a protagonist Cornell rests between Reinhardt and Carrie power wise.  His primary attack is a long range projectile that will automatically lock onto the nearest target.  The close range claw swipe is weak and more or less useless.  Speaking of useless although he has access to the same sub weapons as Reinhardt they are completely unnecessary.  The projectile attack is so strong and more convenient that they aren’t needed.  You’re better off saving red jewels for his Werewolf form, which boosts attack power but consumes gems with no way to turn it off.

While Cornell’s story is new he trends most of the same ground as the two prior protagonists.  Although the general level may be the same his path is different, with its own unique enemies and cut scenes.  Most of your time will be spent killing enemies and flipping switches to progress through each chapter.  There’s less of a focus on timed events this time around, which might be a boon to those that hated it.

Although Cornell is the main focus of the game his quest unlocks the other characters and also has story ties to the others.  Henry is only a child when Cornell escorts him out of the mansion.  Years later he returns as an adult in a mission to save other lost children from the same fate that he nearly encountered.  While his quest is an interesting diversion it’s also short and not as fully fleshed out.

Both Carrie and Reinhardt’s stories are also available but in altered form.  Obviously it would have been too expensive to include both of their original level layouts so they recycle Cornells. The new bosses included are also reused as well which at least makes them feel new.  But you have to take the good with the bad, in this case all of the voice acting and almost all of their cut scenes are gone. I suppose we should be grateful that Konami even bothered to include them at all, albeit in an abridged form.

Legacy of Darkness is certainly not light on content with 4 (more like 3.5) quests, alternate costumes and multiple endings.  But the one area Konami really needed to overhaul remains unchanged, and that is the camera.  The atrocious camera from Castlevania 64 returns and is just as infuriating as before.  For the amount of platforming this game has its unforgivable that the game shipped with a camera system so bad.  We might have been able to slightly overlook it the first time they get no grace period this time around.  The annoying camera is bad enough that it severely detracts the enjoyment of the rest of the game.

For the most part Legacy of Darkness looks identical to the first game.  Around 75% of the assets are recycled.  The new levels and monsters are a breath of fresh air and some of the special effects have been spruced up but not to the point you would notice.  Expansion pack support has been added for a high resolution mode that is ultimately pointless.  The dip in frame rate is so large that the game is near unplayable and certainly not worth it for slightly sharper textures and draw distance.  I can appreciate the gesture but not the results.

If Castlevania 64 did not exist I might look back on Legacy of Darkness more fondly.  There are some good ideas buried underneath shoddy execution and while the thought of a feature rich package such as this is enticing it frankly cannot rise above its myriad issues.