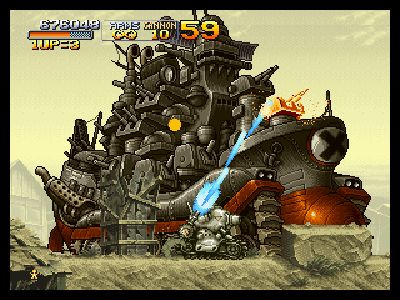 For any Neo Geo fan during the mid-90s unless you absolutely loved fighting games there was little else to spend your money on.  Dear God SNK must have had a third world country’s worth of artists and programmers to pump those games out at such a record pace.  If you liked action games you had little choice but to look at SNES and Genesis fans with envy. Trust me Cyber Lip and Magician Lord were not adequate substitutes for Contra III and Gunstar Heroes.

All that changed with the introduction of the Metal Slug series.  With a level of intensity those consoles could only dream of and an unmatched art style there’s been very little like it since.  A sequel was a foregone conclusion after the original’s success and while Metal Slug 2 was a fine game in its own right it was flawed.  Metal Slug X was a massive revision that fixed most of those flaws, leaving a far stronger game in its wake.

General Morden has returned with a renewed army and commitment to taking over the world. So committed in fact that he has teamed up with Martians to ensure the Peregrine Falcon squad will not stop him again.  The Peregrines have some reinforcements of their own with two new member added to their ranks.

The story of Metal Slug is largely inconsequential due to the “everything and the kitchen sink” design of the game.  Although the primary antagonists are vaguely Nazis the game is not afraid to make diversions and pit you against mummies inside a pyramid or even aliens.  If it makes for a more interesting journey and gameplay the designers didn’t shy away from it.  More importantly though is that it all works and never seems out of place.

The basics of Metal Slug should be familiar to anyone who has a played an action game since, well forever. You are armed with a machine gun with infinite ammo and a knife for close quarters combat.  There are legions of weapons dropped by hostages freed throughout each level, from a heavy machine gun, flamethrower, rocket launcher, laser, and so on.  In addition you have a limited number of grenades that are chucked overhand for heavily armored troops.

Every level has hostages that drop any number of items once rescued, weapons, items, or food.  If you’re lucky you’ll save Hyakutaro Ichimonji, who will follow you for a set period throwing heat seeking hadokens (I’m not making that up) or roundhouse kicks for CQC.  Food has a secondary purpose aside from points this time around.  Eating too much will turn you into a lard ass that moves slower but has vastly upgraded versions of every weapon.  It’s both hilarious and a boon at the same time; rather than a knife you’ll actually stab enemies with a fork or slap them with your belt if crouching.

The various vehicles of the first game make a comeback and are joined by Camel Slug, Slug Flyer, and Slugnoid.  The Camel slug is more or less self-explanatory; a camel with Vulcan cannon strapped to its sides.  The added firepower is nice but you are still exposed. The Slug Flyer is rarely seen but extremely powerful, with its surface to air missiles and Vulcan cannon.  The Slugnoid is used on only two occasions to battle bosses that attack from below but is a welcome addition to the game.

If all this firepower sounds overwhelming trust me it’s not.  Despite lasting a scant six missions Metal Slug X will give your gaming skills a thorough workout.  There are very few moments where something is not blowing up or the screen isn’t overrun with soldiers.  Very few games, 2d or 3d, can match the intensity of even one level of a Metal Slug game.  The screen is constantly awash in explosions and massive battle tanks; if you go longer than 10 seconds without something blowing up your doing it wrong.

There’s a great deal of variety throughout the game, notably missions 2 and five.  Mission 2 is set within an Egyptian pyramid, replete with undead mummies, dogs, and bats.  It all comes across as standard than takes a trip into bizarre when you are unexpectedly turned into a mummy.  Normally this would be a setback but you are invincible so long as it doesn’t happen again.  It’s a nice diversion and shows that the designers are having just as much fun making the game as you are playing it.

The one fault I have with the game is that it is too manic for its own good.  Between the hail of bullets, onslaught of soldiers, and whatever other mechanical contraption the game will throw in your path it’s easy to get lost and die foolishly.  In fact its guaranteed to happen far more than you would like.  There are infinite continues and it almost seems as though the game was designed with that in mind. I feel a slightly less frantic gameplay environment would have done wonders for the game’s pacing.  I know it’s the game’s job to kill me but it could be less transparent about it.

We’re unlikely to ever see this level of 2d hand drawn art in a game ever again which makes the Metal Slug series so special.  The amount of animation in literally every single frame is simply unheard of.  Everything explodes or collapses in a beautiful mess that never gets old.  The level of animation lavished on each of the individual main characters is staggering and the enemies are nearly on the same level.  You could play through each mission well over a dozen times and still notice some minor detail that escaped your eye the previous time.  There is some animation loss from the arcade which is to be expected but Metal Slug X looks better than it has any right to on the PlayStation.

The Metal Slug series were some of the best side scrolling action games ever created and Metal Slug X was one of the series’ high points before they ran the formula into the ground.  Whether you buy it individually or as part of the Metal Slug Anthology you’re in for the ride of your life.