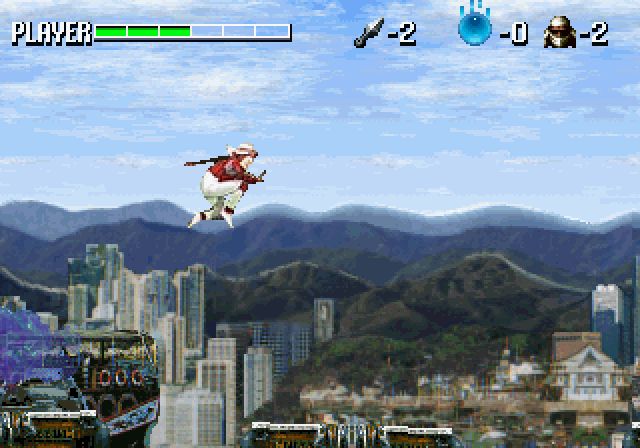 Coming off the heels of Shinobi III Sega basically could do no wrong when it came to the ninja action genre.  They OWNED that shit.  After creating what could be viewed as the quintessential action game of the 16-bit era they had a tall order on their hands in terms of one upping themselves.  Just how do you follow up a game that good?  With the 32X and Saturn on the horizon there were many options on the table but it’s safe to say no one expected them to go the digitized route in creating Shinobi Legions.

Kazuma, Sho, and Aya are three adopted students raised as siblings and trained in ninjitsu.  When Kazuma becomes power hungry and leaves Sho and Aya remain and learn the ultimate technique of their art.  Years later Kazuma returns with an army and kidnaps Aya in a bid to learn the secrets from his adopted relatives.

Why Sega of Japan went with digitized sprites in their first and only Saturn outing for the franchise will forever remain a mystery.  I suppose they wanted to show off the system’s strengths but could have done a better job with hand drawn art.  This was 1995 and while Mortal Kombat and digitized graphics were still en vogue the procession of terrible FMV games that killed the Sega CD in the US still lingered, so much so that Sega of America passed on releasing this.  I suppose one man’s trash is another man’s treasure and Vik Tokai would pick it up but I question whether they should have bothered.

While it might seem similar to Shinobi III on the surface the gameplay focus has shifted to sword play rather than the heavy shuriken tossing of prior games.  Now that the sword has its own individual button it opens up a number of new gameplay possibilities.  You can reflect projectiles with the right timing and there are a number of sword techniques to break up the monotony of melee combat.  Shuriken are almost completely useless since they are weak and in rare supply.

The melee heavy gameplay would actually work if the game didn’t feel so slow.  There’s a sense of clumsiness to Sho’s movements and the game in general lacks the responsiveness established by prior games.  While the katana techniques try to add variety they don’t make up for the elements that were scrapped; the 4 or 5 ninjitsu spells have been paired down to one and the POW item that massively boosted your attack power is replaced with a Bushido Blade, which oddly creates shadowy Buddha statues when swung.

Any of this seem familiar?

The level design frankly is poor and comes across as pandering to longtime series fans, especially the later ones that are call backs to Revenge of Shinobi and Shinobi III.  Most levels drag on longer than they should and don’t have the assets necessary to pull it off, resulting in the same background elements being recycled three to 4 times in succession.  You’ll cover a lot of familiar territory such as a forest, bio lab, ancient Japanese temples but they look a bit silly and dated due to the digitized graphics.

The graphics never seem to come together as a cohesive whole.  The digitized actors might look impressive but animate like puppets on a string.  The costumes certainly don’t help either and come across as cheap.  The enemies in general are a disappointment; the human opponents are passable but anytime the designers throw in supernatural elements that don’t exist the dichotomy is instantly noticeable.  The dinosaur in the bio lab and the demon that follows are prime examples of elements that don’t gel.

I will say the backgrounds have their moments and are the best parts of the overall visual package.  There are a few genuine points where you’ll stop and marvel at their photo realism despite the low resolution.  The digital process had only been used on sprites for the most part to this point so seeing another implementation of the technology was welcome even if it was short lived.

The cut scenes more than anything else are the most egregious misstep.  The production values are below TV standards with bad costumes and fight choreography abounds.  It’s on the same level as an old episode of Power Rangers just to give you an idea.  The dialogue was left untouched and is subtitled which for a game released in 1995 was a ballsy move.  I don’t speak Japanese so I won’t comment on the acting but considering the rest of the package I’ll err on the side of caution and say is bad.

Shinobi Legions isn’t a completely bad game but comes across as sloppy.  Had the gameplay been tightened than the issues with the presentation could be overlooked but as is this is a case of a good ideas executed wrong.