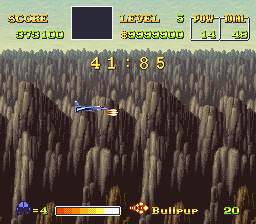 There sure were a lot of shooters in the first year of the SNES’ life.  I realize it was the hot genre at the time but even taking that into consideration, god damn.  Most publishers would eventually back off when faced with the system’s slow processor but there were quite a few gems released in that early time frame.  Capcom’s U.N. Squadron was one such release and despite its age stands as one of the best shmups for the console.

Based on the manga and anime series Area 88, this franchise has a bit of a storied history in the US.  Area 88 was among the first manga translated in the US, but not the whole series.  It was later adapted into a 3-episode OVA and a longer 12 episode animated series, all of which saw a release in America.  Honestly I don’t know why they changed the name; the UN has nothing to do with the game and the name Area 88 sums it up perfectly but whatever.  While it might have seemed odd to bring over a game based on a little known property to us dirty Americans Capcom knew what they were doing.

Originally released in the arcade U.N. Squadron follows the exploits of a mercenary group in the fictional Area 88 as they battle the nation of Aslan in dogfights that span the globe.  While the arcade game was good Capcom went above and beyond the call of duty to infuse the SNES version with a ton of extra options and features.  Despite lacking the production values of later shooters U.N. Squadron earns its place in the upper echelons of the shooter pantheon with its excellent gameplay.

The characters available feature stark differences that will affect the game in a variety of ways.  Shin is most balanced in that his weapons level up faster but only fire forward.  Mickey Simon can continue to fire his normal weapon and use specials at the same time.  Greg recovers from damage twice as fast, making him more resilient.  On its face it sounds straightforward but the end game needs to be considered.  Although Shin will power up quickest he plateaus early, meaning he is a much harder choice for later stages.  Greg’s recovery time is a massive boon when under heavy fire since player health is handled differently here.

Although you have a life bar its function isn’t what you expect.  Any hit will place you in critical status; another hit will destroy you.  If you can avoid damage the plane will recover at the cost of some life.  Eventually you will linger in critical status permanently, with death a single shot away.  It’s the perfect system as it offers novice players the challenge they crave while providing beginners with a safety net in case of failure.

After the initial stage the map opens up and provides you with anywhere between 3-6 levels you can complete at any time.   The level variety is U.N. Squadron’s strongest asset.  For the most part each stage will end in a boss battle but the obstacles you face along the way and even some of the objectives are different.  Some levels will pit you against ground targets exclusively or take place in the sky as you face off against mercenary squads much like your own.  The bonus Quartermaster corps levels will task you with destroying enemy targets in bombing runs with a strict time limit.  U.N. Squadron is a long game that becomes exceedingly harder as you progress, making your choice of pilot and ships all the more important.

Between levels you can use the money earned to buy new ships and sub weapons.  You start out with the well rounded Crusader but with enough time buy 5 more, with each specializing in specific categories.  The F-20 Tigershark isn’t all that different from the Crusader but has access to more weapons.  The Thunderbolt II is designed for ground attacks, with its normal weapon firing an additional shot at the ground and its extra special weapons based on that premise.   The F-14 Tomcat is a strictly air affair, with no ground weapons and the best maneuverability.  These designations play a role as you are clued in as to what to expect at the beginning of each stage.   Each plane can only equip a certain amount of special weapons and is also limited as to which ones they have access to.  If all else fails you could always buy the F-200 Efreet, the jack of all trades with no limitations but chances are you’ll never have that much cash, pointing to one of the game’s biggest problems.

Although its somewhat balanced the difficulty curve is pretty steep.  Later missions are designed around specific ships and unfortunately they’re all expensive.  Get used to the Crusader; you’ll be using it for almost half of the game.  The opportunities to earn more money in the Quartermaster Corps are limited and even if completed only nets you $20000.  With each plane ranging in the $300,000-$1000000 range you’ll have to be a scrooge to net the best upgrades.  Choosing a plane ill-suited to a given level is disastrous but at least you can switch if you die.  But it’s a steep price to pay if you simply didn’t have the money to buy the necessary plane first.  This imbalance rears its ugly head on the second to last level, where the boss’s weak point can only be hit by specific weapons exclusive to two ships.  Of course if you’ve never played U.N. Squadron before this realization is tragic.

Ultimately though it doesn’t ruin the game but does knock it down a point.  Despite its release in the early days of the SNES U.N. Squadron maintained its position as one of the system’s best shooters through its quality.  SNES fans looking for a quality shmup might have slim pickings but U.N. Squadron is near the top of that list.