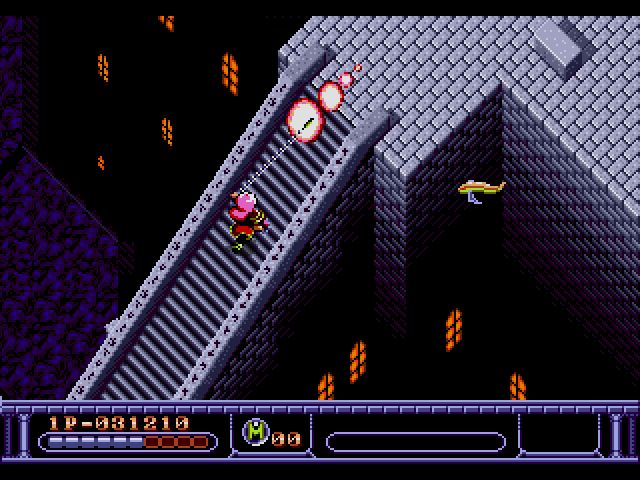 How many of you played the original Gauntlet in the arcade?  There was something compelling about exploring a horde of dungeons with a couple of friends using traditional fantasy archetypes.  But for all of its success as a multiplayer game it did get repetitive, especially considering there were 100 levels to complete.  Arcus Odyssey follows along the same lines but is a deeper game with a definitive quest and goal.  While it could be labeled a clone, which it is to an extent, it’s a much better game than Gauntlet overall.

Long ago the sorceress Castomira attempted to remake the world in her image, beginning a long reign of chaos.  The princess Leaty was the only one strong enough to oppose her and after a battle that lasted for days finally banished her to the Dark World.  Foreseeing her return one day Leaty forged a magic blade that could destroy her and left in the hands of the King of Arcus.

Now 1000 years later that day is now.  Followers of Castomira have stolen the sword and the task of stopping Castomira’s resurrection and saving Arcus rests on the shoulders of 4 warriors.  The intro was extremely lavish for the time and did an excellent job of setting up the story.  Unfortunately for all of its excesses the story is the weakest point of the game, partly due to the weak localization but mostly because it isn’t really brought up much during the game.  I realize that Arcus Odyssey is an overhead action RPG first and foremost but the intro cinematic almost promises an epic tale that is never delivered in game.

At first glance Arcus Odyssey resembles Gauntlet but the two share few traits.  You have a choice between 4 characters, Jedda, the swordsman; Erin, the warrior-maiden; Diane, the elf archer; and Bead, the wizard.  Yeah those character classes are a little too close to Gauntlet for my taste.  While their overall “class” is the same each differs in more than just basic stats.  Each has different standard attacks and spells.

Your choice of character will definitely have a major impact on your experience with the game.  Someone like Jedda has a relatively short attack range that is powerful.  Diane’s arrows are weak but can be rebounded off walls, an extremely effective technique to deal with enemies long before they can see you.  My personal favorite is Erin; her whip not only has long range but can be spun in a wide circle that hits enemies on every elevation as well.  There is no wrong choice obviously but you’ll have  a much easier time with Erin than Jedda, that’s for sure.

Arcus Odyssey is broken up into 8 chapters of varying lengths that mostly boil down to finding the exit to advance.  Reaching it is an entirely different story however.  There are many light puzzles that need to be solved, nothing more complicated than finding the correct items to unlock a door or free captive NPCs that will also perform the same function.  Speaking of NPCs there are many who will also fight alongside you for extended periods of time, bringing extra welcome firepower that is more than welcome.  If you’re playing in coop it makes the game even easier considering there are 3 of you mowing down enemies left and right.

In spite of all this firepower Arcus Odyssey can be tough at times.  Enemies respawn not too long after you’ve left an area and there are tons of them crowding limited areas at times.  As the chapters progress they become longer and more maze-like in scope which makes the absence of a map or compass frustrating at times.  Depending on the character selected your life bar might be shorter than normal and can lead to some quick deaths.  Although there are infinite continues and passwords you’ll have to start over from the beginning of an area which can be demoralizing.

The production values are mixed.  The darker color palette is well suited to the Genesis but some of the color choices in the levels are pretty garish.  The animation is pretty decent but aside from the bosses most of the sprites are average.  I will say that for a top down game of that era Arcus Odyssey has more visual variety than similar games of its ilk.  While the graphics are decent the music is excellent, once again provided by Wolfteam/Renovation mainstay Motoi Sakuraba.

These points of contention aren’t enough to ruin the game however.  Even now Arcus Odyssey is an enjoyable experience can be viewed as a retro throwback to the many isometric RPGS being released today.  Either single player or coop Arcus Odyssey has enough juice in the tank to occupy quite a few hours of your time.