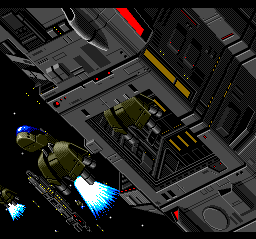 For the longest time it’s always been assumed that the video game market cannot support 3 platforms at the same time.  And for a large part of the industry’s history this has been true.  It wasn’t until the sixth generation that we saw the PS2, GameCube, and X-Box coexist for the most part.  Prior to this the Saturn was the third wheel that was shaken out, and even before that the Turbo Grafx-16 never found its audience in the US.  While it didn’t have the library with the breadth and depth of Sega and Nintendo there were many gems most gamers never experienced with Gate of Thunder counted in that number.

As the premier pack-in game for the Turbo Duo Gate of Thunder had to impress immediately and it does so in spectacular fashion.  The long animated intro has no text or voice acting but manages to convey the game’s plot pretty thoroughly through static images.  In truth outside of the rare cut scenes and soundtrack Gate of Thunder might have been possible without the CD add-on but here it is and better for it.

With the only launch/pack-in titles being repackaged Hu-Card games on the same disc Gate of Thunder stood out as a prime example of what was possible with this “new” console and is one of its best games.  That’s high praise considering the sheer number of shmups available for the system but is well earned through the game’s quality.

The arsenal of weapons is actually pretty small compared to most of its shooter contemporaries. You begin with the default laser but can also collect the wave beam and explosive shot.  Rather than sacrificing one for the other you can stockpile and switch between the three at any time.  Once a weapon is collected your ship is outfitted with two satellites that mirror your fire but can also conveniently be aimed backwards.  Missiles are also available but are more or less forgettable.

While they may seem typical each weapon has its own quirks and secondary uses.  Weapons can be leveled up three times at which point they become monstrous screen clearing death dealers.  The laser passes through enemies and walls while dealing damage, the wave beam is weaker but covers a wider spread (at full power nearly the entire screen!) and the explosive shot will track enemies and deal additional damage after blowing up.  It isn’t mandatory that you switch as the situation dictates but it’ll definitely go a long way toward keeping you alive.

And that’s because Gate of Thunder is probably one of the most intense shooters you’ll ever play, which says a lot considering the genre.  This isn’t a bullet hell shmup although at times it comes close; most of the opposition are composed of heavily armed battleships and other metallic contraptions that litter the screen.  It’s impressive how much shit is thrown at you at once with nary a hint of slowdown.  As if the constant deluge of bullets and enemies isn’t enough there are also environmental hazards that come into play.  Spewing lava, falling rocks, and even 3d objects shifting in from the background, the designers at Red and Hudson Soft have certainly done their best to deter you from seeing the end of the game. In many ways Gate of Thunder is heavily influenced/by the Thunderforce series.

If there is any one “flaw” you can point to is that the game is short and about average in difficulty.  The learning curve is balanced near perfectly so that even a novice shmup player can jump in and make progress and the game never becomes so frustrating that it feels like its cheating.  With 7 continues and extra lives hidden throughout the levels the seven levels won’t last longer than an afternoon before you see the credits.  To me the game is so good that it’s replayable but I realize that isn’t the case with everyone.

Graphically Gate of Thunder is solid.  The scrolling backgrounds are often 4-5 layers deep with various moving parts giving off the illusion of a world that’s alive.  The mechanical designs of the enemies are also well done but as a whole there are Hu-Card games that approach this level of detail.  Where the game truly shines is in the sound department.  The hard rock soundtrack is absolutely amazing and rich in its depth and variety.  The sound effects as well are hard hitting and full of bass; this is definitely one that benefits from a good sound setup.  It’s obvious that the majority of the CD’s potential toward the sound and the game benefits from it.

This is one of the strongest shooters in the TG-16 library and one that can be easily played today through the Wii’s virtual console or PSN.  Very few shooters stand the test of time as well as Gate of Thunder so there’s no reason not to go back and experience a piece of gaming history.