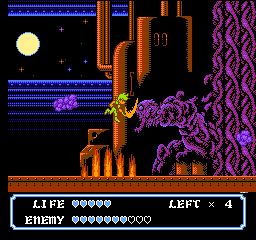 Even on a console as awesome as the NES there were still many games that fell through the cracks or never saw US shores.  For the most part we did receive most of the absolute cream of the crop but there are some glaring omissions.  I still question why Konami left Parodius, Wai Wai World 2 and Gradius 2 in Japan just as an example.  There were a large number of gems we never got to play, most of which have been fan translated.  One of these is Moon Crystal, one of the best pure action games on the system.

Ricky Slater is shown the Moon Crystal by his father Dr. Slater.  The Moon Crystal holds a sleeping power that is active only during a full moon.  Unfortunately Count Crimson needs the Moon Crystal to power his Lunasystem to bring the dead back to life and kidnaps Dr. Slater to help him complete the machine.  Now Ricky, with the help of the mysterious Rosina must rescue his father and stop the Count.

Once slated for a US release by DTMC (I guess Dr. Franken was more interesting eh?) Moon Crystal was regrettably canceled.  There were a host of Famicom games slated for US release such as Chaos War, Villigust, and Radia Senki that never surfaced, more than likely due to the impending Super NES launch.  Like most of those games Moon Crystal was a phenomenal game that would have fit in with the rest of the ultra-polished games of that late era.  With perhaps the most advanced animation of any game on the system it’s actually even better than many of those lauded classics.

You’ll find the DNA of several other NES classics embedded in Moon Crystal.  Combine the cut scenes of Ninja Gaiden with Mario’s platforming and add Prince of Persia’s measured animation and you’ll start to have an idea of Moon Crystal’s gameplay.  The animation in particular is the most striking aspect of the game.  While games like Prince of Persia had made strides in this department in practice it was unwieldy.  Here it’s been tempered enough that you can make quick turns and the like without waiting for an animation cycle to stop.  There is still a slight delay in responsiveness but not enough that it ever becomes a major issue.

There are little in the way of power-ups, with the items consisting of a dagger that extends your attack range, winged boots for a handy double jump, a bell for invincibility and various items to restore or extend your life bar.  It works within the confines of the game as the game is perfectly balanced for the most part.  Initially the dagger is found immediately but with each level you’ll have to make do without it for longer stretches.   Those that love to search every nook and cranny of a level will find plenty of hidden secrets and won’t have to worry about a low life bar for long.  Outside of the last level there is no time limit, leaving you free to explore to your heart’s content.

Most of the focus is placed on the platforming, a facet in which the game excels.   Thanks to the ability to grab onto and shimmy up any surface the designers are able to create some fiendishly clever platform arrangements and leave you to figure out how the hell to navigate them.

The level design is superb and takes full advantage of the ability to climb up surfaces; there are many secrets or alternate routes through levels available if you’re willing to think outside the box and notice ledges with a little bit of space to stand.  Whenever a particularly troublesome segment is coming there are winged boots nearby to help out.  Not that it makes it easier, which would be too simple.  Enemy placement can be just as devious as the Ghouls n’ Ghosts series and there are a few head scratching moments in the levels.

While the game is finely tuned overall there is a significant difficulty spike in the last two stages.  Count Crimson’s lab requires near perfect execution if you want to reach the boss (es) with enough life to survive.  Regardless of how skilled you are trying to beat the final bosses with one 5 hit life bar (ideally) is asking a bit much and borders on near impossible.  The Ninja Gaiden comparison runs a bit too closely in this regard if you ask me.

Beyond the animation the graphics are excellently detailed.  There is some use of parallax scrolling, mostly used for the skyline but it’s still a pretty cool effect in motion.  The standard enemies exhibit nearly the same level of animation granted to Ricky and it’s distracting to watch at times.  The cut scenes never run too long, conveying the necessary information and moving the story along.  The only lackluster element of the presentation would be the music, which is unobtrusive but forgettable.

Had Moon Crystal been released in the US it would easily reside alongside the best action games on the platform.  Fan translator AWJ has released a patch that localizes the entire game but unless you absolutely need to know the plot this is playable completely in Japanese.  Either way don’t miss one of the best action games for the system.