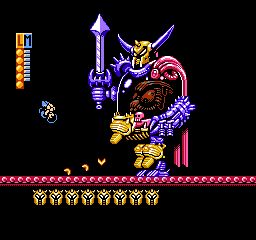 1991-92 were truly epic years in the NES’s life.  At that point the hardware had been on the market for 6 years in the US (8 in Japan) meaning developers were squeezing every last drop of power the little grey box could muster.  Some true classics were released in that time frame such as Super Mario Brothers 3, Battletoads, and Batman: Revenge of the Joker, etc.  But just as many flew under the radar; Little Samson ring a bell?  One such release that vied for that spot but fell short was Totally Rad, a late Jaleco release that suffers from a lack of polish.

Jake is a magician in training, apprenticed to the great Zebediah Pong.  His training is interrupted when creatures from the Underworld kidnap his girlfriend Allison in a ploy to lure her father out of hiding.  Totally uncool.  Now Jake has to set out to rescue his bodacious babe from the bad guys.

If you’re wondering why I’m using slang so drastically out of date most don’t remember it, well that’s because the game is riddled with it.  When most games were localized back then they were usually done so faithfully.  There were a few cases where certain liberties were taken, usually by Konami but that stuff was relegated to the instruction manuals.

Someone at Jaleco thought they were being creative by injecting tired 80s surf lingo in the game and it suffers as a result.  I grew up in the north east so my only exposure to that crap came from Ninja Turtles and the Beverly Hills Teens cartoon.  Even with my limited knowledge of surf talk I could tell you that by 1991 it was outdated.  Whatever clever attempt at a story they were trying to achieve falls flat as a result.

Ignore the cut scenes and you are left with a game that certainly looks like it could rub shoulders with the likes of Castlevania and Shatterhand.  Unfortunately Totally Rad lacks that master stroke that comes from an expert game designer.  What you are left with is a solid game that is badly balanced and at times feels straight up broken.

There are no power-ups in Totally Rad; in fact you have everything you need to complete the game from the outset.  There are a host of spells, 12 altogether that cover all the bases.  There are two healing spells, invincibility, freezing time, 4 elemental spells and 3 different forms you can assume.  Jake’s only offensive “weapon” is a magical burst that can be charged up for more power.  You only have one magic meter that isn’t replenished  until the next level so conservative use is key.

For the most part the level design is overly simplistic at times.  There are five Acts with 2 stages each.  Usually the first is a simple left to right jaunt while the second half seems to come straight from hell.  The levels themselves don’t see to be the focus, rather the enemies.  Enemy placement is carefully measured, forcing you to think carefully about how to proceed lest you take unnecessary hits you can’t afford.

Which speaks to a larger problem with Totally Rad.  As a whole the game is unbalanced.  Even as early as the first act there are enemies that can remove nearly half your life bar in one fell stroke.  Magic is in short supply and while it’s tempting to want to experiment with your abilities the fact that you’ll need to keep some in reserve for healing completely works against it.  As later levels drag on the lack of power-ups and the effect on the game’s challenge becomes evident.  At most you can cast 3 or 4 spells before your magic is depleted.

Flaws like these are the type that are stamped out toward the end of development and are noticeable in a game releasing this late in the console’s life cycle.  You might have been able to overlook them completely but with games like Castlevania III and Mega Man IV as competition you might just reconsider a purchase.  That’s the kind of market Totally Rad faced.

While the gameplay came up short the presentation doesn’t.  In this regard Totally Rad is on equal footing with some of the best the NES has to offer.  Parallax scrolling is used pretty extensively, sometimes 3-4 levels deep.  Beyond the level of detail in the backgrounds are the massive bosses.  These giant monstrosities take up nearly a third of the screen, an impressive feat.

Despite the quality of the art I do question the color choices used throughout the game.  Lots of purples and greens mixed together combine to create some truly gaudy looking backdrops.  There are cut scenes in between levels that look nice but are extremely repetitive; Tecmo had nothing to fear.  Localization aside at least they tried.

While I wouldn’t go so far as to say Totally Rad is exactly that it’s at least entertaining.  Had the development team gone over the game and tightened up certain elements this would easily have been an excellent action platformer.  As it is it will have to settle for solid status.