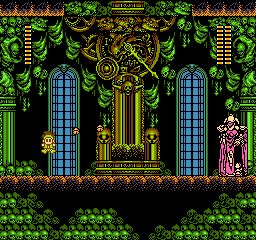 I really miss Taito.  While they never quite achieved the level of acclaim as Capcom & Konami they were a lot like Natsume in that they still released many kick ass action games that were just as good if not better than their competition.  Games like Power Blade and Kickmaster were some of the best action games you never heard of (although they did release Wrath of the Black Manta, man fuck that game).  With this track record it comes as no surprise that they created one of the best action games of all time for the NES, Little Samson.

Ta-Keed, the Prince of Darkness has managed to break the seal of his prison and has returned to wreak havoc on the kingdom.  Emperor Hans summons the 4 heroes of the kingdom to unite and rid the land of Ta-Keed once and for all.

Little Samson was released in late 1992 like other “lost” NES classics such as Bucky O’Hare, Kickmaster, and Vice: Project Doom.  With the 16-bit war in full swing and classic after classic being released the good old NES could not remain in the spotlight any longer.  Which is a shame as the games released in 91-92 represented nearly 10 years of 8-bit refinement and were some of the best pure platformers around.  Little Samson could be seen as Taito’s 8-bit magnum opus with stellar graphics, near perfect level design and a suitably long quest to give you your money’s worth.

Little Samson starts out with 4 introductory levels that serve as a tutorial for each character and can be completed in any order.  Samson as the default hero is reasonably powerful, jumps the highest, and can cling to any surface and climb walls.  Gamm the Golem has the highest attack power but moves the slowest.  Due to his rocky body he suffers the least damage when hit and can walk on spikes.  Plus he will have the longest life bar given time.  K.O. the Mouse is the fastest and can squeeze into tight passages and climb walls like Samson.  Kikira the Dragon can fly for brief periods and does not slide on ice due to her claws.  She can also charge her fireballs for added damage.

While the initial levels are tailored for each character once you’ve reached Ta-Keed’s castle the true quest begins.  With all 4 heroes united the game takes on a TMNT tone since you can switch at any time.  Each character has a separate life bar but does share the same pool of lives; so long as you change you’ll never lose one.

It’s in the second half of the game that the excellent level design truly comes to life.  Every level will at some point call upon a particular character’s abilities and hopefully you’ve learned their minutiae.  KO might be able to crawl into small spaces but his attack is weak and takes seconds to set up, for instance.  Kikira is the only one that can tackle the flying bits but careful attention has to be paid to her arcing fireballs lest you get hit and fall.  In many ways this combines the best bits of Mega Man and Castlevania into one spectacular 8-bit package.

While it’s tempting to pick one dude and stick with them it does behoove you to share power-ups. Although each character’s life bar is different you can collect items to extend them to varying lengths.  You never know when change is in order during a boss battle and any advantage helps.  Oddly enough the password system doesn’t record any items collected so you essentially have to start from square one again.

Despite the game running through the standard platforming tropes it never gets old since you have 4 differently equipped characters to use.  There are usually multiple paths through each level so you aren’t necessarily locked in to one hero.  Most importantly the game manages to keep up the insane degree of variety right up until the end of the quest.  At over twenty levels this is a lengthy quest and combined with the different routes has much replay value.

The difficulty is tuned perfectly and never feels unfair; if you die it’s your own fault.  The levels have been designed in such a way that you can tackle any given situation with more than one party member even if one seems the most optimal.  The late game bosses frequently change form and battle tactics and to really walk away unscathed you’ll have to switch.  Some of these battles shame similar encounters in other games, such as the Dragon atop the Volcano; Mega Man 2 eat your heart out!

As a late generation title Little Samson represents the absolute best of what is possible on the NES.  Very few games of that era can match the level of detail poured into every background and sprite of this game.  The amount of animation in the sprites is nearly unmatched and there are even a few rotational effects thrown in a la Ufouria and Mr. Gimmick.  One odd quirk of the graphics is the disconnect between the happy go lucky normal enemies and the sinister bosses but whatever.  This undoubtedly resides in the NES top 10 graphically.  The music does not rise to the same standard as the graphics.  There are very few level specific tunes; instead each character has their own theme that becomes grating by the end of the game.  While decent it becomes repetitive very quickly.

Unfortunately due to its low sales Little Samson is hard to find and commands prices ranging from $150 to as high as $500.  Personally no game is ever worth that much but should you luck out and find the game at a normal range trust me it is worth every penny.