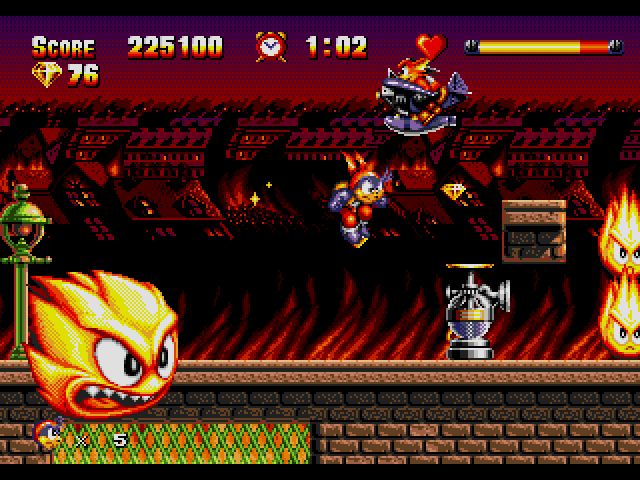 He’s a freaking seal!  Think about all of the mascot platformers you’ve either seen or played in the past.  Mario, Sonic, Crash Bandicoot, Bubsy, Aero the Acrobat……Croc.   They were all based around cool animals (except Mario, but we can excuse him because his games are awesome) but a Seal?  I don’t think there’s ever been a point in time where I’ve thought, “Yeah those guys are awesome.”  Inspiration comes from the strangest places and in the case of High Seas Havoc the game is actually pretty cool and a welcome entrant in the mascot craze.

Havoc and his sidekick Tide are pirates who find a woman named Bridget washed ashore.  Bridget it turns out has a map with the location of a gem named Emeralda on it.  This map just so happens to be desired by Bernardo, who wants the gem to use its power to take over the world.  Bridget is kidnapped, but not before giving Havoc the map, setting in motion his quest.

Data East was one of the last publishers I would expect to hop on the mascot bandwagon.  While they were becoming more active on the console side their bread and butter was still arcade games.  But I guess that platformer money was too enticing to pass up.  High Seas Havoc is heavily influenced by Sonic the Hedgehog, almost to an embarrassing extent.  But although it leans on its Hedgehog inspiration in the early going it soon blossoms into its own beast and becomes an enjoyable romp that is far better than the majority of tripe it shared shelf space with.

Havoc’s offense consists of the family friendly butt bounce and a weird flash kick that is hard to time.  In functionality it’s a lot like the instant shield in Sonic 3 with a wider arc.  The flip kick is reserved for spikey enemies or enemies whose weak point your ass can’t reach, usually bosses.  Learning the timing involved in its use is a frustrating process but luckily you won’t need it much.  It’s a bit disappointing that you don’t have more in terms of offense as it becomes repetitive in short order.  He’s a pirate for Christ sake, why can’t he use a cutlass like the box art depicts?

If you were to slap a pirate theme on Sonic the Hedgehog 2 you’d end up with High Seas Havoc, at least initially. Replace the TV monitors with treasure chests, rings with random treasure, and Christ on a stick there’s even a ten minute time limit.  Not that there aren’t any differences of course.  Treasure only contributes to extra lives, you have a life bar, and the stupid boots you can collect barely upgrade your speed like they’re supposed to.

Each level also has two acts, with the exception of the first and last.  Cape Sealph stylistically skews closely to the Emerald Hill Zone, with its bright blue and green color scheme, skyline, and inclines used to build up speed for platforming.  The first act of Otarucean is eerily similar to the Star Light Zone.  Its second act might remind you of the Labyrinth Zone or the Aquatic Ruin Zone.

But after that the game comes into its own, focusing on tight platforming and less about collecting treasure.  The number of spike traps and bottomless pits increases significantly with less stretches of ground as a safety net.  The Burning Hamlet has a massive living flame that is on your tail at all times, giving the platforming an extra element of danger.  Mt. Chester has many leaps of faith and tricky floating blocks to navigate.  Mt. Bernardo is suitably challenging, on the level of the Metropolis Zone with its numerous mechanical contraptions.

The boss battles feature a similar ramp up in difficulty.  The initial encounter with Bernardo is a simple exercise in timing but the following bosses all become trickier to figure out.  It’s in these encounters where the tricky timing of the flip kick becomes an issue as the hit boxes are small enough that they require precision.  The final battle against Bernardo reaches insane lengths as the bastard now summons Meteors and transforms a la Metal Sonic in Sonic & Knuckles (although this game came first.)  You can expect to lose a few lives in the process.

As a whole the game is fairly challenging but manageable.  You’ll lose a number of lives in the later levels as there are many instances of instant death and cheap hits.  But treasure gems and more importantly treasure (which grant 20 gems) are in ready supply.  You’ll amass a large supply of extra lives quickly and probably lose a decent chunk at the same time.  But the unlimited continues mean you’ll eventually see the end with some perseverance.

As a platformer High Seas Havoc sits comfortably in the middle class of the genre.  Its far better than drek like Bubsy 2 and Awesome Possum but lacks that one critical feature that would push it into upper tier.  With exceptional graphics and animation and a decently long quest I High Seas Havoc is a fun yet challenging addition to the Genesis library.