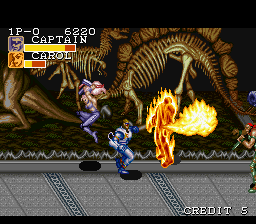 By now I suppose everyone is familiar with Captain Commando through his cameo appearances in the Marvel vs. Capcom series.  But I doubt many are familiar with his original arcade and console debut.  Captain Commando’s appearances have been so sparse he might as well have been a new character by 1999.  So in the face of the character’s new found popularity how does his exclusive adventure hold up?

The story is super hero cheese at its finest.  Captain Commando and his eclectic companions are the protectors of not just Earth but the rest of the galaxy.  Set in the Metro City of 2026 when a super powered gang of criminals under the leadership of a mad scientist run amok the Commando crew spring into action.

Captain Commando was released in 1991 not long after Final Fight.  The two games share a lot in common, from their use of Capcom’s CPS1 board, genre, and general gameplay.  While Final Fight was ported to the SNES in 1991 Captain Commando remained forgotten until 1995.  By that point the beat em up genre had been advanced by titles such as Streets of Rage 3 and the Peacekeepers.  Time was not kind to Captain Commando and its simple gameplay in the face of better games simply doesn’t hold up.

The good Captain certainly had come a long way since his earlier appearances as a semi mascot for Capcom USA.  More than likely birthed from the pen that graced us with the Mega Man 1 box art his faced adorned the boxes and instruction manual of select games and was updated once before his arcade debut.  Captain Commando is decked out with an assortment of items that boost his attacks, from gauntlets that spew fire and generate electricity to boots that enhance his kicks.  If you’ve played any of the Marvel vs. Capcom games his powers are basically identical.  He is the default middle ground character for those too neurotic to take a chance with the rest of his weird posse.

While Captain Commando is a normal human equipped with numerous gadgets and enhancements his comrades are anything but normal.  Mack the Knife is an alien covered in bandages to protect him from harsh environments, granting him a mummy like appearance.  Baby Head is actually a genius infant who created a cybernetic suit to function as his body.  Ginzu the Ninja is the only relatively normal one of the bunch and is a practitioner of the same martial art as Guy from Final Fight.

On the surface the gameplay is exactly like Final Fight but there is a larger selection of moves available for each character.  Most of the standard attacks such as the different throws, and running attacks are shared but differ in their usage.  Ginzu’s dash attack can pierce through multiple enemies while Mack’s will perform two attacks on one enemy.  In fact each character is equipped with two dash attacks and in addition to their selection of throws will determine who you are most comfortable with.

This is a bit longer than your typical brawler at nine levels but each level is in fact a series of multiple smaller vignettes before the boss.  Captain Commando does a good job of introducing new enemies with each level but can’t ultimately avoid palette swapping eventually.  The journey to the end will take you through a variety of locales such as an Aquarium, Circus, and museum.  Occasionally you’ll ride a rocket powered skateboard or other vehicle to break up the hand to hand action but it does little to alleviate the feeling that you’ve done this before.

And that’s its biggest problem.  Streets of Rage 3 saw release in 1994 and had a metric fuck ton of moves per character, branching paths through the game and also multiple endings as well.  Final Fight 3 would follow suit and add a deeper fighting system to its repertoire.  Waiting 4 years to port this game has shed light on its age, an issue that also affected the prior year’s King of Dragons.  In terms of gameplay the game is sound but after years of excellent and sub-par offerings the genre needed to evolve and Captain Commando’s late release showed why.

As a port the SNES version is basically the same but is censored, only 2-player cooperative and missing the mech suits you could steal.  Whether you have the patience to stomach a slightly above average beat em up in the face of better offerings is up to you.