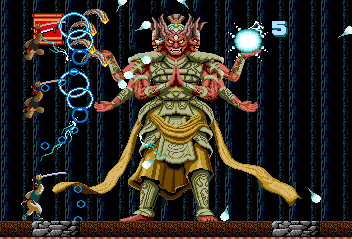 The NES had Ninja Gaiden, the Genesis had the Shinobi series, it’s only right that the Turbo-Grafx get in on that ninja action as well.  Ninjas were all the rage back in the day so why not spread the love?  Irem’s arcade game saw ports to many different formats but it’s the Turbo Grafx-16 version that deserves praise.  Not only is it an excellent conversion but one of the best action games for the platform.

There are many eerie similarities to Ninja Gaiden although both games were released in the same year.  Moonlight is a young ninja who witnessed the death of his father at the hands of a half man/half demon is on a mission of revenge. Rather than the modern day the game takes place in feudal Japan and is less concerned with acrobatic gameplay than pumping out an insane amount of enemies to destroy you.

Over the course of the game’s seven levels you’ll wield 4 different weapons that are supplemented by a number of power-ups.  The default sword is functional and has good range and power.   The throwing stars not only have a wide spread but are insanely fast.  The exploding tags are slower but pack a punch and can also take out more than 1 enemy as it leaves a deadly cloud in its wake.  The sickle and chain trades power for the widest area of attack with its ability to be spun in a circle.  You begin the game with all 4 weapons and can switch at any time which is near mandatory at certain points.

Backing up the default weapons are a few power-ups dropped by enemies.  The ninja blade can be enhanced so that that it leaves a massive trail in its wake.  You can also create two clones of your body which function exactly as they do in Ninja Gaiden 2.  They mimic your actions and weapons, meaning you can literally cover the majority of the screen in a shower of shuriken if you so choose or  position them to do all of your work for you.  Lastly there is a rare screen clearing gem that will eliminate all enemies for a few seconds, handy if you’re having trouble progressing.

Ninja Spirit at its essence is Contra with a sword.  There is rarely a moment when there aren’t a few enemies aiming for your head and upwards of 4-6 seems to be the norm.  It can be overwhelming at times and will force you to learn which weapon is the best for any given situation.  Each new level introduces new enemies that are vulnerable to at least one weapon in your arsenal, it’s imperative to switch as they often require multiple hits before death.  While it’s tempting to pick a favorite and stick with it there are portions of the game that become all but impossible if you choose to be hard headed.

The levels themselves aren’t very long but due to the constant barrage of attacks feel twice their length.  Moonlight has absurd leaping power but very few stages allow you to exploit this to avoid conflict.  In some ways this feels like a better executed Legend of Kage or Demon Sword with less vertical elevation.  The boss battles are suitably intense and show off the system’s prowess in their size and detail.

Depending on the mode Ninja Spirit is one of the hardest games you’ll ever play or a slightly tamed beast.  For the most part Ninja Spirit is a tough game even in spite of the near game breaking shadow clones.  There are so many enemies attacking at once that the game eventually reaches its breaking point and will slow down.  PC Engine mode allows you to sustain five hits before death although larger enemies can take you down in a single blow.  Arcade Mode is exactly that, with one hit death its rule.  At only 7 levels you’ll have the game licked in no time so if you really want a challenge Arcade Mode is the way to go.

While I like the game overall there is a slight lack of depth compared to its contemporaries.  Had the game been longer with slightly more intricate level design this would have been an absolute knock out.  As is it will have to settle for pretty good.