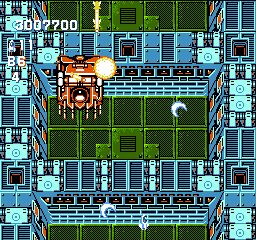 For a system with such a slow processor the NES sure did receive more than its fair share of shooters.  In some ways it comes with the territory; when you’re number one everyone wants a piece of that apple.  The specialists in the genre such as Konami and Compile graced the NES with many a classic but even I struggle to describe Gun Nac, a little known shmup that came and went with no fanfare.  Its cases like these that I live for, where I can extoll the virtues of a lost gem.

In the distant future humans have exhausted Earth’s resources, prompting a mass exodus to the artificial solar system IOTA Synthetica.  Things seemed to be going well until a freak wave of cosmic radiation swept across the galaxy, causing normally inanimate objects to spring to life and attack.   The galactic federation turns to legendary hero Xan to save the cosmos from this unnatural threat.

Yes indeed, it’s another in the long line of one ship against an entire empire.  Gun Nac from its looks to its weapons comes across as Zanac’s wacky older brother.  This is fitting since both games were made by Compile.  However outside of its slightly cheery exterior lies an excellent shooter that is challenging enough to compete with the best of NES shmup library.

On its face the weapon selection is fairly robust with 5 primary weapons and also 5 different bombs at your disposal.  Like Zanac these are numbered with weapon pods flying in at regular intervals.  The multi-directional Blaster, Screen Buster Bombs, Homing Search Driver, Dragon Napalm, and Wide Beam are more or less self-explanatory.   Each can be upgraded by collecting more of the same, up to three times for devastating results.  The Blaster at its highest level will also fire backwards as well as forward.  The Screen Buster bombs will not only explode but also release a burst of smaller shots as well.

Bombs also follow along the same lines.  It might seem like overkill to have numerous different bombs but their functions warrant closer inspection.  Water bombs rain down from the sky and cover a wider area at high levels but suffer a slight delay.  The Fire Bomb creates a ring of fire that will also protect you if you stay in its center.  When powered up you have two big ass rings covering your ass.  Leveling up your bombs increases the power but comes with a price as the cost of each is doubled.

At 8 levels Gun Nac covers a lot of terrain.  There are a ton of enemies that swarm from all sides, sometimes as many as 20 or more with little to no slowdown.  There’s an option to prioritize the game’s engine in terms of speed (less slowdown, but more flickering) or graphics (more slowdown, less flickering).  It’s an interesting choice but regardless the game’s intensity isn’t really hampered.   The enemies will come in the familiar patterns but in the middle of all the chaos it’s easy to get lost.  While it is convenient to have so many weapons at your disposal it will definitely behoove you to learn the idiosyncrasies of each in order to survive unscathed.

Although Gun Nac frequently becomes hectic it is still one of the most balanced shooters in the NES library.  Weapon drops are so frequent that it’s actually overwhelming.  The penalty of dying is less than in most shmups as a result.  The money you pick up can be used in the shops between levels to power-up your weapons if you don’t feel like leaving it to fate.  No matter how crowded the screen there’s always the sense that you’ll make it out okay.

Gun Nac is one of the fastest shooters for the NES, probably only rivaled by Recca Summer Carnival or Crisis Zone.  The previously mentioned option of speed or graphics ensures that you’ll have a relatively smooth gameplay experience at all times.  A lot of the graphic motifs are reminiscent of Zanac but 5 years of polish have taken those (possibly) recycled assets to another level.  The zany story means you’ll be facing some strange bosses, such as the Hello Kitty inspired cat who chucks loose change in stage 5 or the Robot bunny of stage 1.  I suppose Compile wanted a breather after the seriousness of Guardian Legend and if so we as gamers lucked out if this was the result.

It’s strange that a forgotten gem like this hasn’t had its time in the spotlight in this day and age.  As rabid as the shmup fan base is there are very few reviews for Gun Nac on the internet.  I’m more than proud to add to the list when it’s a game of this quality.