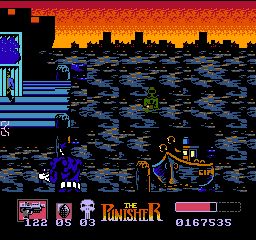 It’s kind of funny how so many of the early Marvel movies from the early 90s have been forgotten in light of their recent cinematic success.  To be fair there’s a reason why; have you seen Captain America?  Yikes!  Rubber ears and terrible acting abounds in that abomination.   And don’t get me started on the Fantastic Four film that was shot to keep the license; it’s worth viewing just for the hilarity.  The Punisher film starring Dolph Lundgren went straight to video and is lost in obscurity, along with this NES game that follows much of the same plot.

There is no overarching plot to the game other than Frank Castle continuing his war on crime and doling out his own personal brand of justice.  Numerous cameos from the comic come in the form of the villains, such as Jigsaw, the Kingpin, and Silo.  While you get brief monologues from Frank himself between levels the focus is squarely on the action.

Rather than a typical side scrolling action game like Contra LJN went a different route, creating a third person rail shooter like Cabal.  Much like Operation Wolf the camera moves along a set path as you blast nearly everything in sight.  Games of this particular genre aren’t too common, especially on the NES so the Punisher was a welcome addition the console’s library.  In spite of some niggling issues the game is pretty accomplished shooter and one of LJN’s better games, which on one hand isn’t saying much considering their history but the game deserves to be respected.

While the Punisher has a massive arsenal of weapons at his disposal in the comics the game keeps it relatively light.  A machine gun will replace your standard hand gun until it runs out of ammo while grenades will kill anything within its small radius.  The rocket launcher has a wider spread but is harder to come by.  Managing ammo is important as once you run out you are stuck firing only one slow bullet at a time, which is a virtual death sentence considering how hectic the game gets at times.

The environments in the game are highly destructible with nearly every element yielding some form of item or newspapers that give clues to secrets.   Extra ammo and items are hidden everywhere and its impossible to survive without destroying everything to resupply.  The waves of enemies are paced in such a way that you’ll have a few seconds to breath and “search” before they come back with a vengeance.

Enemies populate nearly every corner of the levels, from manholes to glass windows and even alleyways.  It’s never a good idea to feel as though you can identify where they’ll show up as it could literally be anywhere.  Sadly there are very few enemy types so after one or two of the game’s six missions you’ll have seen them all.  While the game tries to switch up the combinations in which they’ll appear it does get repetitive towards the end.

While the viewpoint makes it easier to avoid some shots it isn’t without its issues.  Due to the Punisher’s size you’ll soak up more bullets than should be necessary since he isn’t exactly nimble moving from one end to the other.  Boss battles are incredibly unfair since they all spray bullets in such a wide radius that taking hits is unavoidable.  Even worse, many of them will come in close and initiate hand to hand combat which doesn’t work.  They attack faster than you and you have no way to dodge or block blows, meaning you’ll take large chunks of damage before they retreat.  Overall the game isn’t too hard, just unfair in parts.

The graphics are pretty amazing and do a good job recreating the decaying streets of New York.  The game has a very comic book style look to it and uses the NES’s color limitations to create a subtly dark mood pretty effectively.  There’s a shit ton of detail in every environment and it all crumbles spectacularly under your fire.  You can see where the sacrifices were made to achieve this level of detail in the enemy sprites; they’re terrible.  Not only are they drawn so badly that they look out of place the animation is pretty poor as well.  For all the detail in the backgrounds there is a pretty limited set of locations; only about 4-5 which are repeated at least 2-3 times each.

Overall the Punisher is an above average rail shooter on a system with very few to speak of.  There were many terrible comic book games on the NES and luckily the Punisher is not among them and is an enjoyably short ride for what it is.