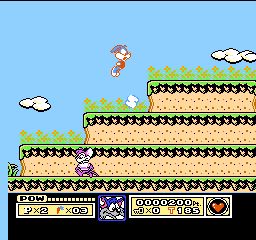 For the publishers that hung in there toward the end of the NES life it might as well have been a license to print money.  With an audience in the millions and years of platformers under their belts most publishers probably had plenty of engines they could use to spit out a game in record time.  This is probably the route Konami chose in creating Tiny Toon Adventures, an otherwise solid game that makes very little use of its license and is therefore indistinguishable from the majority of similar games on the platform.

Babs Bunny has been kidnapped by Montana Max and it’s up to Buster and pals to save her.  Spread out across six worlds with 3 sub levels each (with one exception) the game supposedly takes place in and around Acme acres but you wouldn’t necessarily know that.  The levels are the stock platformer tropes personified, which speaks to a larger problem with the game.

Outside of a few cameos from the show you could easily drop Kirby or any other character in this game without batting an eye.  Overall the game is solid but could have made better use of the Tiny Toons world like its 16-bit cousins to elevate it above the dregs it shared shelf space with.

At the beginning of each world you have a choice of 3 partner characters: Plucky, Dizzy Devil and Furball.  Each has a special ability that comes in handy to find secrets or even shortcuts through each level.  Plucky can glide, Dizzy Devil can become a whirling tornado to smash enemies and obstacles and Furball can climb nearly any surface.  Once selected you’re stuck with them until the next world so choose wisely.

The levels are constructed in such a way that it isn’t mandatory to use one particular character, which makes sense since you can’t switch freely.  Collecting a star ball will change characters, a change that lasts until you pick up another to switch back.  Overall the level design is fairly strong, with multiple paths available depending on your partner.  Despite the large number of levels the game is short; most levels are only a minute or two long with each world ending in a forgettable boss battle.

As solid as the game’s mechanics are it can’t help but feel familiar.  You collect carrots which award extra lives from Hampton at the end of each level.  Regardless of the protagonist your main form of attack is the tried and true butt bounce.  You travel through forests, underwater levels, and the desert.  You see where this is going?

The game’s challenge is on the light side during the first half of the game then becomes cheap for the latter portion.  The enemy placement becomes devious and there are a large number of unseen traps waiting to get you, such as the garbage cans in world 4.  Without a heart you can only sustain one hit before death, which comes frequently towards the end.  Montana’s mansion takes the cheap mechanics to a new level and quickly becomes hair (heh) pulling hard in an effort to stretch out the game.

There’s nothing here that necessitates the appearance of the Tiny Toons characters, leaving little more than a generic platformer in a Looney Tunes skin.  There are far better games to spend time with than to bother with an average Mario clone.