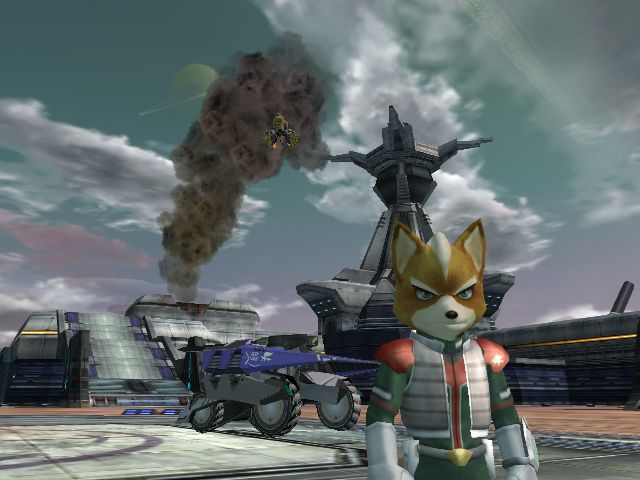 This should have been a match made in heaven.  When Nintendo and Namco announced a joint collaboration to create the next Star Fox in the summer of 2002 heads turned.  With the Ace Combat team at the helm along with Shigeru Miyamoto and EAD supervising the results could only turn out legendary.  However as the years passed with little or no mention of the game elation turned to doubt.  Would the alleged development troubles affect the final product?  In the end what we would end up with is a solid entry in the Star Fox series with some misguided gameplay decisions.

With Andross defeated the Cornerian army is busy destroying the remnants of his empire which is now under the control of his nephew Oikonny.  No sooner is Oikonny dealt with than a new threat approaches, the Aparoids.  Part machine, part organic life, the Aparoids exist to convert all living matter into Aparoids like themselves and join their hive mind.  With an even bigger threat to the galaxy at hand the Star Fox team is called in to action, with Krystal replacing Peppy.

Released in early 2005 Star Fox Assault featured nearly of all the staples the series had become known for but differed in many ways.  Far more story heavy than prior entries the plot driven action means the galaxy map with multiple paths is gone.  The linear chapter progression allows the game to tell a focused plot but hurts the game’s replay value in the process.  While I can appreciate the effort to build a concerted narrative story is ultimately not what we play Star Fox for.  This is only the first in a series of gameplay decisions that ultimately harm the game; there isn’t any one critical flaw that brings the experience down but a series of smaller missteps that add up to ruin your overall enjoyment of the game.

Those that dreamed of epic space faring battles in a decked out Arwing can rest easy as Star Fox Assault at least gets that right. The Arwing levels are everything you could possibly dream of; epic in scale, beautiful, and control like a dream.  The opening Chapter is a massive fight against the entire Oikonny fleet and is just as epic as you would expect given the GameCube hardware.  What EAD managed to pull off with the Katina level in Star Fox 64 seems like child’s play compared to this battle.  Of the game’s 10 missions about half are Arwing based with the rest comprised of ground missions.

The ace gamers who combed every inch of Star Fox 64 were able to eventually unlock on-foot combat in the game’s multi-player mode.  That makes a return in Assault except it’s given a shot in the arm for the story campaign.  As Fox you can collect a series of weapons ranging from rocket launchers and machine guns to laser pistols.  These missions usually charge you with destroying a set number of targets in an enclosed space with masses of enemies strewn about.

The ground missions are an interesting diversion but are also boring.  Every mission plays out the same, aside from the few times you can hop in an Arwing or the Landmaster tank, usually to deal with larger enemies or bosses.  Star Fox 64 had a few missions with the tank and submarine but they were used for specific reasons and had more interesting objectives, such as destroying the supply train on Macbeth.  The ground levels comprise half of the game, with 2-3 levels taking place on a planet’s surface before stepping back into an Arwing.  This hurts the game’s pacing considerably.

The controls don’t help these missions either.  While the default scheme is serviceable it never reaches the level of intuitiveness that it should.  Fox moves a little too quick for the way the environments are designed, leading to many awkward falls and hits as a result.  Controlling the Landmaster isn’t any better.  The tank is slow as it should be but turns like a drunken walrus.  You can flip sideways which helps combat but maneuvering the cramped environs is a chore.  These control problems are exacerbated by the need to save your squad members every so often, which is stupid.  Following a jet on foot and trying to target lock speedy enemies is frustrating when you can’t even see where they are.  It should be the other way around in my opinion.

One area that Star Fox Assault does not slack is in the graphics.  This is an insanely pretty game at times and represents everything we dreamed of after Star Fox 64.  Space combat has not looked this good since Rogue Squadron 2 & 3 with massive space armadas, tons of space debris, and explosions galore with little hit to the frame rate.  Taking a dip below the clouds and going planet side reveals a startling amount of detail in the environments and the mechanical designs of the enemies fit perfectly within the Star Fox universe.  Although the on foot segments don’t manage to keep up the same level of detail the size of the environments makes up for it.  The music does not keep pace with the graphics unfortunately, consisting of remixes of past music and the few original tracks leave something to be desired.

Without multiple paths to the end of the game the story campaign only lasts a few hours.  The game’s replay value comes in the form of a survival mode and multi-player.  Survival tasks you with completing the story mode without saving but doesn’t offer substantial rewards for doing so.  The multi-player is somehow less engaging then its N64 counterpart despite featuring the same options and even more content.  Some of the campaign levels can be unlocked for competitive play and they work seamlessly at that.  But the overall level design for multi-player is lacking.  While the few stages available in Star Fox 64 were small they were immaculately designed, small enough to force confrontation but open enough that you can skillfully evade enemy fire.  That Namco didn’t take the multi-player in a new direction or advanced it beyond a game from 1997 smacks of a missed opportunity.

In the end that’s what Star Fox Assault ultimately is: a missed opportunity.  This could very easily have been the definitive Star Fox game with a few slight tweaks.  While the graphics and scale of the game are nice the pacing and mission structure are not on the same level.  What could have been an excellent entry in the series is only a solid rail shooter in the end.